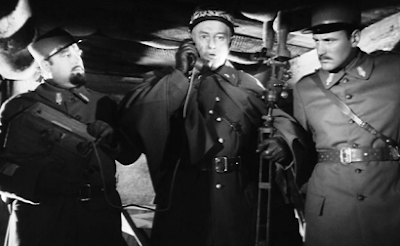 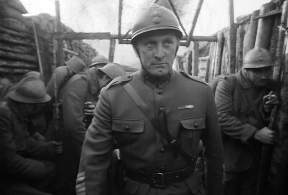 Paths of Glory takes place in 1916 France, not that any of the actors, especially lead Kirk Douglas as Colonel Dax, sound particularly French, but that hardly matters because this tale about the absurdity of war could have been set in any time in any country in any war. Kubrick's film is unusually short, at least for a war film, running less than 90 minutes. For those who haven't seen it (and shame on you who haven't), Paths of Glory centers on one particular battle between the French and the German, where the poor French troops are outmanned and outgunned, but that's no excuse for disobeying orders in the eyes of Gen. Mireau. Mireau believes anything is possible and some things aren't. When he asks a soldier if he's ready to kill more Germans and the catatonic man can't respond, he refuses to accept the explanation that the man suffers from shellshock because he doesn't believe there is such a thing as shellshock. 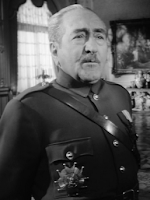 When the soldiers are forced to retreat, Mireau even orders his artillery men to unleash their barrage on his own troops. With most of his troops unable to take the hill he seeks and others under his command refusing to carry out his lunacy, Mireau smells mutiny in the air and demands satisfaction. "If those little sweethearts won't face German bullets, they'll face French ones," Mireau declares before meeting with his superior, Gen. Broulard (the great Adolphe Menjou) and Dax, who oversees the men, to start court-martial and execution proceedings. Dax clearly sees Mireau's derangement, as the general first asks to execute 100 of the surviving soldiers. Dax even volunteers to stand in for his men, before Menjou brokers a compromise, first getting the numbers down to 12 before settling on 3 (1 from each company). Mireau unhappily accepts, though he'd prefer to see more bloodshed instead of less. "Few things stimulate morale like seeing a man die," he insists. Dax, clearly the voice of reason and principle in the film, agrees to represent his men in the court-martial, a farce of a trial reminiscent of other court proceedings where the defense might as well not show up.

The focus of the movie, whose script was written by Kubrick, Jim Thompson (the famed cult crime novelist) and Calder Willingham (who would 10 years later co-write The Graduate), doesn't focus solely on the ranking officers involved, but also uses the fate of three soldiers: Pvt. Ferol (Timothy Carey), Pvt. Arnaud (Joseph Turkel) and Capt. Paris (Ralph Meeker) as an occasion to discuss a multitude of issues. The three were picked almost at random, with the brass passing on the decision of choosing "examples" to the leaders of their divisions. Ferol says he was picked because he was "undesirable." Paris was picked to cover the ass of his lieutenant (Wayne Morris), who he'd caught drunk on duty at the cost of several lives. Arnaud really doesn't know why he's facing a firing squad. 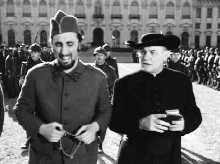 Once the men have been found guilty and spend their final night of life together in a cell, a priest comes to comfort them, but Paris turns justifiably angry when the clergyman tries to comfort him with the idea that, "We're all gonna die." His confrontation over the futility of religion finally gets to be too much for the other condemned men, one of whom attacks him, leading to an eventually fatal skull fracture. However, Mireau want his "examples" conscious for their executions, so they work to keep Paris alive with a plan of pinching his cheeks at the crucial moment so he'll be able to see the bullets coming. The message: Don't ask questions about religion or warfare. It's not really a plot spoiler to say that the three are executed. (Mireau thinks "the men died wonderfully.")

Prior to the firing squad, Dax learns of Mireau's order to fire on his own troops and brings it to the attention of Broulard, but he's reluctant to interfere. After the executions, Broulard meets again with Mireau and Dax and confronts Mireau about his order and of his intention that Mireau will face a court-martial, albeit too little, too late for the three soldiers. Mireau remains defiant, insisting he's "the only completely innocent man in this affair." While Dax is glad to see that Mireau won't get off scot-free, he's appalled when Broulard suggests that Dax reported Mireau's actions as a political move so he could get promoted to general. Broulard, in the end, might be even sicker than Mireau.

The final scene often seems out of place, but it really underscores the whole message. The tired soldiers gather in a dance hall where a captured German girl is forced to dance for them. Kubrick may well have been the master of making anti-war war films, be it Paths of Glory, the hilarious Dr. Strangelove or the underrated Full Metal Jacket. Paths of Glory is a great place to see Kubrick's talents really begin to emerge.