Fearing we are powerful beyond measure 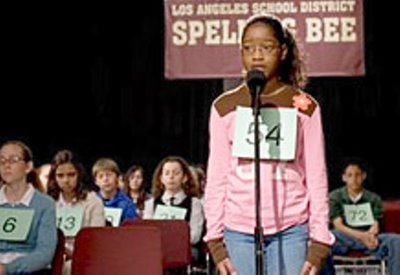 "Our deepest fear is not that we are inadequate. Our deepest fear is that we are powerful beyond measure. We ask ourselves, Who am I to be brilliant, gorgeous, talented, fabulous? Actually, who are you not to be? We were born to make manifest the glory of God that is within us. And as we let our own light shine, we unconsciously give other people permission to do the same."
Marianne Williamson

By Edward Copeland
Dr. Larabee (Laurence Fishburne) has young Akeelah Anderson (Keke Palmer) read the quote that he has framed on the wall of his home office as he tries to connect with the 11-year-old, a spelling prodigy from inner-city Los Angeles he's coaching for a hopeful trip to the national spelling bee in Washington. Akeelah and the Bee is a very good film that fails to make the leap to greatness only because of the cliches and formula turns that can be seen coming a mile away in writer-director Doug Atchison's screenplay (and about three musical montages too many).

Despite these handicaps though, Akeelah and the Bee still soars, thanks especially to young Palmer who really carries the entire film on her young shoulders.

Sure, there are many fine actors around her (Fishburne, Angela Bassett and Curtis Armstrong, to name a few), but the entire enterprise wouldn't prove as riveting and touching as it is if not for Keke Palmer. She's got the sass and the smarts of her character down pat and truly makes a viewer care for her plight even while the film's structure makes it clear how the beats of the story are going to play out.

Fishburne, who also was one of the film's producers, plays Larabee well, as you'd expect, but it's very reminiscent of characters he's played before. Bassett is good, though she's saddled with the role of the skeptical mom who predictably comes to cheer on her daughter's spelling quest.

For fans of HBO's great television series The Wire, there is much in Akeelah and the Bee that will play as if it's a companion piece to this season's story arc, with failing inner-city schools and even the presence of Julito McCullum (Namond on The Wire) as Akeelah's would-be gang-banger older brother.

Comments:
I haven't seen this film - but there's a character in it who's a would-be rapist??

I'm a white boy from the burbs - I'm behind in my street slang.

It's really warm, wonderful film. My review is here.