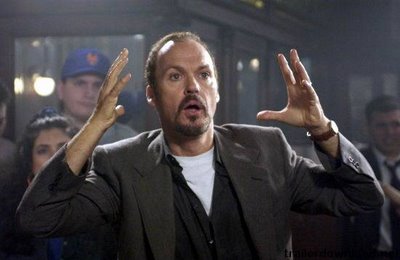 By Edward Copeland
Having read some positive reviews and wondering what a Don DeLillo screenplay would be like, I looked forward to the release of Game 6 on DVD, since the film never played near me. My expectations weren't really that high, but it didn't help. While the movie contains some positive attributes, it never quite jells. Michael Keaton stars as Nicky Rogan, an award-winning playwright whose latest work is about to premiere on Broadway at the same time that his beloved Boston Red Sox are playing in the 1986 World Series. Keaton's performance really is the best thing Game 6 has going for it — he's looser and more wry than I've seen him in a long time.

The great novelist DeLillo has touched upon baseball and America before, most notably in Underworld, and this is his first filmed screenplay, but it feels more like a one-act play — and not a particularly interesting one.

Rogan frets about the play's opening, worrying about a potentially damning review from a harsh theater critic named Steven Schwimmer (Robert Downey Jr.), who has offended so many with his reviews that he basically lives in hiding out of fear for his life, and dealing with a leading man (Harris Yulin) who can't recall his lines because of a brain parasite he caught while in Africa.

Rogan also finds himself estranged from his daughter (Ari Graynor) and dealing with a down-on-his-luck theater associate (Griffin Dunne) who feels Schwimmer destroyed his career.

Directed by Michael Hoffman, Game 6 comes off more as an essay than a movie, though its thoughts on criticism, theater and baseball aren't particularly insightful or entertaining. Thankfully, the film's running time of less than 90 minutes is mercifully short.

In the end, Game 6 puzzled me more than it engaged me. Keaton does deliver his best performance in quite some time, but once the film ended, my main reaction was a ho-hum one. I've already forgotten that I've seen it.

Comments:
I agree totally. After the RAVE reviews from Ebert and Roeper (the latter I agree with very often). But Game 6 just didn't do it for me for the reasons you said.

I felt more generous to Game 6 than you, even though I recognize it as a mess. It has a density, and some great internal resonances.

For me, the best is the way that Harris Yulin's forgotten line works with Keaton's state of mind. Both need to be reminded of the obvious -- that the line that was just said to him is the one he needs to say in one case, and that the Red Sox must lose in the other.