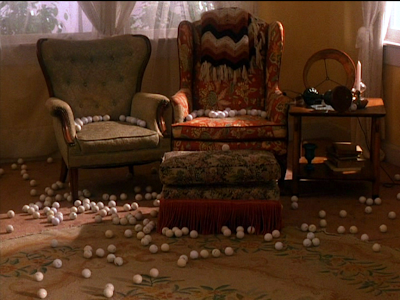 By Edward Copeland
The horror has been revealed, though Twin Peaks is unaware that BOB-possessed Leland has claimed yet another victim as Maddie's body hasn't turned up. Leland is practicing golf in his living room. Not putting mind you — actual swings. When James and Donna drop by to see Maddie off, they think it's just eccentric Leland, though they are sad to hear that they missed Maddie, who Leland says he dropped off at the bus station about 20 minutes before. "She was a little disappointed" that they didn't come to see her, Leland tells the teens. Once they leave, he smiles back at BOB in the mirror as he grabs his golf bag out of the closet with Maddie's corpse inside. Leland plops the golf bag into the truck of his convertible and puts the top down, driving off while humming "Surrey With a Fringe on the Top." 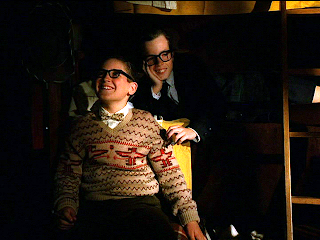 Meanwhile, the man who has been charged with Laura's murder, Ben Horne, gets a visit in jail from his brother Jerry, who informs him that since his regular mouthpiece (Leland) also has been charged with murder, he'll have to act as Ben's lawyer. Ben informs Jerry that his alibi for the night Laura died happens to be the still presumed dead Catherine. Jerry says that's not good, but the bunk beds in the cell remind him of their days as children when their baby sitter would dance for them in the dark with a flashlight. The memory makes the brothers smile as Jerry asks, "What's become of us?" Lucy returns from her trip with her sister Gwen (Kathleen Wilhoite) and Gwen's baby in tow. Lucy introduces Gwen to Hawk and Gwen apologizes for the despicable things her race has done to Native Americans, though Hawk reassures her that, "Some of my best friends are white people." 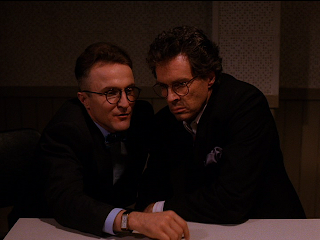 Cooper and Harry run into Leland in the lobby of the Great Northern, where he's dancing around with a golf club. They figure this means he's probably unaware of Ben's arrest. They go up to see him and he says, "Call me Fred." Harry gives him the news and Leland says he thought Jacques Renault killed her. When Cooper answers no, Leland says that the law will handle this and goes off to a corner where he starts to cry, but quickly starts laughing maniacally. Once he sees that the lawmen are gone, he returns to his dance. Back at the jail, Doc Hayward takes a blood sample from Ben and Cooper reads a passage of Laura's diary to him. Jerry attempts some legal mumbo jumbo to no effect and after Cooper and Truman leave, tells Ben that as his friend, his brother and his attorney, he strongly suggests that Ben find a better lawyer. Ben may have even more problems hanging over his head as Bobby plays the cassette he found in Leo's boot and hears Ben and Leo discussing the plot to burn the Packard Mill. He tells Shelly that since their cash cow (aka Leo) has turned into a sinkhole, this may be their chance to strike it rich courtesy of Horne. 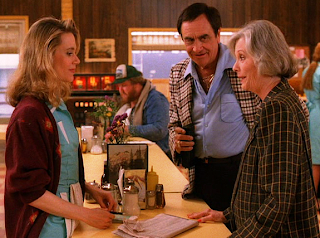 A visitor steps into the Double RR and Norma seems none too pleased to see her, since it's her estranged mother Vivian (Jane Greer), who has brought along a surprise new husband as well, a financial analyst by the name of Ernie Niles (James Booth). Norma apologizes for her tension, telling her mom that they are anticipating the arrival of a travel critic and she wants everything to go well. After Ernie finishes making a phone call, he suggests that he and Vivian go check in to the Great Northern and they depart, though Norma notices that on the newspaper Ernie was holding were some notations indicating some kind of sports betting. At the Great Northern, the One-Armed Man reminds incoherent and under guard, though once he gets the nurse out of the room, he knocks the guard out and apologizes as he makes a run for it, sensing that BOB is close. Back at the diner, Hank turns up, apologizing for being late, though Norma insists that 48 hours is a bit more than late and Hank offers the excuse that people from his past want to see him fail. 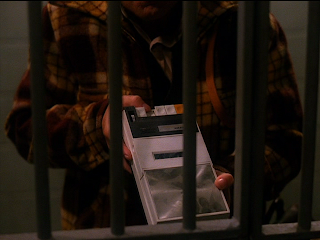 Pete pays a visit to Harry at the sheriff's station as Harry is taking note of a woodpecker outside his window. Pete informs Harry that Josie is gone, not realizing that Harry already knew it. They then compare notes, realizing that the man Josie introduced to Pete as her cousin Jonathan she introduced to Harry as her assistant Mr. Lee. Pete says he's got a "bad feeling" about this. Andy comes in the station and, upon seeing Lucy holding her sister's baby, promptly faints. Pete also pays a visit to Ben in his cell, saying he has a message for him and pulls out a tape recorder which soon plays Catherine's voice saying she'll back up his alibi for the night Laura was killed, provided that Ben sign the mill and Ghostwood over to her. Ben is understandably upset, realizing he's been set up, but Pete is tickled pink as he exits. "She's a caution, isn't she?" Pete laughs.

A clearly deranged Leland is swerving from side to side on the road while singing Rodgers & Hammerstein's "Surrey With a Fringe on the Top" from Oklahoma! At the same time, Cooper is humming the same song as he rides with Harry in his cruiser and they nearly collide with Leland. Leland acts embarrassed and apologetic and says he must have been thinking about Ben. "It's a good idea to leave your troubles at home when operating a vehicle," Cooper suggests. Leland then says he remembers Ben talking to someone the night he died about a dairy. Cooper suggests he could have heard diary and Leland says that could be. He offers to show Cooper his golf clubs and it looks like he's ready to whack Cooper over the head with it when Truman gets a call that they've found the One-Armed Man and the lawmen take off. Leland gets back in the car and BOB stares back at him in the rearview mirror. 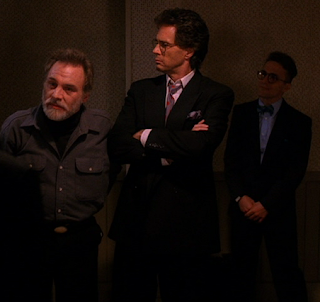 Andy, nursing a head wound, tries to tell Lucy about the results of his sperm test, but her buttinsky sister Gwen keeps getting in the way until both of them finally tell Gwen to shut up and Andy finally is able to tell Lucy he isn't sterile. Now that Gerard is back in custody, they take him to Ben's cell and the One-Armed Man circles him, saying that BOB has been close, but he's not there now. Jerry asks who BOB is and notes that Gerard's "stairs clearly don't reach the attic." He tells them to charge Ben or let him go which Harry swiftly does. Outside, Cooper tells Truman that they may be jumping the gun but Harry has had enough mumbo jumbo, dreams, visions, dwarfs, giants and hocus pocus. He thinks their evidence is strong enough to justify Ben's arrest and stands by it. As Hank and Norma dine with Ernie and Vivian at the Great Northern, Hank notes once the ladies leave that Ernie is an ex-pal from prison and assumes he's got a scheme going to get Vivian's money. Ernie says he met her at a GOP fundraiser, but that he's trying to go straight.

Back in his room, Agent Cooper prepares to retire for the evening, telling Diane that "the last few steps are always the darkest and most difficult." Soon, he hears a knock on the door and finds Audrey, who wants to reassure him that she didn't put out at One Eyed Jack's and asking if what she told him led to her father's arrest. A phone call interrupts their talk and Cooper tells Audrey to go to her room and lock the door. Soon, he and Truman arrive at a dark scene of much activity where there is yet another body wrapped in plastic, only this time it's Maddie Ferguson. 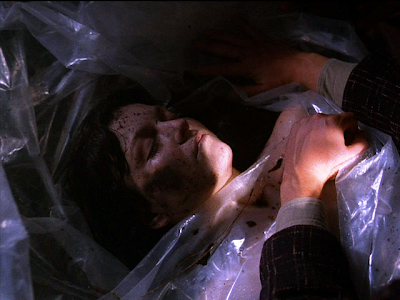