From the Vault: Waking Life 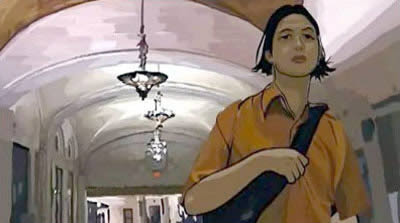 At one point in Waking Life, four men spot an old man perched atop a telephone pole, though he offers no reason why he's there. "He's all action, no theory," one of the young men says. "We're all theory, no action." The young man's self-analysis aptly describes Waking Life, a visually striking but ultimately unsatisfying film from writer-director Richard Linklater.

Waking Life stems from a branch of the same film family tree that produced Linklater's great Slacker, which strung together a series of disconnected scenes as it traveled from one person to another in Austin, Texas.

What sets the new movie apart is that it was filmed with live actors then artists animated those images, creating an arresting and fanciful visual experience. Unfortunately, that's about all that's interesting about Waking Life.

The film follows an unnamed protagonist (Wiley Wiggins), a young man who may be "asleep in life's waiting room." He's never certain whether he's awake or not as he drifts from one philosophical conversation to another, often in scenes where he's not even present.

Many of these snippets are entertaining, but since there's no engine to push you from one scene to the next, every time a conversation falls flat, so does the movie.

As a writer, Linklater always has loved conversation, as seen in films such as Slacker and Before Sunrise, but the channel-surfing approach wears thin here. On the other hand, the animation astounds at times, with many clever embellishments. The style of the drawings makes the entire film seem liquid, as if everything floats around its characters.

The sad truth though is that if the film didn't have its animated element, it'd be a disjointed, live-action bore. Waking Life is interesting but, like most dreams, they lose something when you try to share them with others.