From the Vault: Shrek 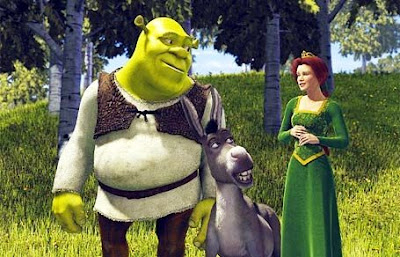 With a wicked spirit of fun and more cultural references than a year's worth of Dennis Miller Live, Shrek proves a delightful antidote to the increasingly formulaic world of the animated feature.

Aside from Toy Story and Toy Story 2, animated movies for the entire family have decline in the years since Aladdin. The films themselves look great, but the stories and music leave a lot to be desired (RIP Howard Ashman).

Mike Myers brings life and a Scottish brogue to the title character, a bitter ogre trying to get by alone in his swamp when evil despot Lord Farquaad (John Lithgow) exiles all fairy tale creatures there. Suddenly, Shrek finds his life turned upside down, especially by a talking donkey, aptly named Donkey and voiced by Eddie Murphy, who gets to have a lot more fun with his voice role here than he did in the lackluster Mulan.

In order to restore order to his world, Shrek makes a deal with Farquaad to rescue the fair Princess Fiona (Cameron Diaz) so Farquaad can make her his bride. Like the Toy Story films, Shrek uses the latest in computer animation techniques and they are even more impressive here, with realistic facial expressions that make for an amazing look.

In many ways, Shrek may entertain adults more than children since grown-ups will get a bigger kick out of the skewering of fable conventions and the nods to other cultural signposts.

It's no accident that this DreamWorks production gives a lot of gentle ribbing to the Walt Disney factory, even to the point that Farquaad slightly resembles its chairman, Michael Eisner. The music choices are fun as well and, if nothing else, Shrek will likely be remembered as the first animated film to use a song by Leonard Cohen.

For those worried that Shrek may be all cynicism and no heart, there even is the tried-and-true message of not judging a book by its cover. Thankfully, the sentimentality doesn't last long enough to risk sugar overload.