From the Vault: Say It Isn't So 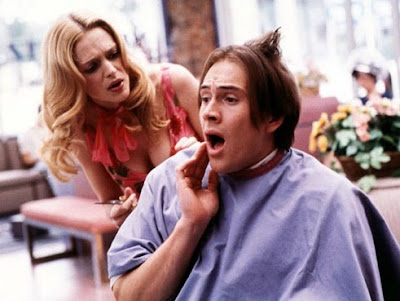 If watching Sally Field prepare a sandwich with bread she's wiped across her armpits tickles your funny bone, then you couldn't ask for a better gift than Say It Isn't So. However, if you prefer your comedies to have good timing, solid laughs and surprises, do everything in your power to avoid this monstrosity.

Chris Klein stars as Gilly, an Indiana animal shelter worker who can't commit to a relationship because of unresolved issues over growing up in an orphanage. All that changes when he happens upon Jo (Heather Graham), the world's worst hairstylist. Soon, the two are madly in love — but fate intervenes.

Let's keep what interferes a secret — just in case someone has the misfortune of sitting through this junk. It can serve as a test of moviegoing skill: See how long it takes you to anticipate every plot move and punchline, then time how many minutes elapse until the film catches up with you.

It is my firm belief that given the right circumstances, just about any subject can provide comic fodder, but Say It Isn't So bungles its attempts to squeeze laughs from stroke victims, amputees and mental patients. The results don't come off as funny, just tasteless.

The script even tries to summon smiles by injecting references to other movies. In one scene, as a plane flies over a river, they put Wagner's "Ride of the Valkyries" on the soundtrack to remind savvy viewers of Apocalypse Now, though that film had at least 20 times as many laughs as Say It Isn't So.

Klein began his screen comedy career in the great Election, followed that with the cruder but not-without-its-charms American Pie and now devolves to Say It Isn't So. If this trajectory continues, I predict his next film will be either a big-screen version of My Mother the Car or a straight-faced remake of Plan 9 From Outer Space.

Why Field took this role as Jo's scheming mom will be one of the world's biggest mysteries. My best guess would be financial problems and, if that's the case, I suggest we start a trust fund so Sally need never be embarrassed in garbage like this again.

The sole saving grace is Orlando Jones as Dig, the legless pilot who befriends Gilly. He doesn't get material that's any better than the rest of the cast, but he throws himself so enthusiastically into his part that you want to commend him.

Say It Isn't So is being sold as "from the guys who brought you There's Something About Mary, but don't be fooled. The Farrelly brothers only produced this mess and the movie doesn't have any of the guilty gut-busters of their previous work. Say It Isn't So has the gross, but not the guffaws.