From the Vault: Richard III 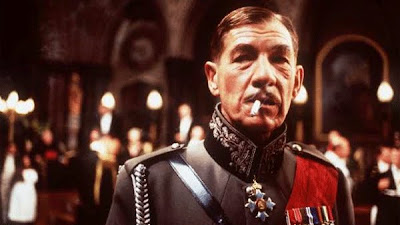 And therefore — since I cannot prove a lover,
To entertain these fair, well-spoken days, —
I am determined to prove a villain,
And hate the idle pleasures of these days.
Richard III, Act I, Scene I

Prove a villain he does in what may be the most imaginative, entertaining film adaptation of a Shakespeare play ever.

Adapted from an acclaimed stage production, Richard III transplants the Bard's historical play from the 15th century to a fictionalized England of the 1930s, where a bloody civil war rages and the pseudo-fascist Richard of Gloucester conspires to seize the throne from himself — at the expense of many family members.

When we first see Richard on screen leading an attack on reigning King Henry and his troops, a gas mask hides his face and causes Richard to breathe heavily and evoke a far more humanistic movie villain — Darth Vader. The allusion to Star Wars ends up being wholly appropriate because this is Shakespeare revised to be a movie, not just a filmed version of the play.

Sir Ian McKellen plays Richard, repeating his stage triumph and showing why he often earns the label of the foremost Shakespearean actor of his generation. This is Shakespeare delivered conversationally with as much respect for the context as the poetry. McKellen doesn't cradle the lines as if he fears they're so delicate that they might break: he charges full throttle and brings Richard to brilliant, rousing life.

An excellent cast supports McKellen, including Annette Bening as Queen Elizabeth, Nigel Hawthorne and John Wood as Richard's brothers Clarence and Edward and Maggie Smith as his mother, the duchess of York.

Lesser known but recognizable performers such as Kristin Scott Thomas as the widowed Lady Anne and Jim Broadbent as Lord Buckingham, Richard's co-conspirator, also add to the fun. The cast's weak spot turns out to be Robert Downey Jr. as Earl Rivers, Elizabeth's brother. Downey's line readings sound so awkward that it comes as a relief when he's dispatched by Richard's henchman (Adrian Dunbar).

Richard Loncraine directs Richard III at a galloping pace and though some purists may dislike cuts in the text, the omissions do not come at the expense of the story's flow, unlike the recent film of Othello.

Too often people of all ages treat Shakespeare as if his plays are museum pieces, treating them more like medicine they have to take than entertainment. With this film, perhaps that view can change as its stunning visuals and realistic action manage to keep reluctant viewers' attention while McKellen's exquisite acting helps the words penetrate their mind.