From the Vault: Reversal of Fortune 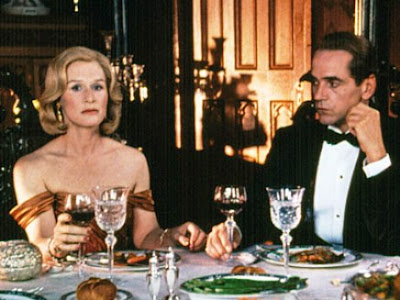 By Edward Copeland
One can only speculate what goes on behind a closed door, one character says in Reversal of Fortune.

The legal process that tries to determine what did happen behind one closed door lies at the heart of this darkly humorous telling of the Claus von Bulow (Jeremy Irons) story.

Sunny von Bulow (Glenn Close) narrates the film from the "persistent vegetative state" she's lived in since the disputed events of the early 1980s that resulted in Claus' trial and his eventual acquittal for her attempted murder.

The film focuses on celebrated attorney Alan Dershowitz (Ron Silver), the man who took on von Bulow's appeal despite his own reservations about the man. As the unconscious Sunny asks, "Is he (Claus) the devil? If so, can the devil get justice?"

At one point in the film, one of Dershowitz's legal team describes a good lawyer as part logician, part psychiatrist and part detective and these aspects all play into making Reversal of Fortune of the year's most enjoyable and compelling films.

Directed by Barbet Schroeder, who made 1987's excellent Barfly, the film marvelously contrasts the glitz of the von Bulows' Newport mansion with the working class background in which Dershowitz was raised but has long since out-earned.

The performances — as well as Nicholas Kazan's adaptation of Dershowitz's book — make this film work. "What does someone have who's afraid of insulin?" Claus asks at one point. "Claus-trophobia."

Dershowitz's legal investigation fascinates as he attempts to break down the case against Claus piece by piece. What's most compelling about Reversal of Fortune is its refusal to judge von Bulow. By the end, the audience doesn't know whether or not von Bulow is "guilty of something," all they know is that he's innocent in the eyes of the law.

Irons' perfect mimicry of the Danish aristocrat is but a small portion of his outstanding performance that infuses Claus with a jet-black sense of humor about his plight. While Close's role is limited, it still registers strongly as one of her best. Silver — who seems to alternate between good and bad performances — lands a good one here.

"Being human is so literal," Sunny says. "Time only moves in one direction — forward. It's stupid and boring."

Reversal of Fortune is neither stupid nor boring and with its Rashomon-like nuances, one shouldn't take its events literally. Instead, they should just enjoy the tale it spins.

Comments:
I have to admit that Sunny Von Bulow crossed my mind from time to time ever since I saw the film, her condition being high on the 'most frightening things that can happen to you' list. The film doesn't judge. I think Claus did it. In another twist of fate, Sunny's money, which was the cause of her coma, only prolonged her agony, as it paid for such excellent care. Without it, she would have died much sooner. I hope she now rests in peace.