From the Vault: Once Around

BLOGGER'S NOTE: Today marks the 20th anniversary of the release of Once Around. This is my original review of the film from 1991. 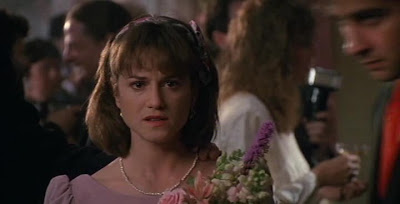 Dogs can't fulfill their dreams so humans have to do it for them. So goes a Lithuanian proverb that Sam Sharpe likes to recite in Once Around, the American film debut of Swedish director Lasse Hallstrom (My Life as a Dog).

Richard Dreyfuss stars as Sam and everyone knows someone like him. He'd do anything for you, but perhaps with ulterior motives. He's as lovable as he is obnoxious and he always has to be "on." He is his own caricature and feels compelled to be the center of attention.

In Hallstrom's film, Sam captures the attention of Renata Belle (Holly Hunter) and tries to woo her family as he has her. Renata meets Sam at a real estate seminar, a new business she's pursuing in hopes of healing from her breakup with her boyfriend Rob (Griffin Dunne in an amusing cameo).

Sam masterminded the condominium ploy, demonstrated in a dead-on parody of those half-hour infomercials that inundate the TV airwaves in the wee hours of the morning.

Don't be confused into thinking that Once Around exists solely as comedy, because it's much more than that. It takes moviegoers on a life-affirming journey through the lives of a family that teeters between reality and fantasy.

Some critics complain that Once Around has an inconsistent tone, that characters — particularly Sam — seem realistic one moment, a broad caricature the next. This isn't a weakness — it's a plus. These dynamic characters, like most real people, seldom stay in the same mood for years. Once Around dares to show these characters in different modes and it deserves applause for that.

Perhaps the strongest kudos deserve to go to Gena Rowlands' underplayed elegance as Marilyn, Joe's wife. A no-nonsense woman, she usually spots a problem quickly and keeps it in perspective. However, she babies Renata, her oldest daughter and at times seems too intent on being seen as perfect.

Malia Scotch Marmo's script consistently rings true with surprises that feel right without being manipulative. It equally balances humor and tension, chaos with calm. Hallstrom keeps the shifting tones of the film moving within the circular motif he follows. Rings and circles and round objects constantly pop up in the visual field and finally it hits home what Once Around aims at being about.

This movie is about change and the life cycle itself. In the end, Once Around presents one of the most moving depictions of this classic subject in a long time.