From the Vault: Mark Hamill 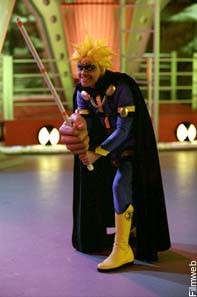 According to writer-director Kevin Smith, Mark Hamill told him the only job offers that excited his children were The Simpsons and Jay and Silent Bob Strike Back. While their father's place in film history was lost on the young Hamills, his work as Luke Skywalker in George Lucas' original Star Wars trilogy still impresses Smith, who manages to make Star Wars references in nearly everything he does.

HAMILL:"There were so many things I didn't get in this movie. I'm so out of the demographic. I just wanted to go see how the young people live."

In Jay and Silent Bob Strike Back, Hamill's casting allowed Smith, who plays Silent Bob, the chance of a lifetime: the opportunity to duel with the Jedi himself.

While Hamill has fielded many offers over the years to toy with his image as Luke, Jay and Silent Bob was the first script where he felt it was OK to tweak Star Wars. Hamill said it was his son, Nathan, who introduced him to Smith's work.

"Years ago, before I saw Clerks properly, ... Nathan came to me and said, 'Dad, you've got to see this — it's so funny.' And he pushes the button and this was throwaway dialogue where this guy goes, 'What do you think on the Death Star? Was that independent contracting or did they do that in-house?'"

Much later, when Smith offered the chance to appear in one of his films, Hamill's decision was easier.

"With this, you can tell from that moment ... in Clerks and then all the way throughout his works, there's a real affection for the material on his part."

Hamill's approval wasn't the only one required: A clause in Hamill's contract requires that Lucasfilm see any script that spoofs Star Wars.

"Lucasfilm had to read the script because I have something in my contract that precludes me from holding (Star Wars) up to ridicule."

After Hamill agreed to take part in Jay and Silent Bob, his lawyer called to ask if had been cleared by Lucas' people.

There was no problem and Hamill appears in Jay and Silent Bob Strike Back, playing a movie villain named Cockknocker.

"I've been asked to do a lot of things, either in cameo situations or whole movies, that are based or derivative from George's movies, and I never really considered it at all. It's easier not to. I know when I heard that Mel Brooks was doing Spaceballs I said, 'If he calls, I love Mel Brooks so much, I know I'll do it.' But he never called. In a way, I was disappointed and relieved."

"(Smith) was one of these guys — I feel this way about Matt Groening, even though I've never meant Matt — where you read an interview and you go, 'Oh my God, it's like my best friend in high school.'"

Hamill's respect for Smith increased once he worked with him. During his scene, Hamill suggested a different way to explain how his character got his name and Smith agreed.

"Even at the 11th hour, he accommodated me, and it winds up in the movie. That really makes you feel empowered."

SMITH: "Mark was really fun and game and brought something to it that wasn't even there on the page because it wasn't written for him. It wound up being Mark and suddenly, it just added another dimension to the fight."

"I'm always surprised and jarred when you're watching something and someone makes a reference (to Star Wars). It's on sitcoms, editorial cartoons, the Evil Empire during the Reagan years. Someone said, 'Does it bother you when people call you Luke?' Not only do they know my name, they know Peter Mayhew played the wookiee. That's really something."

Even though he wasn't involved in Star Wars: Episode I — The Phantom Menace, the hoopla surrounding its 1999 opening amazed Hamill.

"Most of what I loved (about Phantom Menace) was just how much of a cultural event it was. People camped outside the theaters — I loved that. Now, I don't know where they bathed. Can you imagine the stench in a theater with people who'd been camped out for a month? This to me is fun, goofy pop culture at its best."