From the Vault: James Woods 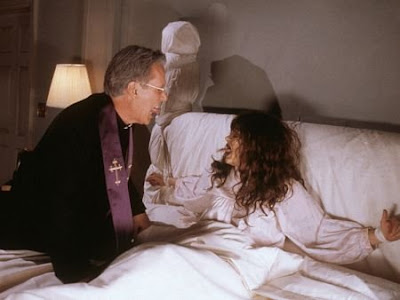 You don't often think of Marlon Brando and James Woods being up for the same part, but that's what happened with Scary Movie 2. Brando had agreed to play a priest in a spoof of The Exorcist that opens the sequel, but a case of pneumonia forced the two-time Oscar winner to bow out. Luckily for the filmmakers, Woods stepped in for the ailing screen legend.

"I was supposed to do On the Waterfront, but I was 9."

Part of The Exorcist spoof had been filmed with Brando, so the production just shut down until his replacement was secured and changes could be made.

"We just shot everything over. It wasn't like we were locked into anything. It was just a completely different experience."

Woods said little was changed in the script, including a bathroom scene highly reminiscent of Dumb and Dumber but funny nonetheless. Still, the filmmakers offered to excise the scene if Woods objected.

"Cut it out? I want you to enlarge it. You read it and it's the funniest thing in the script. You laugh out loud."

While his role in Scary Movie 2 certainly has fun at the expense of the film that inspired it, Woods fondly remembers seeing The Exorcist for the first time when it came out in 1973.

"When you watch The Exorcist what makes it really compelling is the fact that it doesn't have a lot of blood and guts. Eighty percent of the movie is just imagining what horrible thing is there. It's all the imagination that works and very little is left to the imagination these days."

"One of my agents said, 'Remember, you are a very serious actor' and I said, 'Not anymore.'"

After years of being saddled with scripts for edgy villains, Woods welcomed the chance to have some fun.

"The movies, especially the big action movies, are so programmed. Just because of political correctness, the bad guy always has to be the middle-age white guy. To me, it's boring to play the same part again and again, so I stopped doing it years ago. I now look for more unique things to do. People wonder why I'm doing things. I just read them and, if they appeal to me, I do them. I'll turn down millions of dollars not to play some asshole in a suit, because I'm not interested in that."

One opportunity Woods' eclectic career gave him was to work with Jack Lemmon, who died the night before this interview, in the 1976 film Alex and the Gypsy. Woods learned of Lemmon's passing only after seeing a newspaper in the interview room. In Alex and the Gypsy, Woods had the third-billed role, but when the film was released, he got a surprise.

"When the movie was coming out, all of a sudden I had billing over the title. I called my agent and asked, 'How did this happen?' 'Jack thought you were very funny and he asked the producer to give you billing with him and Genevieve (Bujold)' ... He was that kind of guy. (Lemmon) really wanted to share the wealth, as it were. He was a really lovely guy. There was not a thing about him you could say that was anything other than great."

As for Woods, part of him facetiously hopes for negative fallout from Scary Movie 2.

"I'm hoping to end my career with this so I can go back and play some more golf."