From the Vault: Four Rooms 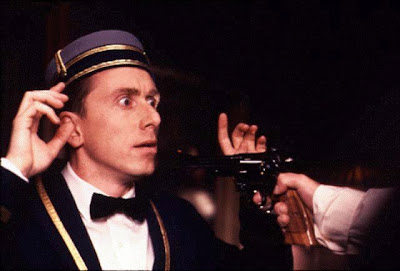 No matter how good the idea looks on paper, the odds seem greatly stacked against feature directors combining their talents on short films around a common location or theme. For every small masterpiece such as Martin Scorsese's "Life Lessons" in New York Stories, you get four works such as the ones found in Four Rooms.

Four Rooms revolves around the misadventures of a bellhop named Ted (Tim Roth) on his first night on the job (and it's New Year's Eve no less) at the Hotel Mon Signor, a Hollywood landmark that once attracted the major stars of the 1930s, 1940s and early 1950s.

Allison Anders (Gas Food Lodging) wrote and directed the first segment, "The Missing Ingredient," which doesn't start things out well since it's the weakest segment. Set in the hotel's honeymoon suite, Anders' effort concerns the gathering of a coven of witches (including Madonna, Lili Taylor and Valeria Golino) who try to summon a long dead virgin goddess. Unlike the goddess, this segment never comes to life.

Things improve slightly in the second short, "The Wrong Man," which tells what happens when Ted wanders into the wrong room and becomes embroiled in a domestic dispute between a married couple (David Proval, Jennifer Beals). While this segment written and directed by Alexander Rockwell doesn't succeed either, Proval provides some good moments and Rockwell does manage to build some suspense (even though we know Ted has to be OK since there are two more rooms to go).

Writer-director Robert Rodriguez contributes the most enjoyable section with "The Misbehavers" which features a great comic performance by Antonio Banderas who leaves his two rambunctious children in the poor bellhop's care while he and his wife hit the town. "The Misbehavers" contains the most chuckles of any part of the film and has been so well conceived that it makes the two previous shorts look even weaker.

The final segment, "The Man From Hollywood," offers the first writing-directing effort from Quentin Tarantino since his masterful Pulp Fiction. Taking its basic premise from the classic "Man From Rio" episode of Alfred Hitchcock Presents, it works best when Tarantino's character (a successful Hollywood filmmaker) deconstructs himself to often funny effect.