From the Vault: Dead Presidents 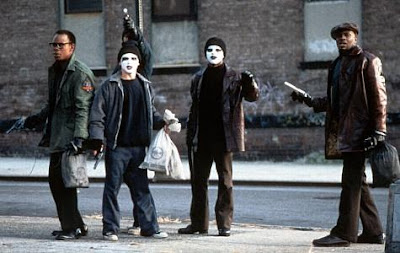 The sophomore slump strikes the Hughes brothers, whose follow-up to the great Menace II Society turns out to be a dud.

Dead Presidents, the twentysomething twins' second film, displays much of the style that earned them acclaim for their debut, but the movie this time gets hampered by its linear storytelling.

Larenz Tate, who made an electrifying debut in Menace as the murderous O-Dog, stars as Anthony Curtis, a young Brooklyn man who enlists in the Marines in 1968 following high school but finds no welcome once he returns from Vietnam four years later.

The film follows such a standard path that it ruins its rich subject matter, especially when desperation leads Anthony and his friends toward planning an armored car heist. Dead Presidents turns into one of those films that makes you want to run into an editing room immediately after seeing it in hopes that it can still be saved. A good place to start would be to make the structure less chronological. It robs the film of its kinetic energy and the movie stalls.

Keith David gives the film's best performance as Kirby, a wounded Korean War vet and mentor of sorts to Anthony. Kirby runs a numbers game and later joins in on the heist plot. The film wastes the opportunity to show Kirby's tale as well, explaining how he evolved from war hero to criminal from an entirely different conflict and how history repeats itself with Anthony.

Dead Presidents also finds itself undermined by too many familiar elements such as the crazy soldier (Bokeem Woodbine) who follows what should be a surprising path, but isn't thanks to countless other movies.

The film also contains some of the most gruesome war scenes I've ever seen.

Dead Presidents certainly produces some memorable moments, but the overall tedium makes it a disappointment. Let's hope the Hughes brothers have better luck next time.