From the Vault: Menace II Society 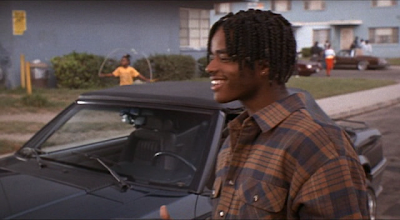 No recent film has deserved as much praise while simultaneously proving as difficult to recommend than Menace II Society. The first film by 21-year-old twins Albert and Allen Hughes, who directed and conceived the screenplay with Tyger Williams, provides yet another stunningly assured debut by the growing crop of young filmmakers.

Menace II Society takes a grim and somewhat depressing look at urban life in Los Angeles, never shying away from showing the brutality of 1993 Watts. The viewer may feel compelled to look away, but its artistry and shocking candor keeps eyes glued to the screen.

The film tells the story of Caine (Tyrin Turner), a recent high school grad who learned to survive on the streets after the deaths of both parents. He deals drugs and commits many crimes.

To its credit, the film doesn't portray Caine as a villain or a sympathetic victim of circumstance -- he's just a product of his environs.

The film probably will draw comparisons to John Singleton's excellent 1991 film Boyz N the Hood, but Menace II Society doesn't even offer the smallest dashes of hope that Boyz did and it avoids the melodramatic tendencies that hampered Singleton's film.

Menace II Society, for me at least, more closely resembles Henry: Portrait of a Serial Killer with its unflinching portrait of a madman.

Both films are compelling and unpleasant and by the end of each, the audience longs for better lives for their protagonists, despite their heinous crimes. Toward the end of Menace II Society, when Caine lashes out at a drunken friend, you're relieved he only uses the butt of a gun instead of its bullets.

Luckily, like Henry, this film doesn't let the audience off the hook with the happy endings to which they've become accustomed. Instead, the Hughes brothers' strict adherence to their vision produces one of the most powerful films in recent memory. No other recent film has made me feel sadder or more helpless.

Those brave enough to sit through this film will not only be rewarded with a great movie but will probably ponder Menace II Society for a long time. Given the subject matter, anything that spurs discussion and contemplation of the difficult issues it raises deserves accolades.