From the Vault: Christina Ricci 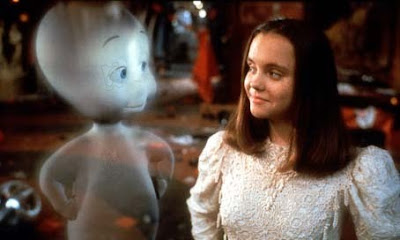 ORIGINALLY PUBLISHED MAY 26, 1995
When Casper director Brad Silberling tried to make a cultural reference to illustrate a point to his star, Christina Ricci, the actress had to remind him that she "was born in 1980." Meeting Ricci in person and observing her words and demeanor certainly belie the fact that she's merely 15 years old.

Ricci first gained notice as Cher's youngest daughter and Winona Ryder's little sister in 1990's Mermaids before making an even more vivid impression as Wednesday in the two Addams Family movies. The young actress has been projecting the image of someone much wiser than her years since those two films, but she says she doesn't get annoyed by being told that repeatedly.

"People tell me that. I don't see how I could get tired of that. People don't really realize that most teenagers aren't little kids. Most kids, if you really sit down and talk with them, they're not stupid, they're not infantile. I don't really think I'm an exception."

Still, her constant references to being "cynical" and her admission that she is reading Kurt Vonnegut's Cat's Cradle as well as the 3,000-page classic Clarissa by Samuel Richardson primarily because it is so lengthy (her argument being that if you get involved in a really good book, you want it to go on forever), make it clear that she isn't just your average teen. She also has distinct likes and dislikes that may seem more likely to come from the mouths of adults.

"Of course, I guess everyone says it now, but I guess I have to be trendy and say it too but I really do love Quentin Tarantino. I saw Pulp Fiction like six times and I loved it."

However, the young woman doesn't mince words about what's not cool either.

"I probably am going to get into big trouble for saying this, but I think True Lies is not cool. I found it the most uncomfortable movie to watch, being a woman, sitting in the theater. It was such a hostile movie toward women and toward Middle-Eastern people. ... I think the way they humiliated Jamie Lee Curtis' character was disgusting."

The teenage star admits to missing out on some childhood experiences since she began performing at 8, but has no regrets.

"I definitely have missed out on some things, but if I had to do it again I would happily sacrifice for the other things I've gotten to experience."

These other things include the fact that most 15-year-olds aren't starring in a Steven Spielberg-produced special effects-laden motion picture event such as Casper, a live-action updating of the classic character of the friendly ghost. Ricci originally met Spielberg when she auditioned for Jurassic Park. She didn't get that part, but Spielberg called her back for Casper. Meeting the young yet legendary filmmaker was quite an event in Ricci's life.

"When I met him, it was just incredible. It was like going in and meeting a superhuman."

The dream of bringing Casper to movie life began with Spielberg, who served as executive producer on the project. Given her age, Ricci wasn't familiar with either Casper's cartoon or comic book origins and she made no attempt to seek them out.

"It's a different story, basically. I mean, he's the same character, but what else is the same?" Ricci asked. Ricci also had some reservations about the project itself.

"When I first heard about it, I was afraid of it being real cheesy... but the script was totally not what I expected. (It was) really sarcastic and cynical and had this really cool edge."

Ricci says she is somewhat pleased with the finished product, though she admits she isn't easy on her own work.

"It's really hard for me to judge because — and I'm sure most people do this, but it sounds totally egotistical — but I spent the whole movie really focused on myself, which I guess is natural. I usually don't like my own stuff, but I liked it. I thought it was pretty good and really funny and kind of touching. My mom cried, so I guess that's a good sign."

She also thinks that Casper will appeal beyond just young kids.

"I think it appeals to a wide variety of people. Baby boomers will appreciate it because it is Casper, which they grew up with, and little kids will love it because Casper appeals to little kids — it's ghosts, these spectacular effects and I think people my age will like it because of the effects and because of how revolutionary all the stuff is. I think that will be a big draw — to see the visual effects of it."

As for the future, the beginning of summer is making Ricci as antsy as a workaholic businessperson.

"I want a job. I haven't been working for four months and I'm going crazy. I need to work."

Her future projects include The Gaslight Addition, in which she plays a character who grows up to be played by Rosie O'Donnell. The film also stars Melanie Griffith. However, Ricci has no desire to return to Wednesday in another Addams Family film since the death of Raul Julia, who played her father Gomez in the movie.

"It's incredible. We don't realize how much we have, until we lose it. He was such a talent, such an asset. I think the more wonderful people we have in Hollywood, the better that work is going to be just from their presence."