From the Vault: Career Opportunities 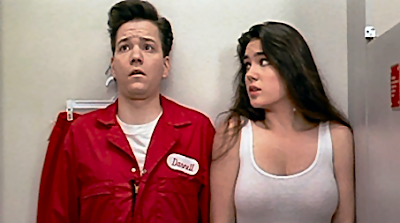 Welcome to the John Hughes Do-It-Yourself Screenplay Kit.
FADE IN: Chicago suburb.
(Pick one of the following)
A

The next step is more difficult. Choose whether or not to make this movie about:


Frank Whaley stars as Ferris — I mean Jim Dodge, a 21-year-old who can't hold a job. After being fired for the umpteenth time, Dodge gets a job as night cleanup guy at Target, which gets a 90-minute commercial.

Meanwhile, Jennifer Connelly plays the 21-year-old daughter of the richest man in town and tries to embarrass him any time she can. Her latest attempt involves shoplifting, but she chickens out and hides in the Target dressing room. As she hides and Jim prepares to clean, Jim's psycho supervisor (William Forsythe) locks him in all night.

Jim stumbles upon the young woman and the two engage in Breakfast Club-type truth games followed by the requisite pop drivel-driven dance of discovery. Yes, though Hughes only wrote the script and left Bryan Gordon to direct, it still contains his overused music video sequences. Total for this film: six.

Following the truth game, guess who happens to wander into the store? Why — it's two bumbling burglars! Other traditional Hughesian elements include Jim's family, made up of two sitcom-quality kids (brainy sister, precocious younger brother) and parents (hard-ass dad, optimistic mom) and, of course, a cameo by John Candy.

Gordon shot the film in widescreen, though I don't know why, unless it's for those panoramic shots of the Target store's empty parking lot. David Lean would be proud.

Perhaps all these familiar elements would be forgivable if the film were funny, but it's not. The audience I saw the film with, about 30 people of varying ages, I only heard someone laugh out loud once.

In addition to the Hughes-built cliches, the films ends abruptly and includes inexplicable shots of Jim's dad late-night eating binge. Hughes must be stopped. He can't keep using the same plots over and over again.

His films, even the ones people like the first time, grind on later viewings. His only truly worthwhile effort was Sixteen Candles, but I challenge anyone who liked The Breakfast Club as a teen to be able to endure it now, its noble sentiments killed by an unrealistic ending and the bluster of the ever-annoying Judd Nelson. Watch it now and you'll side with Paul Gleason.

People still flock to these monuments of self-plagiarism. I guess that years of Three's Company, Who's the Boss? and America's Funniest Home Sado-Masochists have shortened the public attention span to the point that they suffer from cinematic amnesia.

So, bumbling burglars are in now and Hughes is certain to use them a lot. Career Opportunities is just as lame as the other recycled Hughes products, but it's even less entertaining than most.