From the Vault: Andrew Adamson and Vicky Jenson 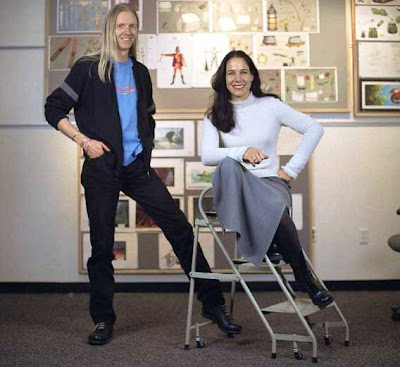 "Whereas on a live-action set, you get all your actors and gaffers and the camera crew and everyone shows up on the set on the same day and you shoot a scene, in an animated movie you might record one of the actors one day, another actor a couple months later. So what took a day on a live-action set ended up being spread out over a year. Many of the same tasks, just separated and slowed down."

Shrek, based on the children's book by William Steig, tells the story of an angry ogre who finds his solitary life disrupted when evil Lord Farquaad banishes all "fairy tale creatures" out of his kingdom and into Shrek's swamp. Hoping to get rid of the squatters, Shrek makes a deal with Farquaad to rescue Princess Fiona so Farquaad can marry her.

Like the Toy Story movies, Shrek is an example of state-of-the-art computer animation. Using tools called "shapers," Shrek advances the art by creating characters that can express dialogue and emotion through a complex facial animation system developed by PDI/DreamWorks. To achieve the expressive looks, the system applies layers of bone, muscle, fat, etc., that can be manipulated separately. The technique also allows for more realistic depiction of clothing and environment. Having co-directors, in this case Adamson and Vicky Jenson, helped move the process along faster.

JENSON: "What we tend to do with an animated feature is kind of break the movie down into separate scenes or sequences and kind of tackle those one at a time in story. What we did was kind of divide up those sequences, kind of like trading cards."

That approach also gave Adamson and Jenson someone who could help out if either hit a bump in the road.

JENSON: "We were both very involved with each other's sequences. If one of us ran into a creative block in editorial ... then we were there for each other."

Perhaps the biggest problem the production encountered was the death of Chris Farley, who had recorded some dialogue as the title character before he died. Farley's former Saturday Night Live co-star Mike Myers stepped in and the film had to start over, almost from scratch. Because of the conflicting schedules of the voice talents, Myers, Eddie Murphy, Cameron Diaz, John Lithgow and others sometimes would record their work up to a year apart.

Both directors laud their cast's willingness to record many versions of their lines to allow for more options in editing. Fortunately for the filmmakers, improvisation is second nature for Myers and Murphy, which made the film's gentle ribbing of fairy tale conventions all the more fun.

"I'm just rehearsing lush, tropical locations where a weary director and her husband can go and relax for a while."