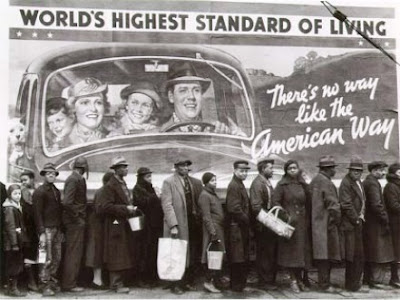 By Eddie Selover
Think these are hard times? Try 1932.

It was the worst year of the Great Depression. The economy had already been in free-fall for three years. The latest in a series of oblivious and inept Republican presidents had helped further deregulate markets, which had then spun out of control. Since the crash, Herbert Hoover had been preaching the standard Republican doctrine: self reliance and charitable giving. The tent cities that sprang up all over America to house the legions of newly homeless were named in his honor: Hoovervilles. In June of 1932, when veterans of the previous World War marched on Washington demanding payment of their bonuses, Hoover’s Administration met them with tear gas and bayonets. By the end of the year, 40% of U.S. banks had failed. Drought decimated the Midwest, turning farmland into the “Dust Bowl,” and food was scarce. Some farmers burned their crops for heat, as the coldest winter in history — and a mood of real despair — settled over the country.

Only one thing got better in 1932, and that was the movies. The coming of sound five years earlier had brought a number of technical problems, but these had finally been ironed out. There’s an enormous difference between movies made in 1931 and 1932. The former are static and stiff, with performers who stand and declaim their mostly gawdawful dialogue to the back of the theater. But the movies of 1932 began to move again, with the camera venturing outdoors, the film stock brighter and more textured, and the performers lighter on their feet and acting for the camera instead of imitating stage technique. Movie attendance was down, and so the studios took advantage of the unenforced censorship Code of the time and lured patrons back with sex and violence, to a degree that’s still startling today. And with the economy so bad and life so hard, the movies began to reflect the tough, cynical outlook that was in the air.

Among a bunch of terrific pictures made in 1932, two especially stand out. The first, One Way Passage, is a perfect little daydream of a movie, with the absurd gallantry of the characters nicely set off by the crude pre-Code realism of the settings and details. The other, Two Seconds, is pure Depression-era nightmare. 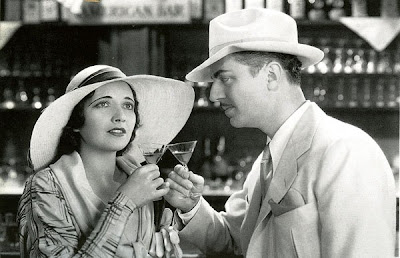 One Way Passage begins in a Singapore gin joint. To an American audience in its 12th year of Prohibition, the daydream had already begun right there. A bartender is talking to an unseen customer while making a Paradise Cocktail and lovingly describing each step. By the time he makes a flourish out of twisting a lemon rind over the top, you want it as badly as the customer. He turns out to be exactly the actor you’d expect to see at a bar in the 30s — William Powell. The epitome of suavity and sophistication, and that rarest of things: a grown up. He holds the glass out to savor the cocktail and leans in for his first sip, only to be jostled from behind and have most of it slosh out. Turning to curse out the jostler, he finds that it’s a beautiful girl. She’s Kay Francis, an ineffable, strange actress known mostly for being a clotheshorse and for her inability to pronounce the letters R and L. It’s love at first sight, maybe helped by the fact that this was Francis and Powell’s fifth movie together. She smiles brightly and then sees what she’s done.

"Always the most pwecious, the wast dwops," she comments breathlessly. It’s not just positive thinking. She is, you see, dying of an unnamed but incurable disease. Her doctor has ordered complete rest, but she’s determined to live life to the fullest before she goes. What she doesn’t know, but we soon find out, is that Powell is doomed also. He’s a convicted killer who was sentenced to death in the States and has (as they said back then) taken it on the lam. He can’t stay and chat up Francis, so they drink to their mutual health and then break their glasses on the edge of the bar and lay the stems over each other in honor of their brief meeting. Powell hustles out of the bar, but not fast enough. He’s immediately arrested. A San Francisco cop has been hot on his trail, and plans to take him back to face his fate in the electric chair. His consolation is that he and Francis are on the same boat.

And so romance blossoms, with each aware that doom is around the corner, but neither telling the other. The very real doom that threatened the audience in 1932 is refracted and stylized, but still hangs over the movie and gives it a bitter edge. And the silly old-movie tropes, like the love theme that plays each time Powell and Francis meet, and their ritual of breaking their glasses, pay off beautifully in the final scene. Like the first scene, it’s set at a bar—the movie comes full circle. It’s ridiculous and yet it’s powerfully, hauntingly romantic. You laugh at yourself, but you choke up anyway.

In fact the whole movie is corny as hell, yet it never comes off that way. The actors defuse the sentimentality of the material by underplaying it and playing against it. This includes the supporting cast. Warren Hymer and Frank McHugh, usually quite unendurable little toads, have the good luck to share their scenes with the serenely grounded and generous Aline MacMahon, whose sure touch turns them both into princes. The three of them play, respectively, the arresting cop, a drunken thief, and a phony countess who get involved with the lovers and turn out to be their guardian angels. What’s so wonderful about One Way Passage is the balance between the frankly silly fairy-tale plot and the toughness of the characters. Life has battered these people, and their futures are grim. They respond, ultimately, with integrity and generosity. It’s a beautiful vision of Americans: back them against the wall, and they reveal their best selves.

Or… not. In Two Seconds, the hardship of the Depression doesn't bring out the nobility of the characters. It brings out fear, greed, lust, despair, and ultimately madness. Two Seconds also features a hero who’s on his way to the Chair — John Allen. A crowd of reporters and jail officials has gathered to watch the execution, and one of them comments that after they flip the switch, Allen will have two seconds of consciousness left. Gosh, says one, in those two seconds he’ll remember everything about what brought him to this moment. They flip the switch. And the rest of the movie is those two seconds. 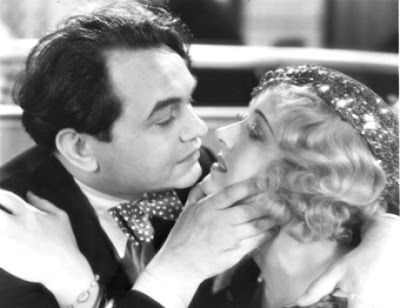 The hum of the electric chair blends into the noise of a riveter. Two men are standing on the girders of an unfinished skyscraper. It’s John and his best friend Bud, played by Edward G. Robinson and Preston Foster. They’re a couple of young guys who are making good money in the Depression, but only because they’re doing this frightening and dangerous work. Bud is a hedonist who blows the money on gambling and women, but John is an idealist. He has big dreams for himself, and he’s picky about women. The truth is he’s the runt who gets stuck with his studly friend’s castoffs, and as the movie proceeds like dirty water swirling down a drain, his aspirations and airs of superiority get thrown back in his face in breathtakingly and increasingly cruel ways.

At first, Preston Foster is slightly hard to take as Bud. He had recently played the role on stage, and he’s still a bit “big” for the movie. I always thought Foster was a lousy actor until I found out that he was also a guitarist and composer; he wrote the Muddy Waters classic “Got My Mojo Working,” which makes him a hero in my book. Essentially he was a proto-beatnik, and maybe too hip to take seriously the cardboard roles that usually came his way. Despite his overemphasis, he’s intensely likeable as Bud. His love for John is the motor of the movie and one of its few grace notes.

The other grace note is Edward G. Robinson. You wouldn’t think he could play John Allen, who is a muscular, working class, somewhat stupid young guy who gets in way over his head. But Robinson was one of the most skillful of all performers, and he does much more than play the character. He takes you on a journey. I can’t improve on Mick LaSalle’s description, in his book Dangerous Men, of Robinson’s final speech as he’s being sentenced to die. “This is Robinson, great American actor, in the most intense minutes of his film career. He endows the speech with the shape and size of melodrama but maintains the precision of a ballet dancer. Remaining true to his core and so in control, he goes to a deep place, without fear, hesitation, or bluffing, using himself unflinchingly. No movie star ever looked like Robinson, and he’s beautiful.”

I don’t want to say any more about the plot. We know from the beginning that Robinson is going to fry. The drama is seeing the steps by which his ordinary life, and ultimately his mind, comes completely unraveled. As with One Way Passage, the sense of fate closing like a trap is clearly a metaphor for the Depression, and the feeling that ordinary hard times were deepening into something more existentially threatening and terrifying. The movie itself changes from stark realism to near-abstract expressionism. And the ending hits you with the force of a brick hurled in your face. This nightmare offers no salvation, except the sweetness and humanity of Robinson’s art. That’s more than enough.

Two Seconds is available from Warner Home Video’s Archives Collection. One Way Passage crops up on TCM every so often. Each lasts about an hour, and each packs more story, more honesty, and more maturity into that hour than 90% of the movies being made today. Maybe hard times were good for something.

Comments:
I've never seen Two Seconds, but I love Robinson, but One Way Passage is fun.

One Way Passage made an unheralded appearance in the Warner Archive Collection late this year... sad that this great movie is so obsure. If there was any justice in the world, it would be on the front shelf at your local Best Buy.

Hello everyone, I hope I'm not violating any rules by posting this comment. Here goes. ONE WAY PASSAGE was directed by my father, Tay Garnett. Now I'm on a mission to put his wonderful memoir back in print. (My father died in 1977.) The sections about ONE WAY PASSAGE, how it almost didn't happen (and how Dad should have won an Oscar for Original Story) are in that book. You can find more info on what I'm doing to get it back in print, as well as a gallery of old photos from Dad's career, at www.lightyourtorches.com
Again, if I'm violating any rules by posting this, I'll delete immediately. Best, and many thanks.