The adults — not so much 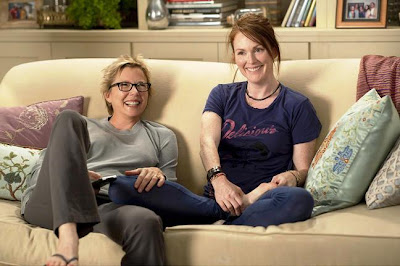 By Edward Copeland
Back in 1998, writer-director Lisa Cholodenko made the overrated High Art with the extremely overpraised performance of Ally Sheedy that was lauded as some sort of comeback for the actress. Mostly, she's concentrated on television work though in 2002 she did make another cinematic mess which at least had a good performance from Frances McDormand, even if McDormand's character defied logic at times.

She's back on the big screen again this year with what is, admittedly, her best feature yet in The Kids Are All Right but it's a case of a talented cast pulling her predictable script and sluggish direction out of the fire and earning the film praise it otherwise wouldn't get.

Annette Bening and Julianne Moore star as Nic and Jules, a longtime lesbian couple with two teenage children, each the product of the same anonymous sperm donor. Nic has been the breadwinner of the family as a successful physician while Jules has floundered in various attempts at jobs and businesses. When Joni (Mia Wasikowska), the daughter Nic gave birth to, turns 18, her half-brother Laser (Josh Hutcherson) gets her to track down their natural father.

The donor turns out to be Paul (Mark Ruffalo), a laid-back, scruffy-looking restaurateur whose eatery's food is supplied by the rather large organic garden he tends himself behind his home. Even though Laser initially sought the meeting, Joni turns out to be the one who likes Paul more after their first encounter.

Of course, Nic and Jules find themselves just as curious about the father of their children as the children were, so they invite Paul for dinner. While it goes fine, Nic, as seems to be her nature, stays in hypercritical mode and skeptical of everything he says. Jules, on the other hand, who has just started trying to launch a landscape design business relishes the opportunity when Paul asks her to help him get a handle on his unruly garden.

You would have to have never seen a film before not to guess where this is heading, with a plot twist as inevitable, uninspired and predictable as when there is a plot about a Catholic priest involved in some close way with a woman: you know that celibacy vow is going to break before the film is over.

What really puzzles me, not so much about its classification by the waiters and florists at the Hollywood Foreign Press Association but by all the reviews that have come before, is the insistence on calling it a comedy. There are some laughs, but not a lot of them. Maybe the correct term should be bad comedy.

Based on Cholodenko'a previous films, she hasn't shown much evidence of having a sense of humor. The Kids Are All Right does have a co-writer, Stuart Blumberg, who wrote the great underrated comedy Keeping the Faith, so I know he has the ability to make me laugh.

Still, as I said before, The Kids Are All Right is a huge improvement over Cholodenko's previous features, even if I didn't think the film itself succeeds, and that's because of its cast.

Bening's Nic is one of her best creations. Devoid of makeup and any glamour, she's mostly a sourpuss, but not in the grating way her character in American Beauty came off. It's really unlike any role Bening has played before and she's great in it.

Moore's earth-mothery Jules resembles characters she has played in the past, but she does those roles damn well. However, the similarities to her other parts, just add lesbianism, may be why Bening has been scooping up most of the kudos for the film.

Ruffalo's Paul also reminded me of characters from his past except that he's not a loser. He's a success businesswise with the attitude of some of his previous roles such as You Can Count on Me or a younger version of the part he played on stage in Kenneth Lonergan's This Is Our Youth.

Bening, Moore and Ruffalo turning in strong performances isn't really a surprise, but what really props up the weak structure of The Kids Are All Right are the kids themselves.

Wasikowska, who was Alice in Tim Burton's Alice in Wonderland, works wonders as Joni, the 18-year-old itching to go to college and get out of a household she's begun to find suffocating.

Hutcherson gives an even better performance as Laser, the 15-year-old son of Jules whose short attention span wouldn't be uncommon for someone his age but perfectly complements someone who is supposed to be the product of Ruffalo and Moore's characters. He makes the most convincing case that the film might be a comedy because he certainly seems to get the best lines and funniest moments. I'll be curious to see where Hutcherson's career goes from here.

If for the performances alone, I can't say I regret seeing The Kids Are All Right, but it's not something I'd want to see a second time and, with a weaker cast, I think most of the praise it has received would evaporate rather quickly.

Comments:
Hmm, this was my second favorite movie of 2010 so far (after Winter's Bone). Sure, the infidelity is "predictable" but nearly all plots are. What matters is the execution, and the film doesn't pull any punches in its depiction of the emotional pain and fallout of a bad decision. The characters are flawed and relatable -- their motivations always make sense, even when they do the wrong thing. I thought it was a very mature exploration of various problems that can arise in a relationship when two people have different personalities.

Trying to say predictability is not a problem seems as if you are making excuses for a troubled child. Compare it to Winter's Bone, which I also loved, but you never knew where that was headed and thar's part of what makes it an infinitely superior movie to The Kids Are All Right. As I said, only the talent of the cast keep the weaknesses of the writing and directing from being even more apparent.

Generally speaking, predictability doesn't bother me if something is done well - I mean, I knew nothing about the real-life events that served as the inspiration for The Social Network, but figured out after the opening scene that Mr. Facebook was going to screw everybody over and wind up alone. While I agree it's been somewhat overpraised, I liked The Kids are All Right much better than you did, and though certain elements could be classified as predictable, as a whole I thought it managed to avoid seeming cookie-cutter. The earth didn't move while I watching it (as it seems to have done for a great many film critics), but nonetheless it's a pretty solid effort from Cholodenko, with fine performances across the boards, and there were parts of the writing that I loved...Bening's "If I hear one more person say they love heirloom tomatoes" speech chief among those.