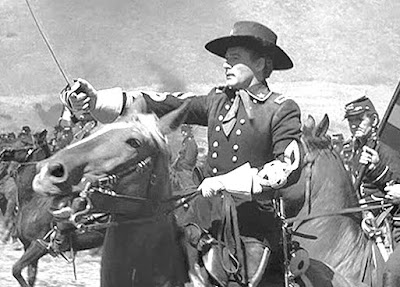 By Eddie Selover
They Died With Their Boots On, which premiered 70 years ago today, is the eighth and final pairing of Errol Flynn and Olivia de Havilland. It's not as famous as some of the others — for example, the pirate swashbuckler Captain Blood or the bejeweled Technicolor storybook Adventures of Robin Hood — but it deserves to be. Those are happy, exuberant movies; this is a tragedy of slowly unfolding power that leaves you unsettled and upset. It's the rare adventure movie that gets under your skin; it achieves its epic qualities through emotion rather than action. The movie is based on the story of George Armstrong Custer, the general whose command of 500 cavalrymen was overwhelmed by ten times as many Native Americans in 1876. Never were the words "based on" more of a euphemism. As history, Boots On bears only a passing resemblance to actual events — in fact the more you know about Custer, the more outrageous the film's portrait becomes. Virtually every event is twisted almost 180 degrees in order to turn a vainglorious and highly flawed man into a noble figure.

Yet even as the film moves toward its barroom-painting view of Custer and his men staging their heroic last stand surrounded by savages, it has to explain how he got there. It does so by setting him up as vain, callow, physically daring but reckless and prone to troublemaking. Cleverly, the filmmakers play the first half of the movie as a light comedy, in which Custer gets himself into one mess after another and strikes ludicrous poses trying to act like a bigger man than he is. We see him making mistakes and extricating himself through charm and luck; instinctively we know it's only a matter of time before that luck runs out. 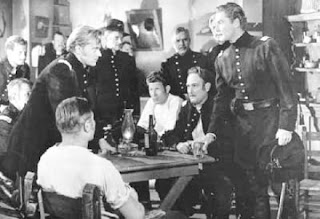 The fact that the same thing was true of Flynn in real life gives the movie an unusual resonance. He was at least as vain as Custer, and easily as reckless; his road to fame and success was just as fast and fortunate, and left him just as unprepared to deal with real challenges. During the making of this movie, Flynn had a couple of underage girls on his yacht, an escapade that led to a long and embarrassing trial for statutory rape that turned him into a public joke after the premiere — particularly after it was revealed in court that Flynn made love with his socks on. His pre-movie life of adventure had left him with an assortment of

chronic maladies that resulted in his being declared 4-F and ineligible for the draft. Because Warner Bros. hushed this up, the public thought him a slacker for not serving in World War II as other stars did. Personal and professional disasters came faster and faster, and his drinking and drug use kept pace. Eventually booze, narcotics and dissipation made him a puffy, slurring, dead-eyed zombie before they finally killed him at the age of 50. Some presentiment of this terrible fate seems to hang over Flynn throughout Boots On. He gives one of his most sensitive and aware performances. His eyes often look wide with fright and he seems more attuned to other actors than usual. Often he pauses and hesitates before taking action, as if genuinely unsure of himself, and when he does act, it's always a shade too swiftly. He's as dashing as ever, but often he dashes right into a brick wall. Some of the credit for this must go to the great Raoul Walsh, here directing Flynn for the first time, after the actor had quarreled with his usual director, Michael Curtiz (the fact that the much-younger Flynn was married to Curtiz's ex-wife Lili Damita is strangely never mentioned in accounts of the poisonously bad relationship between the two men). Curtiz had directed Flynn like a toy action figure, throwing him into the middle of clanging swords and galloping horses and trusting him to sail above it all. Walsh's action scenes were rougher than Curtiz's, less choreographed and clever, and always suggestive of real threat — as you might expect of a man who had lost an eye in an accident.

At this point in her career, de Havilland had developed some serious ambitions and no longer wanted to be the clinging heroine of Flynn's boys-own-adventure movies. She only made the film at Flynn's express request, after they had cleared the air of several years of misunderstanding. By all accounts, including hers, they were seriously in love, but their relationship was undermined continually by his 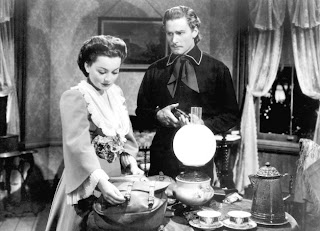 immaturity and instability. Boots On is the only one of their films in which their characters have a real arc, moving from youthful high spirits into a serious relationship, into marriage and ultimately the tragedy of his death. To sweeten the deal for de Havilland, the producer Hal Wallis brought in the fine screenwriter Lenore Coffee for rewrites that rounded out the character of Libby Custer and made her a flesh-and-blood woman rather than a cardboard cutout. De Havilland responds with one of her best and most consistent performances.

In their final scene, she helps him prepare for the battle of Little Big Horn. Both know he's not coming back, and they can barely look at each other while mouthing cheery sentiments they clearly don't believe for a second. They're almost getting away with it when he finds her diary and begins reading it aloud. In it, she confesses her terror over unshakable premonitions of his death. I must have written that every time you left for battle, she says. "Of course," he murmurs softly. They say their goodbyes and he leaves; she's rigid against a wall for support. The camera pulls in suddenly on her and she faints from the accumulated tension. Fainting in movies usually is phony as hell, but this time we've been holding our breaths too, and it feels like a natural reaction. In real life, de Havilland knew she'd never work with Flynn again, and she felt that he knew it as well. The scene is almost unbearable in its poignancy, for both the characters and the actors. Such is its enduring power that at a screening 40 years later, de Havilland, then about 65, walked out in the middle of it. She went to the lobby, sat down and began to cry.