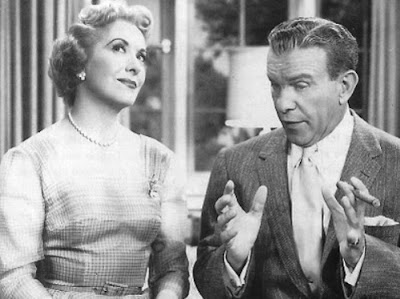 By Ivan G. Shreve, Jr.
Even those individuals who’ve never experienced the delight of listening to or seeing the immortal Jack Benny are familiar with his name — the comedian’s celebrity flame continues to burn bright some 35 years after his passing, and the reason for this is probably due to the fact that he was a fixture on television from 1950 to 1965 (with several TV ‘specials” telecast after that) even though his reign on radio lasted longer. His contemporary, Fred Allen, wasn’t quite as lucky — ill health kept Allen from gaining a toe hold in the visual medium, and so outside of a an old-time radio buff or two, his name just isn’t an instantly recognizable as his one-time "feuding partner."

The comedy team of George Burns and Gracie Allen are remembered today for primarily the same reason — radio may have brought them their greatest fame, but 60 years ago on this date we were asked to spend the first of many television visits with the Burnses. The George Burns and Gracie Allen Show would be a fixture on CBS for eight seasons; a remarkable achievement for a duo who didn’t necessarily do funny things…but said them.

When radio was first in its infancy, you’d be hard-pressed to find anyone famous who’d have anything to do with the new medium — vaudeville was still the main attraction for future radio stars like George and Gracie, in addition to the aforementioned Mr. Benny and Mr. Allen. Occasionally, a star of the magnitude of Will Rogers or Ed Wynn or Eddie Cantor might agree to a guest appearance…but as far as radio was concerned, it was strictly amateur night when it came to the content of its entertainment. (Later, as radio gained prominence in the 1930s, all three men would approach the aural medium with ferocity; as Rogers himself was once quoted as saying: “Radio is too big a thing to be out of.”)

Burns and Allen had become popular vaudeville headliners on the success of their “double act,” which consisted of straight-man George asking girlfriend Gracie questions and getting patently screwball answers, or what Burns dubbed “illogical logic.” But the husband-and-wife team (though they wouldn’t acknowledge being married on the air until the 1940s) were actually among the first big radio stars…though not necessarily in this country. On a vaudeville tour of the United Kingdom in 1929, the duo were so beloved by the British that they made a series of appearances over the BBC, doing routines from the various venues at which they were booked, and though George and Gracie were turned away by NBC the following year (an agency executive for Grape Nuts thought Ms. Allen’s voice was “too squeaky”) they finally landed a radio gig in February 1932 with The Robert Burns Panatella Program (hosted by New Year’s Ever perennial Guy Lombardo) on CBS.

In their radio salad days, Burns and Allen basically soldiered on with the act that had made them famous on stage and in films — with Gracie the “Dumb Dora” character and George the boyfriend constantly driven to distraction by his “girlfriend’s” antics. But because their ratings had begun to take a spectacular dip around the early 1940s, Burns and his writers revamped the show into a domestic situation comedy, with the couple playing a slightly exaggerated version of themselves as husband and wife living in Beverly Hills. Burns and Allen bounced around between CBS and NBC during the 1940s, with their greatest radio success occurring between 1945 and 1949 as the stars of Maxwell House Coffee Time. In the fall of 1949, the duo had been lured back to their original network as a result of CBS chairman William S. Paley’s “talent raids,” and from that point on, the Tiffany network would remain their permanent home, particularly with their decision to abandon their radio program in favor of that newfangled fad called television.

Much has been said of Paley’s celebrated luring of NBC stars to CBS in the late 1940s — many media historians have dubbed him a “visionary” in that he was able to establish the network as a leader in television early on because of stars like Benny, Red Skelton and Freeman Gosden & Charles Correll (Amos ‘n’ Andy). The truth is, Paley honestly wasn’t looking toward the future — he simply wanted to shore up the network’s radio ratings, and found a novel way to do it in stealing his competitor’s thunder. But the unintended consequence of being able to draw upon that talent — not to mention the services of stars such as Lucille Ball (whose My Favorite Husband would be transformed into I Love Lucy), Eve Arden (Our Miss Brooks) and Marie Wilson (My Friend Irma) — put the network in good stead when competing with NBC, who had luminaries such as Milton Berle and Groucho Marx on hand.

George and Gracie’s television show was pretty much an extension of their established radio format: Gracie was the scatterbrained wife who gravitated to wacky situations involving the simplest of domestic circumstances while George was the patient, ever-understanding husband amused by it all. Aiding and abetting Gracie was the Burnses’ friend (and the show’s announcer for Carnation Milk, the program’s sponsor in the early seasons) Bill Goodwin, who had been with the couple during their radio run for Maxwell House (and before that, Swan Soap), Goodwin was with the TV show for just one season before longtime radio veteran Harry Von Zell took his place; Harry not only became Gracie’s accomplice but also a foil for George — who usually ending up “firing” his announcer at least once a week.

George and Gracie also had the prerequisite next-door neighbors in Blanche and Harry Morton, a pair of characters also brought over from the radio show. Bea Benaderet had played Blanche (though the role was also essayed by other actresses) and as Gracie’s confidante and sidekick would achieve her greatest television fame until Petticoat Junction thrust her into the role of star in 1963. Future game show emcee Hal March played husband to Bea in the early George and Gracie TV installments before he quit and passed it off to another radio veteran, John Brown; Brown’s blacklist troubles then led to character actor Fred Clark’s taking on the role of Harry.

When Burns replaced Clark with a fourth actor in the role of Harry Morton in the fall of 1953 — character actor Larry Keating, who would finish out the show’s run in the part — he introduced the “changing of the guard” in a particularly novel fashion for the time; according to legend, the set-up required for Harry to be hit on the head with a vase by wife Blanche, and at the moment Clark was about to be crowned Burns stopped the proceedings, announced to the audience that Keating would be taking over the role and introduced the actor to those watching and the cast, then continued on with Keating being beaned with the vase. The viewing audience must have watched all this with an interesting degree of jadedness, because Burns later remarked that he never received one single letter about how he handled the switch.

For the first two seasons it was on television, The George Burns and Gracie Allen Show was telecast live every other Thursday night, alternating such series as Starlight Theatre and Star of the Family. But George, an astute businessman in his own right, realized that it would be more efficient to film the series and made the decision to do so in the fall of 1952. As financially lucrative as this switch turned out to be, it sort of robbed Burns of the pleasure of performing for a live audience — something he enjoyed very much doing in both vaudeville and on radio. On TV, George would often stand off to one side in the show’s early episodes, wryly commenting on the action in a method that has since come to be known as “breaking the fourth wall;” on one occasion, he told the audience he was too busy to talk to them but that he would wave to them from the next scene (and he did). In the later filmed episodes, Burns would keep tabs on his show via a television set that allowed him to eavesdrop on what Gracie and her chums were up to. The “fourth wall” gags would later get a workout on shows as varied as Green Acres and Moonlighting, and would reach a culmination on It’s Garry Shandling’s Show. (Modestly, Burns would always maintain he swiped the concept from his lifelong friend Jack Benny.)

The Burnses were a childless couple in real life, but had adopted a son (Ronnie) and daughter (Sandy)…and in 1955, both kids started to appear on the series (though Sandy only did a handful of episodes, as she was a bit show business-shy). The presence of son Ronnie added an admittedly puzzling aspect to the show’s proceedings — it was kind of off-putting to see Gracie as a mother, and in fact sometimes Ronnie appeared to be older than his folks. But Ronnie was utilized in many of the show’s plots, with a heavy concentration in the series’ final season, in which a girlfriend in the form of aspiring starlet Bonnie Sue McAfee (Judi Meredith) was also added to the series.

Although The George Burns and Gracie Allen Show was never a phenomenal hit on CBS’ schedule (its highest ranking was #20 among all shows in the 1953-54 season), the program was popular enough that it probably could have continued on for even longer that it did had it not been for Gracie’s insistence to call it quits at the end of the 1957-58 season. Year after year, George was able to cajole “Googie” (his pet name for his wife) into signing on for another go-round but she was insistent about the eighth season being the last. Burns took a stab at doing the show as a single with The George Burns Show in the fall of 1958 (with Benaderet, Keating, Von Zell, Meredith and Ronnie all making the transition) but the show came and went in a single season. (Gracie was often referred to on the new series but was never seen.) George tried again in 1964 with a sitcom entitled Wendy and Me, which featured an ersatz Gracie in Connie Stevens (Allen having passed away in 1961) but, that, too, fizzled. It would take an Oscar-winning performance in The Sunshine Boys (1975) to make audiences realize that George Burns — the architect of he and his wife’s successful act — was more than just a straight man, a fiction he himself long maintained.

The George Burns and Gracie Allen Show was a program I was quite fond of as a kid (though admittedly I saw it the way a lot of folks from my generation viewed it, in perpetual reruns) but over at my weblog, Thrilling Days of Yesteryear, I have long insisted that George and Gracie’s radio show was superior to the TV version for many reasons — chiefly among them the presence of big-name guest stars, which the TV show wasn’t quite able to capitalize on. The other explanation is that Burns and Allen were more a verbal than visual comedy team — they said funny things rather than did them. And yet, when I think about George and Gracie’s TV show, the one thing that always comes to mind is that hall closet in their house where, inside, there was a collection of hats — each one designated with the name of its owner, because many of the visitors to the Burnses home had left without them after being thoroughly gobsmacked from their encounters with Gracie. That’s something they never could have accomplished on radio.