BLOGGER'S NOTE: This post appeared in a slightly different form on Feb. 27, 2009 at Cinema Viewfinder. Tony Dayoub let us borrow it to mark the 40th anniversary of The French Connection. 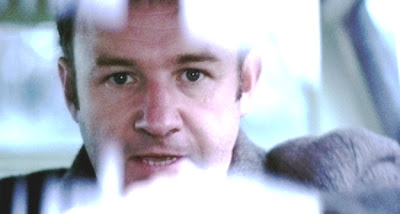 By Tony Dayoub
One of the great, iconic films of the 1970s, The French Connection, marks its anniversary today. A gritty, realistic look at all angles of a huge heroin deal by its then young film director William Friedkin, it also made a star out of its lead actor, Gene Hackman. It also went a long way toward romanticizing the seamy underbelly of New York City.

New York crime films became a staple of '70s cinema due in no small part to films such as Gordon Parks' Shaft (1971) and The French Connection. Movies such as Across 110th Street (1972), The Seven-Ups (1973), The Taking of Pelham One-Two-Three (1974) and Sidney Lumet's Serpico (1973) and his Dog Day Afternoon (1975) were all subsequently inspired to employ the washed out color and grainy look of fast film stock that was utilized so often by documentarians for its flexibility in shooting in low-light situations. The jittery hand-held camera in such films signalled a "spontaneous" stolen shot and an immediacy that was rare before Friedkin's film. And the littered streets of New York's back alleys were often spotlighted, rather than glossed over, in an effort to heighten the raw intensity of the docu-inspired dramas. 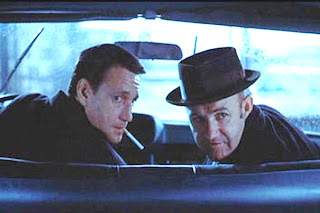 New York cops Eddie Egan and Sonny Grosso had participated in just such a takedown of a heroin smuggling ring a decade earlier, with much the same outcome; the alleged kingpin got away with the crime. But it was still the largest drug arrest of its time. And Egan and Grosso were exciting personalities to base a film on. Egan was a bigoted hothead with a cagey way of throwing his perps off by interrogating them about an incident unrelated to their arrest, "Ever pick your feet in Poughkeepsie?" Grosso was a methodical cynic who helped rein his partner in. Egan harbored the ambition that actor Rod Taylor would play him in the cinematic adaptation of their story. So, as Grosso recounts in a documentary on the Blu-ray, he was very surprised when he was introduced to the mild-mannered man who would ultimately win the role of Jimmy "Popeye" Doyle (based on Egan), Gene Hackman.

As Hackman tells it, even he wasn't sure he could sell the crude facets of Egan's personality. Doyle is a cop with no personal life, save for a predilection for women that might be too young for him. He's an alcoholic, frequently waking up from a bender; in one scene, cuffed to his own bed by a young woman he picked up off the street. In a warning to his partner, Buddy "Cloudy" Russo (Roy Scheider), his deep-seated racism is more than evident:

But he does have an instinct and drive that suits the case that falls in his lap, a drug deal involving a supplier from Marseilles, Alain Charnier (Fernando Rey). Together with his partner, he relentlessly tracks all angles of the case, even on his off-hours, to the point of obsession and exhaustion. This obsession ultimately endangers anyone — cops, innocents — that get between him and his quarry. 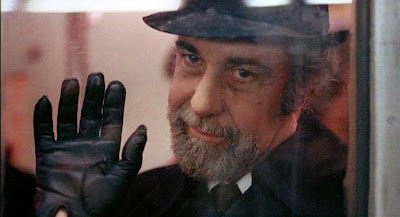 Hackman gives us a nuanced take on what, according to Grosso, was the emotionally one-note Egan. Rather than play the constant intensity of the type-A cop, the actor instead leavens it with a world-weariness that humanizes the driven supercop. The dynamism in his performance makes it even more chilling when Doyle is able to spring into action after an exhausting night, as a sniper tries assassinating him on his way home. This leads to a nerve-wracking chase in which Doyle drives a car recklessly in pursuit of an elevated train. 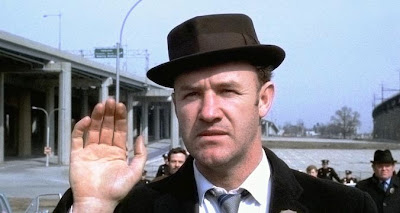 Credit Friedkin for that inspired set piece, which he hyperbolically insists that he shot from inside the car himself, an assertion disputed by the film's cinematographer, Owen Roizman, in a recent interview with Aaron Aradillas on Back by Midnight. He also admits to daring his stunt driver, Bill Hickman, to drive the car (with only a siren on top to warn oncoming traffic) as fast as possible even though no permits were secured to close off the street for the shoot. The driven Friedkin obviously saw a kindred spirit in Egan (and the character of Doyle). The manipulative director, by his own admission, was prone to yelling at Hackman in order to keep him in a constant state of stress. The results are on the screen, though. The French Connection wound up winning Oscars for best picture, best actor, best director, best film editing and best adapted screenplay.

Comments:
Certainly, one of the iconic films from the 70s. Fine look at this one, Tony and Ed. Thanks.