The Boys in the Bank 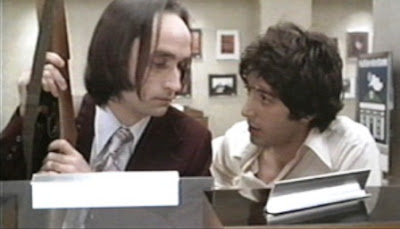 By Edward Copeland
Believe it or not, that was the original title for Dog Day Afternoon, according to Sidney Lumet's commentary track on the great new two-disc DVD release of the 1975 classic. Let's all be thankful that better minds prevailed. I've mentioned before my affection for Dog Day Afternoon and about films that you can watch over and over again. With the new DVD, that sentiment is proven true once again. 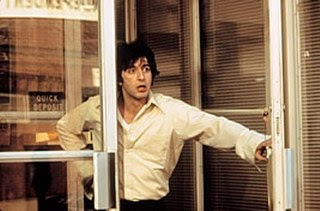 One can really measure the draw of a movie, no matter how many times you've seen it, when you are listening to commentary tracks (even good ones such as Lumet's) but find yourself straining to try to hear the movie's dialogue instead. That held true with the recent DVD release of Lumet's Network and it's equally true with Dog Day. It's such a good thing that the cheesy suggested title which played off the landmark gay play and movie The Boys in the Band was abandoned, because the revelation of that aspect of Dog Day is one of the greatest moments of this alternately comic and tragic tale. It may seem old hat today, but imagine the shock it produced back in its original release. Re-visiting the movie, aside from appreciating its great watchability once again, I was struck by what a great run Al Pacino had in the early to mid-1970s. In an extra on disc 2, there is a promotional "making of" short that was filmed during the filming of Dog Day Afternoon. Lumet says how Pacino's acting always is honest and never produces a false moment. Sigh ... woe that that didn't remain the case throughout Pacino's career. Could Lumet have said that if he'd been able to see into the future and catch a glimpse of Scent of a Woman?

While the documentaries on disc 2 are quite interesting and illuminating, they do repeat a lot of the stuff Lumet talks about in his commentary (or vice versa, depending on which order you watch them in.) There were quite a few nuggets of trivia that I didn't realize. Penelope Allen, who plays the blonde, brash chief bank teller, was a surrogate mother to Pacino. When he left home in his teens to pursue acting, Allen and her husband took him under their wing and he lived with them for several years. For Sopranos fans, there's a "don't blink or you'll miss him" moment where Dominic Chianese appears as the father of Pacino's character. In another Sopranos connection, Judith Malina who plays Pacino's mother, just appeared in Sunday night's episode as the widow Barone. One thing I don't think I ever consciously realized about Dog Day Afternoon and Network (what a helluva one-two punch Lumet produced in 1975 and 1976) is that neither film has a musical score. Both are so involving, they don't need one to emphasize points. I wish more films would take that approach. Certainly, music can enhance many movies, but often they just step on the drama as in the worst of John Williams or just about any Terence Blanchard score on a Spike Lee movie. 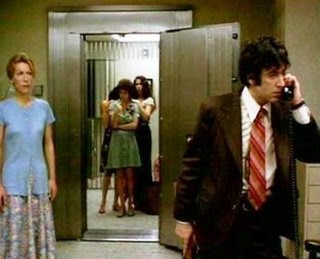 Another thing that the two films have in common, aside from Lumet and their greatness, is that both are really products of their time. Both are loaded with 1970s references that will probably fall flat with young viewers today. Could anyone under a certain age know what Pacino's character is referring to when he starts yelling "Attica! Attica! Attica!" It's one of the most cited moments in film history and I bet most young viewers don't have a clue what it means (and anyone who sees Saturday Night Fever without first seeing Dog Day Afternoon must be doubly puzzled). The other thing that I learned from the DVD is how much of the movie came out of improv sessions. Lumet says he doesn't usually like improv, but he went with it on this one, allowing all the characters and bank hostages to basically devise their own characters (even to the point of insisting that the actors and actresses wear their own clothes). This probably contributes to its rewatchability — it seems fresh because a lot of it isn't just recitation of dialogue from a script.

In addition to one of Pacino's finest performances and the great work by Penelope Allen, the movie contains the finest acting given by John Cazale in his tragically short but amazing career made up of a mere five features that all were nominated for the best picture Oscar (and three of them won!).

On top of those fine actors, Dog Day Afternoon boasts an astounding ensemble that includes Charles Durning, James Broderick, Chris Sarandon (who earned a supporting actor Oscar nomination) and even Carol Kane and Lance Henriksen in tiny roles. If you've never seen Dog Day Afternoon, don't miss the opportunity to watch this solid DVD transfer. I don't think you'll be disappointed. Its humor, pathos and humanity remain undimmed by the 30+ years that have passed since its initial release.

Comments:
Who played the FBI agent? Because I think he was the most frightening FBI agent I've ever seen in a movie.

That was James Broderick.

That's odd; in Making Movies, Lumet mentions having a costumer. Maybe s/he worked with the actor's own clothes:

"For Q&A and Dog Day Afternoon, everything had to feel accidental--no planning, no color control. On both pictures, I told the art director and the costume designer not to consult with each other. I wanted no relationship between the sets and the costumes. Whatever happened happened." (p. 99 [Ch. 6], 1st Vintage ed.)

The man is 81, maybe his memory is getting a little hazy. There were parts of the commentary where he kept getting things out of order and admitting he wasn't good with dates.