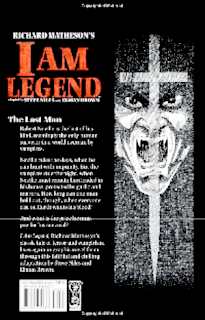 By le0pard13
Richard Matheson remains one of my favorite authors of all-time. When I attended the West Hollywood Book Fair a few years back, it re-ignited my interest in what I believe is the author's seminal novel, I Am Legend. Upon the book's initial release, it was an intriguing mix of horror and science fiction on the vampire mythology in the modern world. Arriving at the fair, I first stopped at one of the comic shop booths before heading over to the initial panel ("Ghost & Goblins: Exploring the Supernatural in Mystery Fiction") that featured author Charlie Huston (who writes his own vampire noir series). Among all of their wonderful comic book offerings, there was one particular graphic novel that stood out — the I Am Legend compilation of the Steve Niles and Elman Brown comic series from the early '90s. While I'd heard of it, I hadn't seen this adaptation in graphic form. Simply…wow. Between looking at its terrific illustrations and seeing how the artists constructed and re-told the author's tale, it was little wonder I was late to that book panel.

Then, upon finding and reaching the discussion, what were Charlie Huston and moderator Leslie Klinger discussing at that very moment? Yep. That same novel, which they then directly credited for being the impetus for much of the written work their panel was examining that day. Soon thereafter, author John Kenneth Muir noted in a blog post (which directly linked to blogger Brian Solomon's The Vault of Horror's list) The Cyber Horror Elite's Reading List: The Greatest Horror Literature of All-Time. This was the result from a panel of distinguished bloggers and writers condensing their favorite horror lit down to the cream of the crop*. What was at 15th rung? You guessed it. So, I felt the need to examine this pioneering novel (the chaser being that it was published the same year I was born). Besides, what better time than the month of Halloween

*That top 30 list drew such an interest-piquing response, B-Sol also posted the remaining novels, short stories and poems that didn't make it there or the honorable mentions list.

"I think the author who influenced me the most as a writer was Richard Matheson."
— Stephen King

It's been more than three decades since I first heard of this novel. I'd estimate I first read the work during the 1970s — which was likely in response to seeing the first of its film adaptations. The story is about one man, Robert Neville, and his fight to survive in a world that's been decimated by a '70s viral pandemic. It was eerie to me then, and strangely apropos with the recent Contagion film release. As far as the lead character is aware, he's the last uninfected man living on earth, and he's doing so among what's left of the population: the infected vampire horde wandering the Los Angeles nightscape. A couple of parallels are fairly obvious when reviewing the work. Daniel 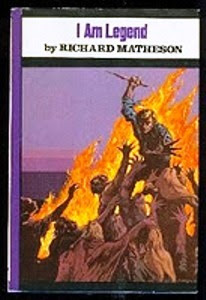 Defoe's Robinson Crusoe tale seems relevant — especially when Neville is boarded up at night in his (desert island-like) home. The dwelling, like him, has become reinforced and hardened to the harsh reality, though his stash of food, drink, and classical music LPs keep him company. His 'Man Friday' could be the seemingly uninfected woman character, the biblically named Ruth. As well, the Cold War paranoia and fear track of the '50s permeates the tale. Matheson unfolds Robert Neville's story in a unique mix of flashback, science, mythological horror and ultimate irony. The fact that Matheson imagined a world (my hometown, actually), some 20 years beforehand, that even 21st century readers could still recognize on their first pass, proves the author was prophetically dead-on (so to speak) with this novel.

The American author/screenwriter's clever use of flashbacks used time (and its passage) as an interesting device in the novel's storytelling. It's a tool that subsequently leveled the distance between the moment in time the reader takes it in and that of the prescient world the author first imagined more than 50 years ago. I believe that tactic made it possible for the book reader to imagine Neville's plight of the damned and whatever future pandemic (natural or man-made) that could yet come. I Am Legend, then and now, was considered the first of the 'modern' vampire novels. Its prominent use of science to explain away old vampire lore, plus subjugate religion's treatment and links in ancient mythology, was a first. In the long run, the novel turned out to be the influential rootstock for so many authors' recent work in the vampire genre. It's hard to imagine many of today's modern blood-sucker tales (with the intertwining vampire and humans storylines) coming about without this one novel breaking through and freely mixing myth and science, or our own use of standards and technology, to explain things in the new vampire narratives. Even George Romero's unique zombie and apocalyptic series (that began with the equally seminal Night of the Living Dead film) would seem difficult to conjure without this novel breaching the surface in 1954. 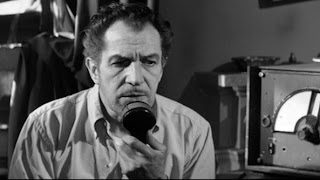 explain the story to me. What can I say? Early teen recall is not worth the hormones they are imprinted upon. And it wasn't until the decade turned (a few years later) that I caught up to The Last Man on Earth on another late night showing. This Vincent Price feature, an Italian production, did have Richard Matheson write its original screenplay, but the subsequent changes and rewrites made to it had him pull his name from the film. However, this film does seem to come closest to the source and spirit of the author's novel. Yes, it suffers in its low cost production values, and the poor dubbing doesn't help matters. Still, I would say it's my sentimental favorite since it's the first telling of this story I ever saw (along with the next film) on celluloid. Price, as Dr. Robert Morgan, does embody Neville's tortured, mocking soul somewhat, although the film doesn't really attempt the book's powerful and ironic ending. Additionally, these first two pushed me to actually read the book that it was based upon. 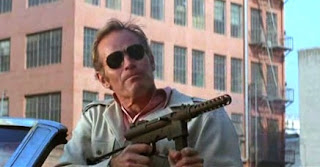 The Omega Man (1971) was the first film adaptation that I saw in an actual movie theater. The Charlton Heston vehicle (along with the subsequent one decades later) began to shift this tale to more of the action/sci-fi genre in its execution and bearing. Gone are the plague aspects of the original work, along with the demythologized vampire text. Enter that period's introduction to the biological warfare scares as imagined by the screenwriter's adaptation in the midst of the Cold War. That, and homicidal mutants (meh). Although, The Omega Man was the only one among all the film conversions to make great and practical use of its L.A. setting and locations (like that originally used in the novel). Unfortunately, this film feels the most dated (hey, it's the '70s). Still, it was entertaining (as long as you let go of the superior narrative in the novel). The film's best moments are Heston being Heston (in his own inimitable way) and any of the scenes that had Rosalind Cash in them (I always admired the late actress and she was never in enough movies, for my liking). Yet I have to agree with my good friend, blogger Livius, on another of its charms:


"The other aspect that endears this film to me is Ron Grainer's achingly melancholic score — a real thing of beauty in my opinion."

This century's adaptation was the third film version, but the first to use the original title of Matheson's novel. I Am Legend (2007) also returned to the concept of a viral pandemic in this re-telling. And it has two of the most charismatic performances among all of these screen adaptations. Will Smith and Alice Braga, you say? Ah…no. Substitute Samantha the dog as lead actress and you have that couple

(and Will was hard pressed to garner more acting praise than her). For the record, Ms. Braga does indeed look better than the dog, but Sam simply acted better. Unfortunately, the film overemphasized its special effects and action over the original story's tenets. Plus, this one was a prime example of the filmmakers' tendency to overuse computer effects as characters of late. They were, to put it mildly, some of the worst CGI characters in any of the large budget, high profile film releases of the '00s. There, I said it. The final insult on top of injury, however, with I Am Legend was the use of an ending (be it the one in the theatrical cut or the alternate ending included on the DVD release) that seemed to be the antithesis of the novel's. And unfortunately, the film made a ton of money at the box office. So much so, the studio at one time was preparing for something that should have been abhorrent to anyone who appreciated the original book: a prequel. Luckily, if it's to be believed, that project is dead.

Note: I Am Omega was a direct-to-video release that also came out in 2007 and has yet to be screened by me. Perhaps, one day…

Also in 2007 (in conjunction with the late year release of the above film), the original novel was re-issued (yet again) by a book publisher. And for the first time, Blackstone Audio published an unabridged audiobook for the legendary work. The high profile nature of the then upcoming film, and the importance of bringing a trailblazing novel to the spoken word form, necessitated the studio managers bring out one of its big guns for this first audio treatment. Narrator Robertson Dean, he of the "sonorous, classically disciplined bass-baritone" voice, was selected as the reader. As one of my 2008 reads/listens, all I can say is it was one of the best audiobooks I heard that year. His superlative reading gave a voice to that of the character of Robert Neville I hadn't imagined. And since it all came from the original novel by author Richard Matheson, without abridgement or adaptation, I'd recommend it hands down to anyone who wishes to visit his renowned story. And perhaps, this would include any of the aforementioned film versions (though the earliest of these are worth screening).

The I Am Legend novel remains a masterpiece of modern fiction by one of the true pioneers of books, television and film. Richard Matheson wrote novels of mystery, science fiction, horror, fantasy and, believe it or not, Westerns. Name a writer's award, and he's probably won it (the Hugo, Edgar Allen Poe, Golden Spur, and the Writer's Guild awards to name a few). And if I were to pick just one of his works to be emblematic of his skill and genius at writing, I don't think I could do better than naming this novel to represent that. It's a pity, but not too much of a shock, that the film treatments of the work don't really come close to the pages laid down more than half a century ago. And since I can't do better than that, I'll let the novel's final words close this out:


"Robert Neville looked out over the new people of the earth. He knew he did not belong to them; he knew that, like the vampires, he was anathema and black terror to be destroyed. And, abruptly, the concept came, amusing to him even in his pain.

A coughing chuckle filled his throat. He turned and leaned against the wall while he swallowed the pills. Full circle, he thought while the final lethargy crept into his limbs. Full circle. A new terror born in death, a new superstition entering the unassailable fortress of forever.