Come On, Get Happy 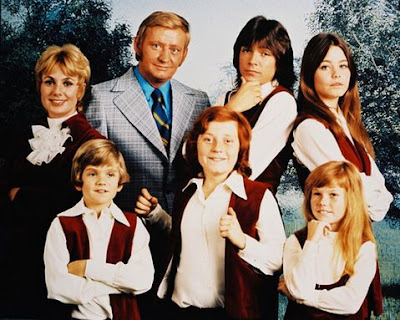 By Ivan G. Shreve, Jr.
With the success of pop music hits like "The Rain, the Park and Other Things" and "Indian Lake" — and appearances on the likes of shows hosted by Ed Sullivan, Mike Douglas and Johnny Carson — the recording group known as the Cowsills had been approached by Screen Gems about the possibility of headlining their own TV sitcom. Veteran scribe Bernard Slade, who had created and developed such shows as Love on a Rooftop and The Flying Nun, thought the history of the group — made up of five brothers, a sister and their mother — would make for good television; the Cowsills already had appeared in an NBC television special (dubbed A Family Thing) in 1968 with Beverly Hillbillies star Buddy Ebsen.

As to why the group’s plans to become sitcom stars fell through — well, it depends on who’s telling the story. Some say the members of the group couldn’t act…others argued the kids were too old. But the general consensus is that once Screen Gems convinced Academy Award-winning actress Shirley Jones to climb aboard (she would play the part of the mom, based on Barbara Cowsill) the only involvement the Cowsills would have from that point on would be to be able to brag that they provided the inspiration for a musical comedy series that premiered on ABC 40 years ago today on this date: The Partridge Family.

Widow Shirley Partridge (Jones) is just trying to make ends meet with a large family that includes 16-year-old heartthrob Keith (David Cassidy), 15-year-old Laurie (Susan Dey), 10-year-old junior con man Danny (Danny Bonaduce), 7-year-old Christopher (Jeremy Gelbwaks) and 5-year-old Tracy (Suzanne Crough). Her kids have put together their own band out in the family garage, and one day ask their mom to help out by contributing vocals to a song they’re recording because their lead singer is down with a case of the mumps. With tape in hand, hustler Danny is able to persuade record company executive Reuben Kincaid (Dave Madden) into taking a chance on releasing the family’s record…and when the song takes off, the Partridges found themselves the latest pop music sensation. In a “psychedelic” school bus that they’ve painted themselves, the musical aggregation sets off “on the road” while at the same time trying to balance a “normal” life involving school and family. And thus…a series is born.

The Partridge Family, premiering on a Friday night, became a linchpin in a youth-oriented television schedule on ABC that also included The Brady Bunch and Room 222. Family was never a huge ratings smash (its highest ranked season was its second, where it was No. 16 among all network shows in 1971-72) but because of its lucrative demographic appeal to young viewers. ABC was very pleased with its modest success. The show also made “rock ‘n’ roll” less threatening to older audiences — who could object to a squeaky-clean rock group whose mom was an active participant?

But the only sold-out venues played by the Partridges existed solely on television — because in reality, the group was as manufactured as The Monkees had been four years earlier. The Partridges, to a large extent, were the “anti-Monkees”; whereas the “pre-Fab Four” eventually chafed at not being able to play their own instruments and write and sing their own songs, Shirley and Company were perfectly content to let studio musicians simulate the “Partridge sound” — only Jones and stepson Cassidy did any of the actual singing. This did not, however, hamper their chart success — their debut single, "I Think I Love You," became a million-selling smash (at the time of "Love You"’s release, the Partridge Family was only the third fictional group — along with The Chipmunks and The Archies — to have a No. 1 single)…and was followed by a series of successful singles afterward; titles like "Doesn’t Somebody Want to Be Wanted," "I’ll Meet You Halfway" and "I Woke Up in Love This Morning." Cassidy, who had signed with the record company as a solo act, would be the only Partridge to do any real touring; he became a teen idol recognized all over the world (including the USA, UK, Europe, Japan and Australia) and his picture frequently adorned covers of every fan magazine on the market.

The successful music tie-ins are really why the show is remembered so fondly by fans today; the Partridge Family’s music was such a hit with the young television audience that The Brady Bunch eventually tried to horn in on their racket by recording their own albums. In fact, there were quite a few similarities between the two shows, which tried in their oh-so-hip way to be relevant in speaking to the younger generation. The Partridge’s dog, a shaggy mutt named Simone who looked like the poor relation of My Three Sons’ Tramp, disappeared in much the same way the Bradys’ mutt-in-residence (Tiger) after the first season. Not only did the family lose their beloved pet — actor Jeremy Gelbwaks, who played the part of Chris, was forced to abandon the series after its freshman year because his family moved out of California when his father’s job relocated them elsewhere. A moppet actor named Brian Forster replaced Gelbwaks for the rest of the show’s run and, according to creator Slade, the network never received one letter of complaint about the switch. (Of course, for television audiences used to seeing two Darrin Stephenses and two Gladys Kravitzes on ABC’s Bewitched it’s possible they were used to such shenanigans by that time.)

The Partridge Family had their “Cousin Oliver” moment during the show’s fourth season when they added a 4-year-old actor named Ricky Segall to the cast; as next-door neighbor Ricky Stevens, Segall was yet another insufferable little brat on a program that already had too many to start with. The ratings for the fourth season took a nose dive — but it wasn’t Segall’s fault; the network inexplicably moved Family to Saturday nights in the fall of 1973 to compete against the No. 1 show on television, CBS’ All in the Family, and NBC’s Emergency! After 96 episodes of singing along, ABC foreclosed on the Partridge’s “San Pueblo” property and Family checked into Hotel Syndication.

The Partridge Family was a disappointing performer in reruns, and it wasn’t until the series became part of Nick-at-Nite’s lineup in the mid-'90s that it sparked interest among a newer generation of viewers who were unfamiliar with the show during its original run. (An animated cartoon series, Partridge Family 2200 A.D. , came and went on Saturday mornings in 1974; it was not particularly successful despite the presence of a few cast members lending their voices to the production.) Family hasn’t dated well at all, but fans of retro have embraced it to their bosoms as a representative artifact of '70s fashion and culture.

As for the Cowsills — well, they charted a few hits afterward, notably the million-selling smash "Hair" which was culled from the successful stage musical of the same name…and the group also appeared in a successful television ad campaign for the American Dairy Association, as well as singing the theme song to Love, American Style — a show that was also part of ABC’s Friday family lineup. But like most groups, they weren’t able to maintain their previous success and found themselves plagued by member defections and the usual ups-and-downs in the music biz. At a benefit concert in L.A. in 2004, the Cowsills were introduced to a nostalgia-stoked audience by Partridge mom Shirley Jones, who informed the crowd that the Cowsills were “the real thing” — and then they launched into a rendition of "I Really Want to Know You", which had at one time been recorded by both the “real” group and the “fictional” one. Truly an awe-inspiring, life-imitates-art moment.

Ivan G. Shreve, Jr. blogs at Thrilling Days of Yesteryear, and always preferred The Brady Bunch to The Partridge Family, even though the Bradys couldn’t carry a tune in a bucket. He does, however, consider the child-hating Reuben Kincaid to be one of his personal role models.

Comments:
Great blog! Enjoy the rest of your weekend. :)

I never cared for the show much except for Danny because he was such an incorrigible schemer. It was refreshing to see a kid portrayed as underhanded and not learning lessons on a family comedy. Of course, when you get down to it, they only had three kids. The two little ones had no personalities whatsoever. At least all the Bradys were distinctive.

The two little ones had no personalities whatsoever.

Yeah, the youngest one sticks a drumstick up her nose in the debut episode...and I think that was pretty much her defining moment.