Whose right is it anyway? 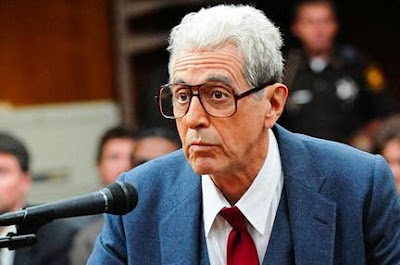 By Edward Copeland
Granted, I'm late to the game when it comes to reviewing HBO Films' You Don't Know Jack, but my living situation delays my access to HBO products since I can't receive the channel in my room and it sometimes takes awhile for me to either get my hands on a copy of an HBO program or be able to be in the living room long enough to enjoy one. In the case of this film, with Al Pacino portraying Dr. Jack Kevorkian, it was well worth the wait.

Directed by Emmy nominee Barry Levinson, You Don't Know Jack, with an Emmy-nominated script by Adam Mazer, takes an almost documentary approach to the infamous assisted suicide advocate. It certainly doesn't paint Kevorkian as a saint, but it doesn't advocate euthanasia either, even though the few opponents to euthanasia do come off looking like the irrational ones. (Of course, I'd argue, "How could they not?")

Pacino, making his second appearance in an HBO production, again turns in one of his best performances in years as he did when he won an Emmy as Roy Cohn in HBO's Angels in America. Perhaps the small screen calms down the over-the-top tendencies the actor has developed in his later years in most of his movies. Then again, maybe he's still doing penance for Scent of a Woman. Whatever the reason, Pacino disappears into the role of Kevorkian and delivers one of his finest turns.

Since the Michigan legal battles of the 1990s that eventually sent the "unemployed" pathologist to jail for his part in helping the terminally ill end their suffering, voters in Washington, Oregon and Montana have all approved measures legalizing physician-assisted suicide. Kevorkian himself has been released from prison but can no longer practice his cause because he'd be sent right back to a cell.

The movie starts pretty much at the beginning of Kevorkian's cause when he first really witnessed the unmerciful way the health care system handles end-of-life care and began to develop the idea of assisting people himself, first with the help of his sister Margo (Emmy nominee Brenda Vaccaro's best work in ages) and longtime friend and med tech turned medical supplier Neal Nicol (John Goodman, who also earned an Emmy nomination though he was snubbed as were many others for their great work in Treme, grumble grumble).

Later, they are joined by Janet Good, the at-first skeptical head of the local chapter of The Hemlock Society (Emmy nominee Susan Sarandon), who looks down upon Kevorkian's threadbare clothing for such a serious mission.

If the film's casting has an imperfection (and unfortunately it does) it's the still mystifyingly employable Danny Huston, as bad as he always is but also trapped beneath a particularly unsightly wig, as Kevorkian's grandstanding and politically ambitious attorney Geoffrey Fieger. If Fieger in reality argued the doctor's many cases as badly as Huston does playing Fieger, Kevorkian wouldn't have been able to go on with his work as long as he did.

Huston aside, the performances are excellent across the board and it does present a warts-and-all portrait of Kevorkian. Though the doctor does come off as a prickly eccentric, his arguments do make sense at time. Why should a lucid person in pain not have the right to end their suffering while the government will allow an unconscious person to be taken off feeding and breathing tubes to essentially starve to death? Which is more merciful? It's really hypocrisy since it's an open secret that for the most part families do get doctors to help hasten their suffering and dying relatives' ends anyway, though none of these people serve jail time. As with so many issues in this country, it's the unfortunate price we pay for living in a country where the majority of adults aren't grownups.

For me, some of the key scenes are the ones when Kevorkian tells people he won't help them, recognizing that their suffering isn't of the physical kind and showing that Kevorkian is not a "Dr. Death" getting off on ending lives. He'll turn down requests. We'd be so much better off if more people recognize the distinction between the someone who is living a life of physical suffering that is only going to worse and would rather choose their own means of peaceful exit and someone who has the blues because their girlfriend dumped them.

It's doubtful that You Don't Know Jack would change opinions on assisted suicide one way or the other but beyond the issue it is a well-made telefilm with some excellent performances led by the astonishing one by Pacino as Kevorkian.

Comments:
I really enjoyed this film and agree with most of what you say. (Danny Huston's performance didn't bother me that much; and since then I've seen the real deal in interviews and feel convinced Huston captured Feiger's weirdness pretty well.) Vaccaro is a revelation, and Pacino does something for me he hasn't done since Dog Day Afternoon: make me laugh. I've always felt comedy was his weak link but, frankly, I'm not so sure now. Maybe it takes the right director. Certainly Pacino gives this performance his all. There's even a few lines where his voice does NOT his trademark huskiness which supports my theory that that voice thing is all schtick.

Throw in Pacino's wonderful input in the Cazale doc (that HBO aired in June) and he's on a roll (in my book)!

Haven't seen it but I've really been wanting to. I agree with you in terms of him calming down on the small screen (though watching him chew scenery is always fun!).

I really want to see this one for myself now.