"I woke up — and I've been awake ever since" 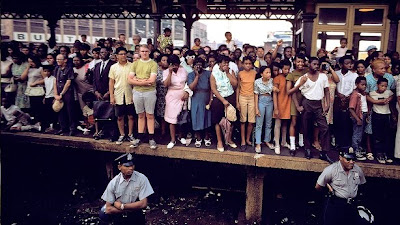 "As he said many times in many parts of this nation
to those he touched and those who sought to touch him,
'Some men see things the way they are and ask why?
I dream of things that never were and ask why not?'"
Sen. Edward Kennedy in his eulogy to his brother Robert in 1968
By Edward Copeland
HBO2 has been trying to differentiate itself more and more from its father network by running documentaries exclusive to it. A recent example was the thoughtful look at life in Rwanda after the genocide, Earth Made of Glass. Tonight, the channel offers another interesting example in One Thousand Pictures: RFK's Last Journey. While most people who have HBO have HBO2 as well, it's a shame if there is anyone out there who miss the solid works because they have the original but not its sequel.

The idea behind One Thousand Pictures comes from the photographs of Paul Fusco, who rode on the train that bore the casket carrying Robert Kennedy from his funeral mass in New York on June 8, 1968, to Washington, D.C., for his burial at Arlington National Cemetery. Along the train's route, huge throngs gathered along the tracks to honor the fallen presidential candidate. Fusco captured literally more than a 1,000 photos of these gatherings and the documentary's filmmakers went back and tracked down many of the people in the photos to interview them now.

A striking stylistic choice is that since that photos Fusco took in 1968 all were in color, the interviews filmed now are done in black-and-white. The documentary and witnesses not only re-create a time and place, it also shows the last influence RFK had on them, such as a nun from South Africa who was in the process of becoming a U.S. citizen just to vote for him and how it "woke her up" to others who remain pessimistic about their country because of his assassination. They also talk to Frank Mankiewicz, who was his press secretary and saw things from the train, and talks about missing "the clarity of his vision."

There also are side stories to the funeral train that lumped tragedy upon tragedy including two were viewing the funeral train and got killed by another train passing and another man nearly electrocuted to death when he climbed on top of an empty boxcar and accidentally touched a high voltage wire.

One Thousand Words: RFK's Last Journey is a short, interesting look at a particular moment in history. It premieres tonight on HBO2 at 8 p.m. Eastern/Pacific and 7 p.m. Central.