The truth passes through the fire but it does not burn 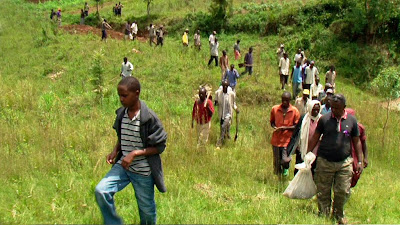 By Edward Copeland
While the debate over whether to intervene in Libya to save lives flared up recently, a tale told repeatedly was how officials in the Obama Administration who also served in the Clinton Administration remain haunted by their inaction during the genocidal bloodshed that killed an estimated 500,000 to 1 million people in a four-month period in 1994. The documentary Earth Made of Glass, which premieres Wednesday night exclusively on HBO2, returns to Rwanda to see how a country tries to remake itself and move on when it has experienced such a catastrophic human tragedy.

The film, directed by Deborah Scranton and which includes among its executive producers the actor Channing Tatum, takes its title from Ralph Waldo Emerson.

"There is no den in the wide world to hide a rogue.
Commit a crime and the earth is made of glass."

Earth Made of Glass basically covers two stories: Interviews with President Paul Kagame, the former head of the Tutsi rebel militia that overthrew the minority Hutu government that led that Tutsi massacre; and Jean Pierre Sagahutu, a man who survived the Tutsi genocide that claimed the lives of his parents, three brothers and two sisters.

Sagahutu's story provides the most emotional and riveting portions of Earth Made of Glass. He survived the time of the massacres by hiding in a septic tank where a friend slipped food to him on a dog chain two or three times a week. Since then, he's been determined to learn the truth surrounding the circumstances of his father's murder. His father was a doctor. All his son knew was that he got a call from his hospital telling him he was needed, a car came and picked him up and somewhere on the road, he was taken out of the vehicle and killed on the side of the road.

"Why did they kill them?" he asks, not just about his family but of the many who were slaughtered. "Because they were Tutsi. They didn't ask to be Tutsi. They were born that way."

Sagahutu doesn't seek vengeance — he merely wants the truth as to what happened. As President Kagame says at another point in the documentary, "Forgiveness is necessary, but knowing the truth of what happened makes it easier." Sagahutu, himself now the father of two sons, feels that obligation to try to explain what happened to them just as Kagame tries to restore his shattered country for future generations. Late in the film, when Sagahutu does finally learn the facts surrounding his father's murder, he admits that he can't bring himself to forgive.

"I'm not ready to forgive," Sagahutu says, "It's more important to teach my children to make peace than teach to forgive."

Kagabe's path to "truth" has been controversial. In 2008, he released a report on the genocide that accused France of large involvement in the war, including training Hutu militia, covering up its own role and taking part in some of the killing. Three months later, his chief of protocol and closest aide, Rose Kabuye, was flying overseas ahead of Kagabe on a planned trip and was intercepted at the Frankfurt airport and arrested on a French warrant, accused of terrorism.

There is a taped interview with Bernard Koucher, the French minister of affairs under Francois Mitterand at the time, admitting that he warned Mitterand against getting involved in Rwanda but saying Mitterand sent two batteries of soldiers in anyway, only to later to withdraw them and then send in more later under the guise of a humanitarian mission. Koucher says he didn't think Mitterand had any sinister motive behind backing the Hutus, though he did tell him that the Tutsis usually had support from English-speaking places, as if backing Hutus meant defending the French language.

One piece of history that I didn't realize that definitely seems to have led to the tribal tensions started under colonialism. Belgium, who held Rwanda until it granted it independence in 1962, began marking Rwandans as Hutus and Tutsis in the 1930s and issued ID cards, beginning the conflicts, which escalated when the minority Hutus took over the government and lived in constant fear of the Tutsis. Just a cursory check through several sources raised some questions in my mind about whether the documentary is a bit too slanted toward Kagabe without telling his full story.

Kagabe, when recounting the ID system that the Belgians started, says that the Hutus had their own version of Hitler, Juvenal Habyarimana. While it is true that as president, he did lead a huge propaganda campaign to try to pain the Tutsis as evil, the event that sparked the genocide was his assassination when his plane was shot down by a rocket, an attack many, including France, accuse Kagabe of being responsible for doing. It was the shock of his death that led the Hutus to go on their massive killing spree. There's also talk that current warfare in Congo, where many sought refuge during the war, is backed by Kagabe trying to finish off Hutus who were part of the killing spree.

The public Kagabe in Earth Made of Glass though speaks of reconciliation and reintegration, bringing back home those who fled to Congo. He also has abolished the ethnic IDs and set up community courts to try genocide cases with neighbors as jurors. Rwanda and France re-established diplomatic ties under Nicolas Sarkozy and he visited in 2010, the first French president in 25 years.

What makes Earth Made of Glass being hopeful instead of just depressing comes out of following Sagahutu's story, even though it's steeped in sadness and stems from a tragedy. He asks his son about his soccer team and asks him if he knows who on it is a Hutu and who is a Tutsi and the boy admits he has no idea, they all are just Rwandans to him. If only the entire world could be like that. Earth Made of Glass premieres at 8 p.m. EDT/PDT/7 p.m. CDT Wednesday on HBO2.