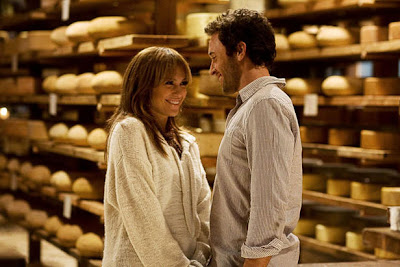 By Liz Hunt
How times have changed.

Until the Summer of Love, a single woman having a baby was something kept a family secret. From that time, single moms went from being divorced with children to the current situation where any woman who wants a child can pretty well have one and no one cares.

The Back-up Plan takes advantage of the great number of woman, who, if they aren't married or have a steady guy, can plan to have a baby by using a sample from any sperm bank.

Zoe (Jennifer Lopez) is a woman who has reached that point. She owns a pet store and has just been inseminated by donated sperm from a bank. As she leaves the doctor's office in the pouring rain, she grabs a cab and slides into the back seat at the same time a soaked guy enters from the other side. After a crabby conversation, both get out and lose the cab.

Stan (Alex O'Loughlin) likes what he sees, Zoe is more hesitant since she already has what she wants. Days later, they meet again at a farmer's market, where Zoe learns Stan works at his family cheese farm and is selling goat cheeses. Another misfire between the two, but Stan has learned more about Zoe and finally catches her at her pet shop.

Zoe gives Stan a chance, still not mentioning her pending pregnancy. Their first date starts well but goes bad quickly in a really funny way. The rest of Zoe and Stan's story is pretty predictable with some insanely funny moments.

Stan falls for Zoe and her unborn baby and together they experience the time when her regular sexy clothes don't fit any more, her membership is a diverse and hilarious group of single mothers in a support group, shopping for baby clothes and a big surprise during an ultrasound.

Yes, The Back-up Plan is a totally formulaic romantic comedy, but its comedic set pieces are simply hilarious, making this an OK date movie, but a truly great chick flick, especially for mothers. While the first date is lovely, then funny, as the pregnancy progresses, a few scenes set new standards with what's funny to a woman.

Meg Ryan's pivotal scene in When Harry Met Sally... is topped in a make-out scene between Zoe and Stan. A scene with a woman having a water birth in a New York apartment living room in a kiddie pool sets a new standard in how hard a woman can laugh and cry at the same time. Men will laugh as well, because the woman in the tub does an amazing array of funny faces and sounds. Lopez and O'Loughlin's faces play into the scene with their varying amounts of horror and disbelief.

For the most part, The Back-up Plan succeeds on Lopez's acting. She does humor well and has picked a film that will give her movie career a boost, and perhaps launch O'Loughlin's career as a leading man.

There is a slight twist at the end, and try to stay through the credits for the outtakes. It's worth it.