Say you want a revolution? 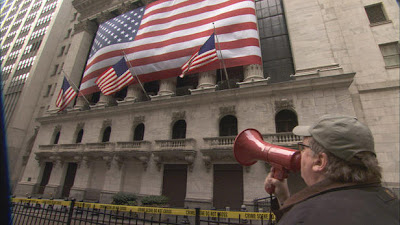 By Edward Copeland
When I wrote about Ninotchka for its anniversary last year, I titled the post Capitalism: a love story, so I gave serious thought now that I'm reviewing Michael Moore's Capitalism: A Love Story of calling it Ninotchka, but I figured too few would get the joke.

Unlike Moore's last film, Sicko, Capitalism: A Love Story has a more scattershot theme, namely the decline and fall of the American middle class due to the avarice of the richest of the rich and the politicians who enable them (or is that the other way around?) Thankfully, Moore doesn't distract himself too far afield as he has done in previous efforts such as Bowling for Columbine and Fahrenheit 9/11, but while everything he shows is related to the same idea that capitalism has warped into an inherent evil, the film lacks an overarching throughline to really drive the anecdotes home.

Since I'm not a particularly religious person, why aren't more religious leaders quoting the Bible passages that the clergy in the film do to show that Christianity embraced the poor, not the wealthy, especially when the wealthy have so hoodwinked the religious to be on their side over social issues? I've always known about the days when the top income tax bracket was 90 percent and how amazingly ridiculous that sounded until JFK cut it, but the rich still lived liked kings in those days and the middle class lived good lives as well with four weeks of paid vacation a year being the standard. Today, the highest incomes whine about an increase to a 39 percent tax bracket? Forgive me if I can't work up any sympathy tears for having to give back more of their million dollar bonuses. Boo-fucking-hoo.

Not that the stories aren't effective (or downright depressing) or that he doesn't find some fascinating footage (most notably FDR's call for a Second Bill of Rights), but somehow the film just doesn't quite come together. It's not that it isn't illuminating at times or that it doesn't get your ire up, but when it gets to what should be the film's inspiring climax with the victory of the laid-off workers at the Chicago window and door plant, the viewer more likely will be exhausted and depressed than inspired to join the fight to change things.

Sadly, that's how the power brokers always end up winning and the rest of us get stepped on time and time again. In the film's final scene, Moore is spreading crime scene tape around one of the many Wall Street banks that looted the American taxpayers and got richer as a result and avoided any new regulations to avoid future financial calamities that affected we poor peasants. Moore looks exhausted and even says that he can't do it anymore, it's up to us. Not exactly a rousing endnote.