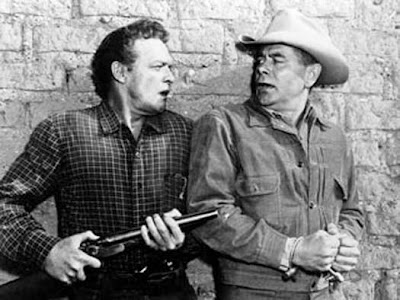 By Ivan G. Shreve, Jr.
In 1984, despite my father’s strenuous objections that a VCR was a “luxury and not a necessity” I purchased my very first VHS videocassette recorder with a bonus I received from my place of employment. As a movie buff, I was pretty jazzed at the thought of being able to record films for the purpose of building a library so that I wouldn’t have to wait until the next time a favorite came on — I had even purchased several dozen videocassettes from the public domain bins at our local Wal-Mart in anticipation of eventually investing in a VCR.

One of the first movies I taped was one of my all-time favorite Westerns — 1957’s 3:10 to Yuma, in which a notorious outlaw played by Glenn Ford is kept under guard by a man who’s so desperate for the $200 he’s being paid (he plans to use the money to buy water for his drought-stricken ranch) that he vows nothing will keep him from making sure Ford is put on a train that will take the two of them to the titular city…even though Ford’s gang outnumbers him and is planning to gun him down the minute he sticks his head out of the hotel in which they’ve hid. The actor playing this man who remains courageous in the face of overwhelming odds was born on this date 100 years ago today, and would not only become one of finest stage and screen actors of his generation but gain an enthusiastic fan of his work in myself long after his death in 1971: Van Heflin. 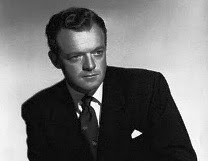 Emmett Evan “Van” Heflin, Jr. was born in Walters, Okla., in 1910 to Fannie and Dr. Emmett Heflin, Sr. — the senior Heflin being a dentist. Schooled in Oklahoma in his formative years, Heflin relocated in California after his parents separated and upon graduating from high school, answered the siren song of the sea by shipping out on a tramp steamer for a year of nautical adventure. He returned to Oklahoma in pursuit of a law degree but two years into his studies found himself yearning for salt air and sea spray once more — a pastime that would remain with him for the rest of his life.

Since childhood, Van also expressed an interest in acting, and made his stage debut in the late 1920s in a performance of Channing Pollock’s Mister Moneypenny. When that play folded after 61 performances, Heflin returned to his lady love, spending the next three years sailing up down the Pacific. After that, it was back to the footlights for a series of various short-lived stage productions until he finally landed a plum assignment in S.N. Behrmann’s End of Summer in 1936. That was also the year he made his film debut alongside Katharine Hepburn in A Woman Rebels; a job that won him a contract with RKO and led to roles in such B-pictures as The Outcasts of Poker Flat (1937), Flight from Glory (1937), Annapolis Salute (1937) and Saturday’s Heroes (1937).

Heflin’s Woman co-star Katharine Hepburn requested that he play the part of reporter Macaulay Connor in her successful stage triumph of The Philadelphia Story — but unfortunately, MGM cast Van aside in favor of James Stewart in the 1940 film version. It wasn’t a total loss for the actor, however; he got a contract with the studio out of it and began to make more movie appearances along the lines of The Feminine Touch (1941) and H.M. Pulham’s Esq. (1941). His third assignment for Leo the Lion cast him as the alcoholic, Shakespeare-spouting buddy of gangster Robert Taylor in Johnny Eager, which received a December 1941 premiere but didn't get wide release until the following year and ended up nabbing him the 1942 best supporting actor Oscar. His film career, however, did not end up suffering beneath the “Oscar curse”; although he was still making appearances in B-pictures such as Kid Glove Killer (1942) and Grand Central Murder (1942), MGM began grooming him for leading man roles — notably Tennessee Johnson (1942), an entertaining (if wildly inaccurate) biopic of the 17th president of the United States, Andrew Johnson. 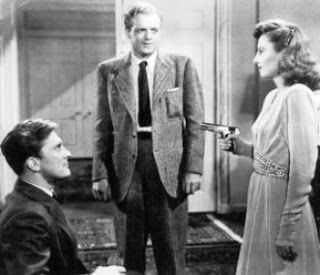 Heflin’s career on the big screen took a brief hiatus during World War II to allow him to “do his bit” — though he didn’t completely stray from the business; he served as a combat cameraman with the Motion Picture Unit and also the Ninth Air Force in Europe. But he returned to pictures in 1946 with The Strange Love of Martha Ivers, a crime melodrama that featured Barbara Stanwyck, Lizabeth Scott and, in his film debut, Kirk Douglas. In Ivers, Van played the part of Sam Masterson, a vagabond whose return to his home town threatens to expose a hidden secret kept between old flame Babs and her D.A. husband Kirk (this time it was his turn to play the drunk). Ivers would establish Heflin as a frequent participant in the film style labeled by the French as “film noir”; his other films in this vein included Possessed(1947), Act of Violence (1948) and The Prowler (1951). The latter two would feature two of the actor’s most memorable performances: Violence cast him as an ex-GI-turned-successful-businessman who finds himself being stalked by a slightly unhinged Robert Ryan (also an ex-GI). In Prowler, Heflin is an ambitious cop who kills the husband of a wealthy woman (Evelyn Keyes) and then marries her in a twisted pursuit of the American Dream. Heflin’s noir credentials would even stretch over to radio; he played Raymond Chandler’s famous shamus Philip Marlowe in a summer series over NBC Radio in 1947 that, as a lifetime OTR fan, I think was superior to the better-known 1948-51 CBS version with Gerald Mohr.

As an actor, Van Heflin displayed a tremendous range and versatility — he demonstrated an ease and comfort in musicals (Presenting Lily Mars, Till the Clouds Roll By), costume pieces (The Three Musketeers, Madame Bovary) and dramas (B.F.’s Daughter, East Side, West Side). 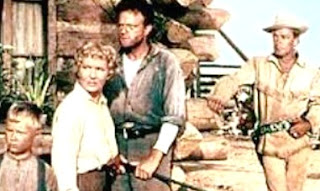 In 1953, he would appear in what probably remains his best-known film, the classic Western Shane — Heflin plays Joe Starrett, a simple homesteader whose battle against a powerful cattle baron Rufus Ryker (Emile Meyer) is joined by the titular gunfighter, played by Alan Ladd. Shane becomes Starrett’s farmhand and the idol of Joe’s young son (Brandon de Wilde)…and is also drawn to Starrett’s wife Marian, played by actress Jean Arthur in her final theatrical film appearance. One of my favorite moments in Shane occurs during a rousing fistfight between Starrett, Shane and Ryker’s hired goons — at one point during the ruckus, Starrett and Shane look at one another and grin in solidarity and then go back to punching out the lights of the villains. A similar sequence occurs earlier in the film when Shane helps Starrett remove a large stump from his property; it’s been suggested that there’s a hidden attraction between Marian and Shane but I find the camaraderie exhibited by Shane and Starrett to be every bit as interesting as well.

Shane is no doubt Helfin’s best-recognized cinematic showcase but my favorite of his film performances is in the movie I mentioned at the beginning of this essay. I’ve always been a huge fan of Van’s character, Dan Evans, and how he insists on carrying out his volunteered duty of escorting Glenn Ford’s outlaw Ben Wade to that 3:10 locomotive despite the overwhelming evidence that it’s a suicidal mission at best. It’s not about the money; Ford offers him a bribe that dwarfs the piddly two hundred clams Heflin’s signed up for — it’s all about principle and doing the right thing. The Western movie would serve Heflin’s amazing acting versatility well; among the memorable oaters he also graced include The Raid (1954), an underrated tale about a group of escaped Confederate prisoners who plan to rob a bank and set fire to a town during the Civil War; Count Three and Pray (1955), in which Heflin plays a reformed wastrel-turned-pastor who encounters trouble in the small town he’s chosen to preach; and Gunman’s Walk (1958), in which his rancher must mediate the conflict between his two strong-willed sons (Tab Hunter, James Darren).

Other outstanding performances in Heflin’s catalog include the films Battle Cry (1955), Patterns (1956), They Came to Cordura (1959), Stagecoach (1966), The Ruthless Four (1968) and his final feature film, Airport (1970) — in which he played the sympathetic but nevertheless twisted antagonist whose on-board bomb sets the film’s plot in motion. In between his film assignments, Van continued to distinguish himself onstage in productions of A Memory of Two Mondays, A View from the Bridge and A Case of Libel. He reprised his role from this last production for television in 1968 and was nominated for an Emmy for Outstanding Single Performance in a Drama; in fact, his last show business project was an appearance in a 1971 television drama entitled The Last Child. He succumbed to a heart attack (while enjoying a dip in his pool) not long afterward at the age of 61.

Heflin once memorably remarked in an interview: “Louis B. Mayer once looked at me and said, ‘You will never get the girl at the end.’ So I worked on my acting.” And fans of this remarkably talented actor are all the richer for it; Van Heflin may not have been a conventional handsome leading man by Hollywood standards — but he left behind a legacy of film performances that would make any “pretty boy” green with envy. I’m proud to call myself a fan.

Comments:
He always was good. I particularly liked him in Act of Violence and East Side, West Side and of course 3:10 to Yuma.

Great piece, Ivan. Heflin was a consistently fine player who always brought more to the role than what was on the page - I particularly love his shifty anxiety in Act of Violence, although, as you note, there's a wellspring of great performances to choose from.

The story I knew was that Hepburn initially asked Louis B. Mayer for Gable & Tracy, and was told by the mogul that she was off her gourd, since neither of them would ever agree to play second fiddle to a broad. It makes sense if she would have put in a bid for Heflin too; he originated the role of Macaulay Connor opposite Hepburn in the Broadway production of The Philadephia Story, and played it with her for over 400 performances. As a fun side note, the 1939 Broadway cast also featured Joseph Cotten as C.K. Dexter Haven and Shirley Booth as Liz Imbrie.

Van Heflin was one of my favorite
actors Ithink one of his best roles
was the father of Tab Hunter in
Gunmans Walk. The climatic scene when he sadly tells his other son
James Darren about the death of Ed
his oldest son. You could see real
tears in his eyes.I almost cried too. He was one super actor.

Van Heflin Is A Great Actor!