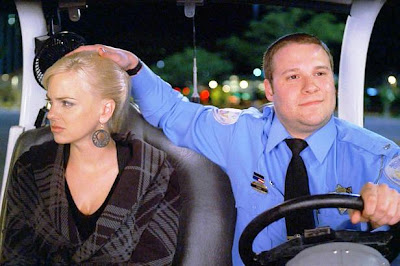 By Edward Copeland
"When I Paint My Masterpiece" is one of my favorite Bob Dylan songs, even if I prefer his version to the cover by The Band that opens Observe and Report. It's a strange musical choice to open the movie, but then almost every choice made in writer-director Jody Hill's film is an odd one.

When this Seth Rogen vehicle opened earlier this year, much was made of the scene where Rogen's character basically rapes an unconscious Anna Faris, but I'm not so sure why that scene leaped out as disturbing when most of the tone of the film up to that point has been disturbing. I think Hill set out to make a jet black comedy only most of the comedy got left out and what's left is a fractured, uneven tale that I imagine might resemble what a long 1970s-style Dick Cavett interview with Crispin Glover would look like.

Rogen stars as Ronnie Barnhardt, head of security at a suburban mall afflicted with a parking lot flasher. To say Ronnie is wound tight is an understatement. He views the mall as his kingdom, the cosmetics girl (Faris) as his secret love and his word as the law. While Rogen can be hysterical, he plays it straight and it's only late in the film that it explicitly spells out that Ronnie suffers from bipolar disorder. Prior to that, you think you're just watching an unfunny, dry spoof of Travis Bickle, but the way the film is made, it's not designed to laugh at Ronnie or to feel sympathy for him either.

Rogen gives such a fierce, committed performance as Ronnie that you wish he was in a better movie. In fact, all the actors seem adrift in their own separate movies that somehow have been poured together in some kitchen sink to form an alcoholic jungle juice concoction at a high school party being held while the parents are out of town.

Michael Pena gets some funny moments as another mall guard and seems to be in a subtler comedy. Celia Weston can unfurl her comic talents in her sleep and does it again as Rogen's boozy mom, but again she seems out of another film. Ray Liotta plays his role as a police detective hampered by Rogen's delusions pretty straight, almost as if he realizes Ronnie is a psycho and this shouldn't be a funny movie. Faris seems to be doing an amalgamation of many of her past roles.

While you can't say that anyone gives a bad performance, they are all hostage to a screenplay that just doesn't know what the hell it wants to be. Then, to make matters worse, it tries to slap somewhat of a happy ending on the whole mess, even if it is a happy ending tinged with anger. Someone should have observed this film much more closely as it was being made and report to people in charge that a disaster was at hand.