Houston, we have a problem

By Edward Copeland
Problem probably isn't the correct word to use here, but hey, I had to go for the play on the phrase since thanks to TCM I finally saw Robert Altman's Brewster McCloud. One word sticks in my brain after viewing his followup film to MASH: bizarre, bizarre, bizarre. It isn't unwatchable bizarre in the way Quintet is, but Brewster McCloud most decidedly spins a strange tale. It does though go a long way in explaining how Altman's reputation as an iconoclast got cast in cement in Hollywood. It took balls to follow up a critical and box office hit such as MASH with a loony lark like Brewster McCloud.

Bud Cort, who made his debut in MASH, stars as the title character, a young man who lives in a room inside the Houston Astrodome. We don't immediately know what his plan is, but we do know that people he comes in contact with keep turning up strangled to death, all marked mysteriously with bird shit. 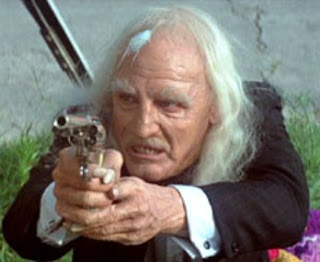 The film begins with, and is frequently interrupted by, another MASH cast member, Rene Auberjonois, as "The Lecturer," who tells us facts about the history of birds in addition to making strange bird noises and movements. MASH co-stars populate the film including Sally Kellerman as Brewster's friend and protector, Michael Murphy as a San Francisco police detective brought in to help with the murder investigation, John Schuck as a Houston patrolman and G. Wood as a Houston police captain. It also introduces us to future Altman regular Shelley Duvall, features Altman repertory player Bert Remsen, William Windom, Jennifer Salt, a young Stacy Keach hidden behind old age makeup and Margaret Hamilton who even gets to die wearing ruby red slippers. It's got a helluva ensemble for such a weird and wacky tale. It's pretty amazing that Altman already had earned so much faith from so many actors to get them to take a chance on a film whose plot couldn't be called half-baked on a good day.

The movie opens as if to make certain we know it's not to be taken seriously as Leo, the sturdy old MGM lion, fails to emit his usual roar but instead comes forth with Auberjonois' voice saying he doesn't know what the next line is. The next thing we know, we are on the field of the Astrodome where Hamilton is leading a chorus in The Star-Spangled Banner as the credits roll. Someone messes up, so Hamilton insists they start over, only not only does the chorus start over, so do the credits. There even is a credit reading "Title song by Francis Scott Key."

When we meet Brewster, radio reports already speculate about a previous murder as he drives a rich old man (the one played by Keach, who wasn't even 30 years old) under all that makeup) who is going around town terrorizing various people and collecting money from them. It's pure lunacy, but it is funny. When an accident spills the cash from Keach's hands and Cort tries to collect it, the old man pulls a gun and accuses him of trying to steal it. He drops it and as the wind blows the bills to and fro, we see the film's first dropping of bird shit as it strikes Keach's old man. It's the film's equivalent of the mark of death. It also reminded me of all those dog shit jokes nearly a quarter-century later in Ready to Wear, which may be a more conventional movie than Brewster McCloud but also a worse one and definitely a less interesting one. Coincidentally or not, both films contain murder mysteries that hardly seem to matter.

My favorite performance of the film belongs to Murphy as Lt. Shaft (before a more famous Shaft played by Richard Roundtree entered movie lore) as he investigates the murders. He works as the movie's straight man and it makes him all the funnier, especially since it's a mystery that neither the movie nor the characters in it seem particularly interested in solving. Still, Murphy treats it seriously, as if his duty compels him to solve the killings. He's even interested in identifying the type of bird the shit is coming from and if it's the same one.

Reviewing Brewster McCloud does not prove an easy task for a critic. It's not as if I fear spoilers, because there's nothing crucial to ruin since the movie charts such a strange course in which twists don't matter. It's just too odd to analyze. It's not a good movie. I don't think I'd ever want to watch it again, but yet I wouldn't want to discourage Altman completists from seeking it out. Unfortunately, that's difficult to do. Warner Archives has made the film available for DVD purchase, but not for rental. I'm lucky I caught it on TCM because I imagine my reaction would be harsher if I'd spent $30 for this film, sight unseen, just because I'd never had the chance to see it before. Warner really should make rental copies available of its library as well if they are making DVD copies to order.

If you get the chance and you love Altman, Brewster McCloud probably is worth watching, if only so you can say that you've seen it, but I'd think twice before buying it blindly unless you have lots of disposable income.

Comments:
Yes, it def. doesn't stand up to repeated viewings. It's not even easy as a single viewing. I've seen all of it, but I have to admit its very strangeness kept me going for about the first third before I realized that what didn't work was exceeding everything that was interesting. It's almost gimmicky.

Since I always had a "thing" for Jennifer Salt when she was on "Soap," I enjoyed her big scene. Also, I agree with you about Michael Murphy's performance. In fact, I think his final scene is the film's most touching moment--touching only because the camera respects his shame.

For the life of me, since I haven't seen it 15 years, I can't remember a single thing Bud Cort does in it.

I'm glad it's out on DVD--but considering it's such a "rentable" film it's a shame WB is selling it the way they are. If I paid $30 for that, I'd be annoyed. (Especially when MASH can be had for less.)

I remember the book, THE MAKING OF A MOVIE: BREWSTER MCCLOUD that came out at the time of its release, that was remarkably candid in the detailing of the goings on - stuff that wouldn't see the light of day today, such as Jordan Cronenworth's firing (due to not being quick enough for Altman), and basically making the film up as they went along, much to the chagrin of Doran William Cannon, who wrote the original script - which was also included in the book, along with the shooting script.