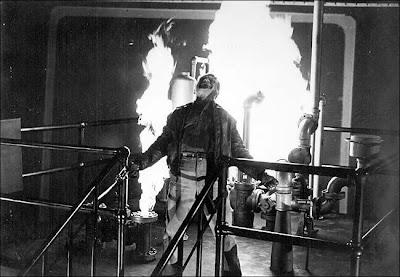 In “The Bells Toll at Noon,” a classic Hawaii Five-O outing from 1977, Rich Little portrays an impressionist (darn that typecasting!) who vows revenge on the individuals responsible for the death of a young girl from a drug overdose. His vengeance is meted out in the form of emulating death scenes from classic films; one victim (Milton Selzer) is even trussed up like a mummy like James Cagney at the conclusion of The Public Enemy (1931). The climax of the episode takes its cue from the fiery “blaze of glory” demise of another Cagney protagonist, Cody Jarrett, from the 1949 gangster classic White Heat (1949) — there’s even a choice moment when Steve McGarrett must view Heat on a movieola because he’s never seen the movie.

This was my introduction to what many Cagney devotees consider his finest hour onscreen. I didn’t see Heat until several years after the Five-O episode (at a time when you didn’t need channels like TCM or AMC to see classic movies), but the homage presented on the legendary crime drama has never left me…and continues to this very day, its 60th anniversary.

In White Heat, gangster Arthur “Cody” Jarrett (Cagney) successfully pulls off a $300,000 heist of Treasury money from a mail train even though a rookie named Zuckie (Ford Rainey) is scalded with third-degree burns after one of the engineers falls on the steam release lever, having been shot in cold blood by Jarrett. Holed up in a desolate mountain cabin, Jarrett takes advantage of an impending snowstorm to move his gang — including devoted mother (Margaret Wycherly) and slutty wife Verna (Virginia Mayo) — out of the area and towards freedom. Though he’s promised the injured man that he’ll get him medical attention, Jarrett orders an underling named “Cotton” (Wally Cassell) to terminate Zuckie with extreme prejudice—but the soft-hearted goon spares the “crispy critter” and in doing so, allows Treasury agents to find his fingerprints on a pack of cigarettes at the scene, effectively tying Jarrett’s gang to the robbery.

The T-Men close in on Jarrett at a trailer court in California, and after exchanging gunfire with Agent Philip Evans (John Archer), Cody successfully hides out at a drive-in movie theater, where he informs Ma and Verna that in order to beat the robbery rap he’ll cop to a lesser charge of a hotel robbery committed by a friend of his the same day the mail train was hit. The Treasury Department know Jarrett is full of it, but they arrange to work with the state of Illinois to keep Cody on ice and send special agent Hank Fallon (Edmond O’Brien) undercover to become Jarrett’s bunkmate; as Vic Pardo, Fallon’s assignment is to find out how Cody managed to launder the $300,000…and who’s doing his laundry.

Fallon has a close call or two while in the joint (he’s almost recognized by an ex-convict named “Bo” Creel [Ian MacDonald], who’d “know me in the dark”) but he’s able to gain Jarrett’s trust when Cody succumbs to one of his “episodes” (a splitting headache that, according to him, is “like a red-hot buzz saw going through my head”) and Fallon covers for him, massaging his temples in the same manner as Ma Jarrett. Cody takes Hank into his confidence and announces that he’s planning to “crash out” of the prison, and Fallon is able to relay this information to Evans and his men when he gets a visit from a “memory expert” posing as his wife.

Unfortunately, things do not quite go as smoothly as planned. Learning of his mother’s death, Jarrett goes berserk in the prison cafeteria and has to be restrained in a strait jacket; the governor then informs Evans that since Cody will be sent to a mental institution the plans for learning Jarrett’s methods and contact have been scotched. But Cody isn’t down for the count; he arranges a breakout anyway and takes Fallon and a couple of other inmates along for the ride. Once on the outside, Cody’s new gang mingles with his old one as the men make plans to rob the payroll office of a chemical plant by being smuggled in via a tanker truck,; a plan devised by Jarrett’s “laundryman,” known only to his associates as “Trader” (Fred Clark). Inside the plant, the truck’s driver — none other than the previously introduced Mr. Creel — recognizes Fallon as a T-man and an exchange of gunfire between the Jarrett gang and the feds ensues. Jarrett, by this time completely insane, ends up on top of a large gas tank and blows himself to kingdom come by randomly firing his gun, leading Fallon to philosophize: “He finally got to the top of the world... and it blew right up in his face.”

Of the 61 feature films that credit James Cagney with an appearance during his lengthy movie career, only a small percentage feature him as a gangster or gangster-type; Cagney wasn’t particularly fond of the genre — no actor likes being typecast — but it was hard to deny a grudging respect for those movies that made him a household name among theatergoers…particularly since Cagney was so damned good in them. His silver screen breakthrough occurred when he was cast in the lead role in the aforementioned The Public Enemy. After quarreling with Warner Bros. in 1936 and embarking on a two-picture sojourn with the newly formed Grand National he returned back to his stomping grounds for one of his biggest box-office (and gangster-themed) successes, Angels with Dirty Faces (1938). Four years later, having copped his only Best Actor Oscar for Yankee Doodle Dandy (1942), Cagney was afforded another opportunity to leave Warner’s stable of stars—but when his stint with independent production (partnered with brother William) produced duds like Johnny Come Lately (1943) and The Time of Your Life (1948), he returned again to the Warners’ fold…and his first smash success was, not surprisingly, White Heat.

When Heat first hit movie screens 60 years ago on this date, audiences were introduced to an older and paunchier Cagney — but by no means less effective. Cagney’s Cody Jarrett is every bit as ruthless (if not more so) than the characters he portrayed in Enemy, Angels and The Roaring Twenties (1939); he’s also more cunning, energetic, humorous and violent. But while the villains Cagney played in these '30s’ films were motivated largely by economic concerns (it was the height of the Depression, when times where tough and good jobs were hard to come by) Cody Jarrett’s primary driving force is that he is literally batshit-crazy. The subject of psychiatry was just getting a foothold in the movies at this time, and while the Jarrett character wasn’t the first seriously disturbed criminal (Chester Morris was having problems ten years earlier in Blind Alley) in the flickers, he was certainly the most unforgettable.

Jarrett’s insanity can be traced to what psychiatrists describe as an Oedipus complex; he lavishes affection on his doting mother, who in many ways is the root cause of his “episodes” (which some have attributed to migraines, others epileptic seizures) since the only explanation for those spasms are attributed by agent Evans as a series of psychosomatic attempts to get his mother’s intention (and that later became all too real). (Another explanation is that Jarrett’s insanity may be a hereditable condition; his father spent his final days in a mental institution as well.) Indeed, Ma Jarrett (who never blinks) is a real closet case, allowing her son to curl up in her lap as she helps him through another one of his “twinges” (I suspect the only reason this got past the censors was that the Jarrett character also had a wife).

The most memorable scene in Heat (its blazing conclusion not withstanding) is that moment when Cody, learning of his beloved Ma’s demise through the cafeteria grapevine, scrambles up on top of the tables and begins mewing and moaning in agony while various screws attempt to subdue him. Guards rush at him and he casually knocks them down like bowling pins until he is finally overcome by their greater numbers. If the extras at the beginning of all this look a bit surprised, it’s because they were — they didn’t expect Cagney to carry on in that fashion, the actor having received a stamp of approval from director Raoul Walsh to improvise after several approaches to the scene simply weren’t working.

Throughout the film, many of those in Cody’s employ remark about his instability (which kind of makes you wonder why they hooked up with him in the first place), particularly Big Ed (Steve Cochran), who appears to be biding his time, waiting for an opportunity to usurp Cody’s position on the throne. Ed gets his chance when Cody begins his prison vacation, but makes the fatal mistake of having tried to snuff out Jarrett while he was still in the joint; Cody gets his revenge by emptying his gun into Ed’s back at his hideout (Cody’s wife convinces him that Ed was responsible for his mom’s death—but Cody never learns that it was actually Verna who did the shooting) and cavalierly dispatching Ed’s lackey Parker (Paul Guilfoyle) by pumping more slugs into a car trunk that’s become Parker’s temporary residence. (I love how Cagney does this with all the nonchalance of a simple household chore, gnawing on a chicken leg in the process.) Jarrett gets crazier and crazier as the film rushes to its classic climax, until Cagney drives home the point of how much Jarrett is ready for the booby hatch when he’s surrounded at the end and remarks with a giggle to his man Ryley (Robert Osterloh): “They think they got Cody Jarrett…they haven’t got Cody Jarrett.”

Edmond O’Brien — known to readers at my blog Thrilling Days of Yesteryear as “the sweatiest man in noir” — handles an interesting and complex role as agent Fallon, who in many ways is presented by director Walsh as the real villain; a fellow convict who gains Cody’s trust and in the end is revealed to be an unrepentant fink (“A copper…a copper…how do you like that boys? A copper and his name is Fallon…and we went for it…I went for it…treated him like a kid brother…and I was gonna split fifty-fifty with a copper!”). Virginia Mayo — a favorite of Walsh’s — is equally top-notch; a dame struggling to act classy but unable to hide her trailer-trash origins (I love the bit where she spits out her gum before she kisses Cagney). It’s also hard to believe that the woman who plays Ma Jarrett is the same woman who played Gary Cooper’s sainted matriarch in Sergeant York (1941), but Wycherly’s performance is one for the ages.

Add to this a first-rate screenplay composed by scribes Ivan Goff and Ben Roberts (from a story by Virginia Kellogg), and that unforgettable score by Max Steiner, and it’s no wonder that this picture continues to hold audiences in its thrall 60 years after it was first shown at a theater near you. Toward the end, as the T-Men continue to air-condition Cody Jarrett with bullets, Fallon asks: “What’s holding him up?” All you have to do is sit down with Heat for the first — or even 31st — time and the answer will become all too clear.

Ivan G. Shreve, Jr. is responsible for the weblog Thrilling Days of Yesteryear, which doesn’t pay him a great deal but keeps him out of the pool halls. He had no trouble remembering the deadline for this essay as it is the same date as his natal anniversary.