“If there’s anything I can’t stand, it’s a perfect kid…and SIX of them…yecch!” 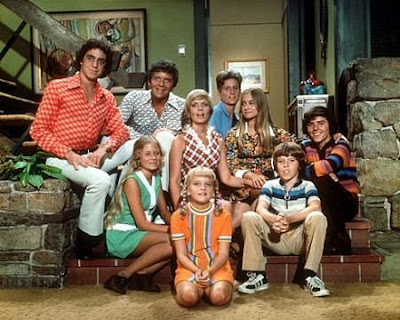 By Ivan G. Shreve, Jr.
Forty years ago on this date in 1969, ABC-TV premiered a brand new family situation comedy that was inspired by a 1965 Los Angeles Times article creator Sherwood Schwartz read noting that nearly 40 percent of marriages in the United States had at least one child (and sometimes more) from a previous union. Schwartz, a veteran comedy scribe who at the time was reaping the benefits of his comic creation Gilligan’s Island, devised a pilot (entitled Yours and Mine) about such a family and passed it around to all three of the major networks — who insisted that major changes be made to the show’s concept before agreeing to airing the series…something that didn’t set well with the notoriously stubborn Schwartz. He held onto the script, but with the success of Yours, Mine and Ours (1968) — a movie starring Henry Fonda and Lucille Ball as a pair of newlyweds with multiple kids — the American Broadcasting Company contacted Schwartz to let him know they were interested in a second look.

Till the one day when the lady met this fellow — and they knew that it was much more than a hunch. That this group would somehow form a family…that’s the way they all became The Brady Bunch.

The “blended” family concept was “daring” for its time (but by no means new — Make Room for Daddy predates Bunch by several years), though in retrospect it hardly seems so since the only thing about the show that seemed remotely risqué was that Mike (Robert Reed) and Carol Brady (Florence Henderson) slept in the same bed — and even they weren’t the first, despite what you may have read. Formulaic family-oriented comedies have dotted the television landscape ever since the early cathode ray tube days of The Adventures of Ozzie and Harriet — whose radio incarnation once employed Brady creator Schwartz among its writing staff. The family shows of the 1950s, 1960s and beyond possess a tremendous nostalgic appeal to those who vegetated in front of a TV set back then, and while many of the shows have dated horribly, they are still beloved for their “wholesomeness” by their original fans. At one time, I thought My Three Sons was the most “white bread” of these TV families — but the Douglas clan had nothing on the Bradys, who were so square their idea of balls-out entertainment was vanilla ice cream for dessert. (At least Ozzie & Harriet flirted with tutti frutti every now and then.)

Bunch was a simplistic show; a warm-and-fuzzy half-hour whose sugary-sweet themes still resonate today with families, “blended” or no. Self-esteem was a recurring topic in many of the episodes, usually involving the jealousy emanating from disgruntled middle child Jan (Eve Plumb) over her sister Marcia’s good looks and popularity (“Marcia, Marcia, Marcia!”). (My sister Kat, the middle sibling in my family, had a strong tendency to identify with Jan.) Relationships were another oft-dramatized subject; it seemed as if every week one of the kids was having boy or girl trouble — with the exception of Bobby (Mike Lookinland), who never seemed interested much in women…and when he did, he made out with some dame who later dropped the bombshell that she might have mono. (That’s about as daring as it got on Bunch — unless you consider the “controversial” episode where Carol was convinced that Greg [Barry Williams] was smoking cigarettes…Marlboros, naturally — not the other kind.)

During its five-year-run on ABC from 1969 to 1974, The Brady Bunch never managed to rank among the top 30 television shows each season — and yet the series was a huge success among young viewers for the network, anchoring a Friday night line-up that could very well be called the original “TGIF” alongside youth-oriented hits such as The Partridge Family, Nanny and the Professor and Room 222. Despite its many detractors, the series continues to flourish in syndication — and in fact, was awarded with a marathon this week on the retro repeats channel TV Land in celebration of its 40th anniversary. Its continuing success is attributed to the fact that because the series was a smash among teenage audiences at the time it aired, many of those individuals have taken their affection for the show and transferred it to their kids, creating a whole new generation of Brady devotees.

The critical reaction to Bunch was pretty much the same as the brickbats tossed at Sherwood Schwartz’s Gilligan’s Island — but Schwartz had the last laugh, and it was usually on his way to the bank. “I honestly think I could sit down and write a show tonight that the critics would love, and I know it would be cancelled within four weeks,” Schwartz once said in an interview, responding to the negative reaction awarded to both shows over the years. “I know what the critics love. [I] write and produce for people, not for critics.” If H.L. Mencken was right — that “nobody ever went broke underestimating the intelligence of the American public”—then Schwartz is truly deserving of the title “genius.” He was able to turn an unassuming series into a true pop-culture phenomenon: while the original series was on the air, a Saturday morning cartoon version (The Brady Kids) also ran concurrently (1972-74), which featured the voices of the kids in the cast. When The Partridge Family became successful with its series debut in the fall of 1970, Schwartz got the idea to put the Brady kids (often called The Brady Six) into the music business in several episodes, which led to a series of albums showcasing their (somewhat limited) talent. And after Brady’s cancellation, numerous Brady follow-ups continued in the show’s wake: The Brady Bunch Hour (1977; a series that featured the entire cast in a variety show — a new book on this series has just been published, co-authored by former Brady Susan “Cindy” Olsen), The Brady Brides (1981), The Bradys (1990) — not to mention two successful adaptations to the silver screen, The Brady Bunch Movie (1995) and A Very Brady Sequel (1986).

As a young kidlet, I devoured The Brady Bunch in both first-run episodes and reruns…and the jaded individual that I am today continues to convince himself it’s because I simply didn’t know any better. But I’m really only fooling myself; if I happen to come across a Bunch rerun I’ll watch it to the end of the half-hour because I’m thoroughly fascinated by the family — a clan who never had any of the real knock-down, drag-out squabbles or fights that constantly sprung up between my sisters and I but instead agreed at the end of each episode that it was all a “simple misunderstanding.” Oh, and one other burning question — if Mike Brady was such a super architect…why would he design a house that had only one bathroom for six kids?

Ivan G. Shreve, Jr. is solely responsible for Thrilling Days of Yesteryear, a nostalgia blog that covers many family comedy series like The Brady Bunch and his attempts to figure out why he spent so much time as a youth watching them. Though he considers himself a Brady fan, he must demur to his sister Debbie’s obsession with the show—she has been known to be able to describe the plot of any Brady episode within the first 20 seconds.

Comments:
You did leave out the TV movie The Brady Girls Get Married which was what led directly to The Brady Brides. I used to have a running joke with friends that David Lynch should remake the Bunch and in a twisted way, that almost was what The Bradys turned out to be with Bobby paralyzed while racing, troubled marriages, Marcia (and not even the real Marcia) becoming an alcoholic). On a personal note, I was actually at the King's Island amusement park in Ohio the day they filmed their episode there. I don't think I appear in any shots and I didn't meet any of the cast but I did get to watch them film part of the great blueprints in a poster tube relay.