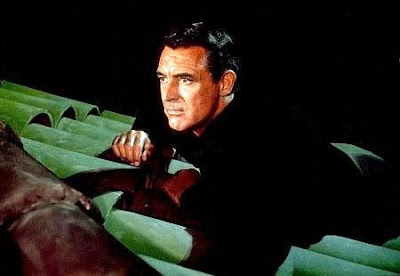 By Ali Arikan
Earlier this summer, as I was churning out retrospectives and reviews five at a time, I received an e-mail from a friend, an accomplished author and translator, who complimented me on a few of the pieces, and asked if I would be interested in looking back at Alfred Hitchcock’s To Catch a Thief, which he’d recently seen for the first time. Since most of the correspondence I receive concerns the various degrees in which I suck, I was flattered, and leaped at the opportunity: being commissioned to write a piece, by a fan, a friend, or an editor, is an infinitely more satisfying task — to consider, carry out, or accomplish — than a voluntary whim, which is how I usually end up with subject matter.

I pitched it to Edward, and we decided to run the piece on Aug. 5, the 55th anniversary of the film’s release. However, I failed to take into account three possible impedimenta, one foreseeable, the other two less so: I’d booked the first week of August off work, and, since I’m a firm adherent of Parkinson’s Law, I tend to file my work around 12 hours before it’s set to published, much to Edward’s chagrin. Last week, as my deadline approached and I tried to formulate from a nebulous hodgepodge of ideas a somewhat congruous set of notes, I got more and more stressed about the impending possibility of having to work on holiday, but eventually made uneasy peace with it. 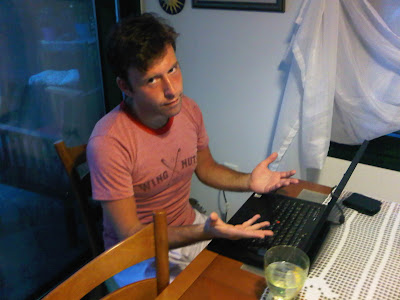 Still, I thought this but a small set-back to the planned acedia of my holidays. Having to write the piece on vacation would not, by itself, be disastrous: since my only access to the interwebz at my parents’ summer house is my Blackberry (which, as far as this Luddite understands, is unable to show YouTube videos), my efficiency would be much improved. But, as the saying, and the name of the most famous painting in my alma mater’s Picture Gallery, goes, man proposes, god disposes. In this case, I’d failed to take into account the precarious nature of Western capitalism, how the office drone is prone to major changes, caused by forces far beyond their control, even the thought of which wreaks havoc with not just my holidays, but also my concentration. However, these two problems were nothing compared to the final one: I’d never realized how terribly dull To Catch a Thief actually is.

One dreary Saturday 14 years ago during my second year at university, when most of my friends had gone back home for the weekend and the campus was as empty as my wallet, I took out a whole bunch of second-tier Hitchcock films from the library, and spent the weekend watching them in the screening room, a most enjoyable pity party of one. At the time, To Catch a Thief had turned out to be a breath of fresh air among such dreary work as Suspicion, Topaz and Rope. Seeing it in the condition I was last week certainly did not help matters, but, even objectively, To Catch a Thief, written by John Michael Hayes based on David Dodge’s novel, is slow and aimless, like a long walk along the waterfront in Cannes: fine weather, beautiful people, gorgeous scenery, but vacant, redundant and totally devoid of meaning.

Cary Grant plays John Robie, a retired cat burglar, forced to return to his noctivigant lifestyle, this time as a detective, when a copycat thief starts stealing from the wealthy denizens of the Riviera. Over-enunciating like 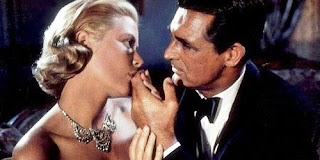 Audrey Hepburn in a stutter-fit, Grant chews the lush scenery, but still acts circles around Grace Kelly as the virginal ingénue, who is at once the subject of his affections and the audience’s suspicions (though a later single shot during the climactic rooftop chase untimely gives away the identity of the thief, mainly thanks to the law of economy of characters). The standouts, really, are John Williams as Hughson the insurance man (and Watson to Robie’s Holmes), and Jessie Royce Landis, as a nouveau riche widow, and Kelly’s mother. Unburdened with the unenviable task to lead such a frivolous film, the two actors let loose, and play broad caricatures, thus making them more sympathetic, and, dare I say it, realistic. As in many of Hitchcock’s lesser works, the supporting cast are much more fun than the leads (compare, for example, Landis with Florence Bates in Rebecca, and the two unconventional ways both ladies dispose of their cigarettes).

Of course, Hitchcock meant for the film to be lightweight. Sandwiched between the paranoid and metatextual Rear Window and the deceptively disturbing The Trouble with Harry, To Catch a Thief sees the director at 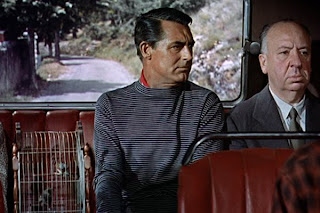 his frivolous best — this is his only film where he cameos as himself. It features a beautifully shot high-speed car chase on the Riviera that shamelessly doubles as a tourist video (the film’s single Oscar went to Robert Burks’ stylish cinematography). The infamous seduction scene, set under a verdant light, as the fireworks outside mirror the sexual desires of the two thieves, he of diamonds, she of his heart, is really rather magnificent, though I prefer the underrated Quiche Lorraine lunch between Grant and Williams. Hitchcock deftly weaves feline symbolism through the narrative, and the thief motif is accentuated during the many tits-a-tat between the two leads, but none of this coheres. To Catch a Thief works wonderfully as a kaleidoscopic view into a foregone era. It just doesn’t work as a film.

Comments:
I'll have to disagree with you on one point Ali. I love Rope.