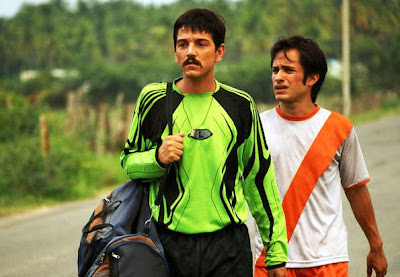 By Edward Copeland
When considering the powerhouse of Mexican filmmaking talent behind Rudo y Cursi, it's a bit of a disappointment that the end result is just a slight, watchable, predictable movie. Directed and written by Carlos Cuaron, the co-writer of Y Tu Mama Tambien, and produced by his older brother Alfonso, Guillermo del Toro and Alejandro Gonzalez Inarritu, Rudo y Cursi reunites Gael Garcia Bernal and Diego Luna as working class half-brothers who find themselves thrust into the fame and fortune of the Mexican soccer world.

The brothers play the sport for fun while working on the same banana plantation. Beto (Luna) is married with children and has long lived for the game, but he's angry with his lot in life, which isn't helped by his love of gambling and his bad luck at it.

Tato (Bernal) is a sweet-natured lad infatuated with legends of his French father, longing to follow in his supposed footsteps as a singer.

When a slick talent scout named Baton (Guillermo Francella) stumbles upon the brothers' soccer game, he offers them a chance at professional soccer, though he can only offer one a shot at the time. Decided by a penalty kick, Tato wins the chance (though he views it only as a stepping stone to musical stardom).

While most of Rudo y Cursi plays light and amiably, you know that with Tato's singing desire and romance with a golddigging TV celebrity (Jessica Mas) and Rudo's gambling problem certain to metastasize on a grand scale, what goes up will inevitably come down.

In fact, with as many uncertainties hanging on the climax, you'd think there would be a certain amount of suspense as to the outcome by the sheer number of possibilities, yet it still ends up being predictable. It's really the performers who save the film at all.

Bernal is engaging and Luna injects his role with the right mix of gravity and levity. Still, the most entertaining standout turns out to be Francella, who also serves as narrator of the forgettable film.

Comments:
I enjoy Bernal a lot and really hope he hasn't "peaked."

His performance in Motorcycle Diaries and Amorres Perros are still top notch -- but I hope he has strong performances in strong films.