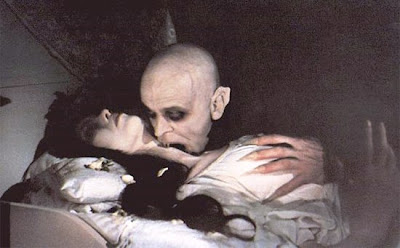 By Edward Copeland
In a featurette on the DVD for Nosferatu, Werner Herzog says that it was the first time he attempted a pure genre film and boy did he pull it off. He also felt some responsibility, remaking what he considers the first great German film something that, in actuality, he did twice, making both English-language and German-language versions (on the commentary, Herzog prefers the term reversioning). I only watched the German version and it may well be the best screen telling of the Dracula story I've seen put on celluloid.

Of course, the reason Herzog made two versions was the international nature of his cast and as a result many of the actor's voices were dubbed by others in both versions. The great French actress Isabelle Adjani plays Lucy Harker, but since she spoke neither English nor German, another actress voiced her part in both versions.

The same was true of the Frenchman Roland Topor who plays Renfield, though the dubbed cackle would make Dwight Frye proud even though Herzog claims never to have seen the Bela Lugosi version. Klaus Kinski as Dracula and Bruno Ganz as Jonathan Harker could do their own voices in both versions.

Herzog, as a German child born during World War II, felt that there was no German forefathers in his immediate generation to look back to, so he and other aspiring filmmakers went back to their cinematic grandfathers like Murnau who made the silent Nosferatu in an effort to find their way to connect to German culture that didn't involve the horrors of Nazism.

Kinski's makeup, which took four hours a day, is patterned after the look Max Schreck had in the silent classic and his subdued performance boosts the creepy element that Herzog builds. What's particularly amazing for a vampire film is how much is not shown. Only a single drop of blood appears on screen throughout the entire film, yet it doesn't do anything to lessen the horror, though I'm not sure horror is the proper word.

There aren't scares as in your typical vampire story; Herzog's film concentrates on moods and atmospherics and really succeeds better than other movies that take the easier paths to spooking the audience. Kinski's Dracula contains a bit of a tragic figure within his horrific monster body, longing for the ability for human emotions such as love or even the desire just to die.

All the classic characters get a bit of a twist. Ganz's Jonathan Harker starts out as the would-be hero, out to save his wife before becoming a zombified figure shaking in a corner. Walter Landegast's Van Helsing isn't the fearsome vampire hunter of some versions, but just your average doctor who believes in science and pooh-poohs the superstition when Adjani's Lucy tries to warn him of the vampire in their midst.

Lucy changes the most. It's somewhat ironic that this version premiered in 1979, the same year that Sigourney Weaver first became Ripley in Alien, because Lucy is the character that pretty much takes charge when it comes to trying to stop Dracula.

Now, she doesn't do some Ripley-style asskicking, but it is an interesting take, especially within her village, which has been hit by the plague and provides some unusual sequences where Lucy tries to enlist help only to find the living citizens drinking and celebrating what they assume will be their last dances.

As I've dived into Herzog for this week's project, I've found his body of work to be more eclectic than you'd think while still showing some of his signatures within the different films. Of all those I've viewed, Nosferatu may be my favorite Herzog so far.