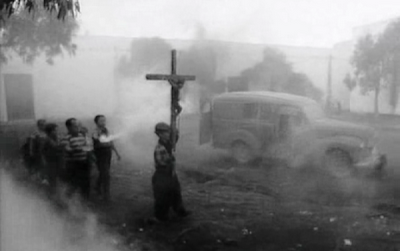 By Edward Copeland
Of all the Herzog films I watched in preparation for this week, Even Dwarfs Started Small is the only film I came close to not finishing because it's just that damn odd.

You know you're in for something way off the beaten path when the DVD commentary contains (as do most Herzog films) not only Herzog and Norman Hill but professional eccentric Crispin Glover, who was reportedly so influenced by this disturbing mess that he planned to film his own homage to it.

I don't know if Glover got around to it, but if he did, don't tell me about it. In some case, ignorance truly is bliss. While the film is unique for using a cast entirely of little people, it's nothing more than a collection of bizarre and disturbing images.

Though it's about 95 minutes long, it took me a long time to finish because it's weirdness eventually took on an element of mundaneness that would not hold my interest. There is no plot to speak of and even less in the way of character.

My best guess is that it's a story of what happens when the inmates run the asylum, but are they inmates? It's unclear whether the dwarfs are students, inmates or patients of an institution, but they clearly are leading a rebellion when one of their own seem to be arrested for wrongdoing.

As they trap the institution's supervisor inside, they go about mutilating animals, staging mock weddings, setting fires, hotwiring cars so they can run in endless circles and crucifying a monkey. They also giggle and cackle. Boy, do they giggle and cackle.

Herzog says on the commentary that following a prize he won for his first feature, the very good Signs of Life, he was plagued by nightmares and Even Dwarfs Started Small sprang from that. He also said the he was influenced by Tod Browning's classic 1932 film Freaks, but he missed the great lessons of that film. Freaks created real characters you cared about from its sideshow attractions as well as a story that carried the film from beginning to end.

Even Dwarfs Started Small has none of that and is by far the worst Werner Herzog film I've ever seen. Of course, because it was made by a major filmmaker such as Herzog and is ambiguous about what the hell it is about, it's one of those films that many will defend with the usual: "I don't get it. It must be genius" instead of accepting the simpler truth: it was Herzog's third feature and it was a mess made by a self-taught filmmaker in his 20s experimenting and failing in the process.

Just because he made a spectacularly strange dud doesn't distract from the great works he would go on to make. This is weirdness for the sake of weirdness.

Comments:
Edward, I'm afraid you may have missed the boat on this great film. To call it mundane and a mess is to ignore the existential horror at it core. Ben Livant and I had some fun dissecting this film awhile back. I call it equal parts Beckett and Kafka, while Ben tags it Heironymous Bosch meets Salvador Dali by way of Lord of the Flies.

Here's a link to our discussion:

Can't go with you on this one. I've got to have something more than bizarre images to hold my interest. It's what separates a Mulholland Drive (which I love) from an INLAND EMPIRE (which bored me to tears). You don't have to have a story or a narrative to make a great film, but you better have something really spectacular to make up for it and for me DWARFS offered nothing.

Did you read our discussion, Edward? I think we both make a pretty compelling argument for this being a film about a lot more than random images. It is suffused with Herzog's existential angst, and is absolutely rivetting when put in that context.

Ed, Ben Livant here. I'm glad you got around to looking at Dwarves. I am scheduled to look at it again in a few weeks. That will be my second time. I am curious to know if I feel the same way about it as I did a couple of years ago. For now, let me just say that I think the historical location of the film in Herzog's career is of no consequence. Indeed, the film should be experienced in its own right. No doubt, it is extreme in the extreme, so to speak, entering into the outer-surrealist territory of Dadaism. Nobody is comfortable with a steady diet of this sort of stuff, but at the same time the occasional journey into the frayed fringes of the mind strikes me as not only tolerable but necessary and even illuminating. In short, Dwarves takes us out of the comfort zone and I reckon the way it does so has some artistic merit. Cheers.

Still, they are Herzog's nightmares and it's like the old rule goes: No one wants to hear you tell you about the dream you had last night. It just bored me after awhile and that's usually my purest critical take. Of course, it's all subjective. You are just as right as I am. Of all the Herzog films I've been watching, if I reached for one to watch a second time this would be the very last choice.

Edward, I guess it would be helpful to the discussion if you gave us some indication of what it is that is lacking in the argument Ben and I make on behalf of the film in our discussion of it.

There's nothing wrong with your arguments. There just isn't any argument that will suddenly change someone's mind into thinking they weren't bored or that his time wasn't wasted. You can make all sorts of cases about Herzog's intentions and I probably agree with you but that won't me I'll end up liking the film. It's the curse of the critic: once we've made our minds up, it's damn hard to get someone else to change them (either you and Ben changing mine or me changing yours) and that's why it's all opinion anyway. I'm just in the anti-DWARF camp. However, we both really liked STROSZEK.

Ed, I am going to indulge my vanity and assume that not only Dan but also I am just as right as you are. Thank you for that. I can't help worrying, though, if you are not right, does that make me just as wrong as you?

Of course, I'm being cheeky. But not without intent. Somewhere between the Kantian quest for laws of aesthetic judgment and the notion that there's no accounting for taste, it is sometimes possible to achieve a "better" engagement with a work of art through the ebb and flow of debate and consensus.

I recall a few years back, Jardine did a "Five For The Day" over at The House Next Door that featured films about which he had changed his mind. The column generated alot of anecdotes about epiphanies the second-time round. I certainly have revised my position about a film or two over the years and I trust you have as well.

This is to caution in general against any sort of notion about the "purest" of critical takes and challenge in particular your standard of boredom as the most reliable indicator of junk. Indeed, I would go so far as to suggest that often boredom is a sign of an unwillingness or an inability to have a particular experience.

I wouldn't equate boredom with junk. As much as DWARFS bored me, I wouldn't call it junk in the way I would call something such as BIO-DOME junk, but BIO-DOME didn't bore me, it just repulsed me with its awfulness. As for re-evaluating, that has certainly happened to me, but it always has happened naturally and over long periods of time. I can't recall a single time where someone talked me into liking something I didn't or a review turned me around on something. Sometimes, movies I didn't like at first, a long time down the road by chance I catch again and re-evaluate. I think the biggest switches I can think of is Warren Beatty's REDS, which bored me to tears but which I eventually liked, but that took more than 20 years to happen. Since I just watched DWARFS a week ago, it's a bit much to expect me to turn on a dime that fast when it took me so long to even get through it the first time.

Ed, my previous comments were not meant to change your mind about Dwarves. Rather, they were meant to find out what is really on your mind about the film. I used the word "junk" to signify your assessment of Dwarves and you have corrected this error on my part. Yet, I am confused by you informing me that you can be repulsed by the awfulness of what you do consider junk while something you call a "mess" leaves you nothing but bored.

I hope you can forgive my ad hominem attention but I feel compelled to speculate further on this professed boredom of yours. You have said more than once now that it was a struggle for you to sit through the film from start to finish. Well, join the club man. I felt exactly the same way. Because guess what - I was repulsed by the awfulness of it! (Haven't seen BIO-DOME but you lead me to believe that it would be boring for me.)

Dwarves is not easy to watch. It's very upsetting while the reels are rolling and still upsetting when the lights come on. You say the film is "weirdness for the sake of weirdness" but to be blunt, I reckon the most significant descriptor you use is "disturbing." You also speak of the film as "ambiguous" and no doubt it is with respect to the conventions of story-telling. But at the same time, the weirdness of Dwarves is not at all ambiguous. It is flat-out disturbing. I believe it is worthwhile to enter into this while as you appear to have dismissed it out of hand.

Another way to approach this, even if the film is a mess, what is it that's messed up?

As I said, while at times early on, it's disturbing, after awhile the weirdness for weirdness's sake just started to bored me by its repetitiveness. Even if the scenes were different, it always was strange in the same way without building toward something. I'd say it's a mess more in the way a young bachelor's apartment's might be a mess if he hadn't cleaned up and straightened it for awhile, especially if he knows that company is coming over to see it. As for BIO-DOME, while I don't know your overall tastes well, I bet if you were bored by it, you'd give up on it within about 15 minutes, which I wish I could have done, but I was unfortunately unable to do that as I was reviewing for a paper. Under any circumstances, spare yourself: life's too short to sit through BIO-DOME if you don't have to unless you have a burning desire to see Stephen Baldwin chewing off Pauly Shore's toenails.

Ed, thank you for being a gracious host. I would be a (completely) graceless guest if I challenged you further. My concluding purpose here is rather to advance my own thinking about Dwarves.

I said that Dwarves is "flat-out disturbing." While it is certainly disturbing from start to finish, that is not all it is. There are sporadic passages of compelling humour and even genuine compassion that run counterpoint with the ongoing din of disturbance.

I have been helped to see this by the essay on Dwarves at the site Inadequate Imagery, which I cite directly in my recent reconsideration of the film at Cinemania.