"The most unusual MGM movie ever" 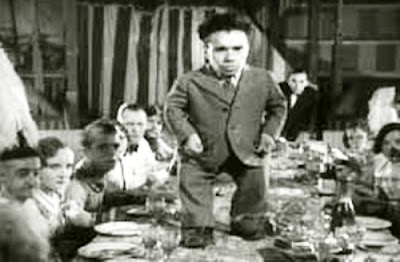 By Edward Copeland
That's how Robert Osborne introduced a recent airing of Tod Browning's 1932 film Freaks on Turner Classic Movies. The cult classic from the director of Bela Lugosi's 1931 Dracula was released 75 years ago today. 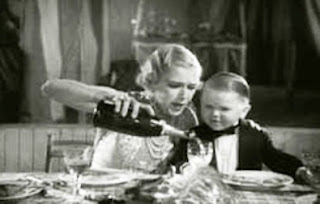 Even three-quarters of a century later, Freaks is a difficult film to describe and its appeal is even harder to sell to those who only hear the plot synopsis and might expect nothing more than a truly sick exploitation film better suited as gross-out attractions in state fairs of days past. That's OK, you're just not one of us, one of us, one of us. Simply put, the title just about says it all — emphasized when a hand violently rips through the movie's title card at the outset. Set in a circus sideshow, Freaks focuses on the lives of the "deformed" and "nature's oddities," though really the biggest freak in the movie is a "normal" human. Cleopatra (Olga Baclanova), an acrobat described as the "peacock of the air," who enjoys teasing the lovesick little person Hans (Harry Earles), especially once she learns he's an heir to a sizable estate. Cleo sets out to trick him into marriage in hopes of stealing his fortune. 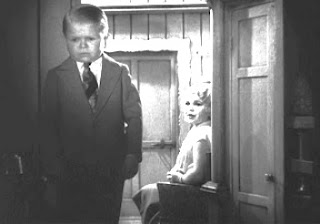 Hans can't seen through her, but the little woman who loves him, Frieda (Daisy Earles), certainly can as do the other members of the sideshow attractions, who eventually set out to inflict a more sinister Revenge of the Nerds-style revenge on the acrobat. Frieda's motivation is love of Hans and the other freaks, while concerned about Hans, really want to teach Cleo a lesson, especially after watching how she mocks them all during a segment that even gets its own title card: The Wedding Feast. What's amazing about the film is that, even after 75 years, it retains a lot of power that goes beyond the morbid fascination one would expect. Sure, there are throwaway gags based on the people's conditions, such as an armless woman sipping wine with her foot. Then there are other touches such as when the real-life Siamese twins, the Hilton sisters, play off their ability to react to the other's senses. (Violet makes out and we see Daisy react). For those unfamiliar with the Hilton sisters, they not only appeared in this cult classic but inspired a modern Broadway cult classic of their own with the 1997 musical Side Show with a strong score featuring music by Bill Russell and lyrics by Henry Krieger, who has three Oscar nominations for best song this year for his new contributions to the film version of Dreamgirls. Tod Browning even appears briefly as a character in the musical. Side Show earned four Tony nominations, including a rare dual nomination for Alice Ripley and Emily Skinner who played Violet and Daisy. Alas, Side Show went home empty-handed, losing book and score to the inferior Ragtime and musical to the empty spectacle of The Lion King, though it's hard to argue that Ripley and Skinner should have beaten the magnificent Natasha Richardson in the revival of Cabaret.

As for Freaks the movie, it seemed even more powerful upon rewatching it recently than it did when I first saw it years ago. Browning creates a truly unique atmosphere and builds genuine creepy suspense as the freaks chase Cleopatra, crawling slowly through the mud on whatever limbs remain. It's funny, as Osborne told it, to know that MGM was so ashamed of Freaks at the time, it let its rights to the film slip away and removed Leo the Lion but, once people rediscovered it years later and it was reassessed more thoughtfully, MGM jumped at the chance to reacquire the rights and put their logo back on the film where it began and belonged.

Comments:
I am so glad that someone else out there likes SIDE SHOW (although as a huge RAGTIME fan, I beg to argue its many merits) Just this past week, I was at a birthday party and my dining companion was telling me all about a book she had just finished, THE LIVES AND LOVES OF DAISY AND VIOLET HILTON. This gave me an opportunity to sing the praises of SIDE SHOW once more.
As for FREAKS, I still can't watch it.

The strange thing is, I bought a copy of Freaks on Region 2 DVD because it was cheaper than the Region 1 version.

It still packs a hell of a wallop, that's for certain.

Gabba Gabba Hey! He's one of us!

The Living Torso -- one of my alltime favorite characters! Watching him crawl through the mud with a knife in his mouth is the creepiest part for me.

I loved Browning's decision to show very little of their actual acts -- mostly confining the story to behind the bigtop.