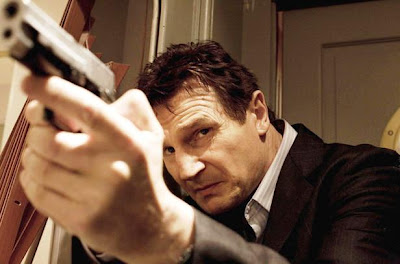 By Edward Copeland
For some reason in the past few years, comedies keep getting longer. Most of the best ones are usually never much longer than 90 minutes, but they've been stretching that clock. So I was surprised when I rented the thriller Taken, figuring it would be closer to the usual 2 hour or 2 hour plus range, to see that it only came in at an hour and a half. I hoped that perhaps this foretold a taut tale to come but while the film unspooled quickly, not much of an impression was left behind.

Liam Neeson is fine as a former CIA agent whose experience in the agency has made him a bit of an overprotective father, especially after a bitter divorce. When he reluctantly agrees to allow his daughter and her friend to go on a trip to Paris, he happens to overhear their abduction and soon he's back into superagent mode to get his daughter back.

Some of the action scenes composed by director Pierre Morel are nice, but they all seem to run together and Neeson seems to put together what's happened to his daughter far too easily. Wouldn't he ever stumble upon a false lead or go down a road that leads nowhere? I guess that's a little hard to cover in 90 minutes.

In its own none-too-subtle way, Taken also seems to be made by a P.R. firm working for Dick Cheney, showing the efficacy of getting accurate information out of torture. Now, I'd be lying if I didn't admit that there is part of me (and probably part of a lot more people than would like to admit it too) that enjoys the vicarious thrill of beating the shit out of people who have harmed your loved ones, but that alone does not a movie make.

It also seems so determined to get to its final destination that some essentials get lost in the shuffle (Don't blink or you'll miss the fate of Neeson's daughter's traveling companion, not that anyone seems too worried about her).

By the time they get to the inevitable ending, I almost expected one of those fake freeze frame laugh endings they used to have at the end of Police Squad.

There's a reason films such as Taken get released early in a new year where they'll soon be forgotten.