Stupidity is not a victimless crime 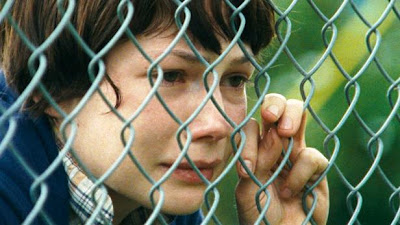 By Edward Copeland
Dramas built around underdeveloped, selfish, thoughtless and stupid people can be among the most frustrating films to endure and, even with its mercifully short running time, last year's Wendy and Lucy certainly proves unbearable to watch.

Having recently lost my beloved dog, I was hesitant to watch the film in the first place, fearful that something bad would happen to the animal. Much to my surprise, the film didn't elicit a lot of sadness, but it did get me angry at Lucy's owner Wendy (Michelle Williams), a one-note character that the screenplay by director Kelly Reichardt and Jonathan Raymond places before us as if Wendy's a frozen dinner that they forgot to cook in a microwave.

Wendy's motivations, if she has any, remain hidden beneath layers of sulk. One brief scene where she calls her sister and brother in-law seems to indicate the in-law is glad to hear from her but the sister assumes she's after more money. I'm sure the movie wants us to sympathize with Wendy against the hard-ass sister but based on what we've seen, I can see how a relative who has put up with her shit would assume the worst and be on to her game since the last she'd heard she was taking her poor dog, hopping into a down-on-its-luck car and driving to Alaska for some sort of job.

Williams can be a good actress, but she gets nothing here. Wendy has saved a bunch of money and she and her dog Lucy travel toward a job in Alaska, only her car breaks down (despite early warnings she ignored). I couldn't help but be reminded of the superior (on every level) Into the Wild, where another young person heads off toward Alaska and even though he seemed to have even less specific aims than Wendy, Emile Hirsch's character functioned with direction, intelligence and a distinct lack of poutiness. He also didn't make another living creature suffer alongside him.

You really see no evidence that she really even loves the dog. She barely has any food for her left in the trunk, so she goes to a store to get some more food. We know she has a wad of cash, but she chooses to shoplift a single can of Iams instead and she gets caught. There seems to be no planning to anything Wendy does. The store employer who catches her tells her that if she can't afford dog food, she doesn't deserve a dog and that's true, except SHE CAN afford it.

While Wendy visits the local police (she's quick to pay her own fine), Lucy disappears and she worries about where she has gone. At least I guess she's sort of worried. You get very little from Williams' performance.

Wendy and Lucy is one of those films that some embrace as being better and more profound than it really is. If they make another version of those sad Sarah McLachlan ASPCA ads, they should include clips from this movie as an example of animal abuse.

While they're at it, maybe someone needs to form the Society for the Prevention of Cruelty to Movie Lovers.

Comments:
I saw this recently too, and while I may give the movie -- or at least Williams -- a little more credit than you, it is quite an irritating film. Mainly because, as you pointed out, Wendy's motivations don't track: Why does she shoplift if, as the director took pains to point out to us, she can afford the food? It's possible to create an interesting character study out of contradictory behavior, and I think Williams does have more of a bead on the character than the filmmakers do; but Reichardt is too busy stacking the deck against her heroine to bother doing her justice. The reaction of the store manager -- bullied by his overzealous teen employee -- was bullshit; even worse was the kind-hearted security guard next door shoving a wad of cash into Wendy's hands, only to have it turn out to be six bucks. Whatever point Reichardt is trying to make with that scene, it's a puny one. Your comparison to "Into the Wild," where the protagonist meets a whole gallery of interesting and distinctive individuals, is well-taken. Yeah, this movie stinks.