Doing wrong for the right reasons 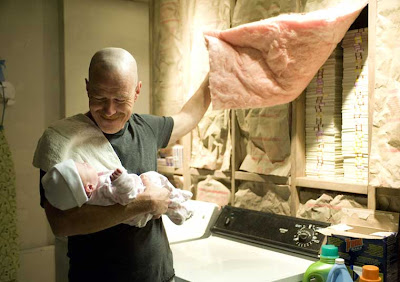 By Edward Copeland
I came late to Breaking Bad, catching up with the first season on DVD and the second season in reruns on AMC. I proved similarly tardy with Mad Men, seeing the first two seasons on DVD and watching season three now as it airs following the new episodes of Breaking Bad.

Both shows exemplify quality television, but in my mind, only one of them truly qualifies as great. Though I've wanted to write about Breaking Bad for quite some time, I couldn't bring myself to do it, partly out of selfishness of wanting to keep the show for myself and its band of devotees, and partly out of not wanting to ruin anything for those who come to the series late as I did. I'm even regretting the main photo I chose for this piece, but oh well.

AMC probably would have been about the last place to expect quality original programming to spring up, given how that channel destroyed its own once pristine image as a place for classic films when the AMC was shorthand for American Movie Classics. Their existence preceded Turner Classic Movies, but eventually they pretty much abandoned their commitment to movie buffs. Widescreen movies routinely got cropped, commercials interrupted films, edits muddled content and the channel abandoned the classics label to air anything from a great film to Short Circuit.

Needless to say, even when the critical hosannas hit for their series, I took them with a grain of salt, given how the channel destroyed its own legacy, a mistake on my part, because my cultural universe would be that much poorer if I'd never dived into the world of Walter White and Breaking Bad which, in my opinion, is the best dramatic series currently on television.

It's a minor miracle that the Emmys, which as a practice seem to get things wrong on purpose, gave Bryan Cranston outstanding actor in a drama for both of the first two seasons of Breaking Bad. They didn't give the second season best series, but they must uphold their reputation for being wrongheaded. Those who only know Cranston as the frazzled father on Malcolm in the Middle will be amazed to watch his masterful work as Walter White, a high school chemistry teacher whose diagnosis of terminal cancer prompts him into the meth-making business to leave his family (a pregnant wife and a teenage son with cerebral palsy) a nice nest egg. It's funny seeing reruns of Malcolm now in the wake of Breaking Bad and, if it hasn't already been done and even though the two characters couldn't be more different, I imagine a very funny mash-up could be created intertwining scenes of Cranston from the two series and finding some similarities. Life is unfair. However, Cranston truly works wonders as White as you watch his transformation from meek mouse to angry control freak, capable of anything. You know this man has nursed grudges for years and while the cancer gave him the motive for turning to crime, it also allowed him to uncork his bottled rage. Walter has lived with perceived and actual slights all his life and now, with his family's future at stake and a death sentence hanging over his head, all bets are off. 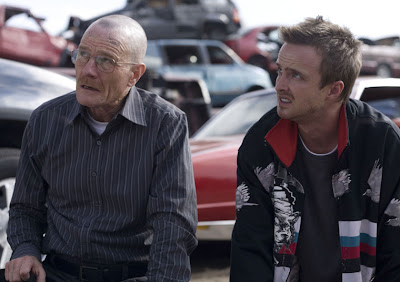 While Cranston earns, deservedly, most of the series' accolades, the rest of the cast really has stepped up their game as the show has gone on and evolved, especially Aaron Paul as Jesse, Walter's former student and minor-league meth merchant who becomes Walt's partner-in-crime, Anna Gunn (best known as Seth's wife on Deadwood) as Walt's wife and Dean Norris as Walt's DEA agent brother-in-law Hank, who began the series as a buffoon but has grown increasingly complex and interesting as time has rolled on. Paul managed to land an Emmy nomination for the second season, quite deservedly. Cranston wouldn't be as great as he is without Paul to play off of and though they've pretty much been segregated so far in the third season, that's only grown more true as the series has moved forward. Walt

still lives in a land of denial, refusing to accept the harm that he's caused by his actions because the ends still justify the means in his mind. On the other hand, Jesse, who began the series as a somewhat dimwitted, irresponsible young criminal, has grown more assured as he has faced the tragedies that have spun out directly and indirectly from his actions, but so far he seems emotionally turned off from the guilt and doesn't deny: He accepts that he's a bad guy and isn't seeking redemption, at least not yet, though he's almost the series' moral arbiter at this point. He'll crack you up one minute, break your heart the next. 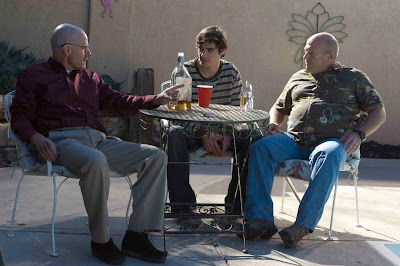 I hope more of the talented cast gets recognized by the Emmys next time, especially with the addition to the regular lineup in the third season of the hysterical Bob Odenkirk (of Mr. Show fame and the memorably slimy agent Stevie Grant on The Larry Sanders Show) as criminal (emphasis on crime) lawyer Saul, Giancarlo Esposito as meth kingpin/fast food entrepreneur Gus Fring and the gifted Jonathan Banks, who has been great for a long time, as a problem solver whose loyalties remain unclear at this point in the series. So far in the first three episodes of the third season, Gunn has been given her best material yet after learning of Walt's extracurricular activities and kicking him out and even taking a turn toward the bad side herself. Norris also is getting back to dealing with the post-traumatic stress he's suffered from previous dealings related to his job that contradict the fun-loving guy image Hank tries to put forward. I keep waiting for Betsy Brandt as Skyler's sister Marie, Hank's wife, to get more material. Her kleptomaniac side must come back at some point I imagine.

Vince Gilligan, the mind who created this wonderful series, previously worked as an executive producer and writer on The X-Files, including penning some of the best episodes such as "Memento Mori," "Dreamland," 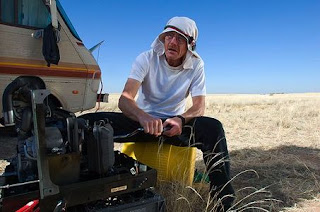 "The Unusual Suspects" and "Small Potatoes." Still, nothing on that classic series could prepare for Breaking Bad, which really doesn't have a precedent on series television. Given the premise and storylines, you wonder how long it can go on and Gilligan has been upfront about saying he can't imagine much more than four seasons. I think that's a good thing and I hope he lives up to it. If this blog (and myself) are both here when it wraps up, perhaps I'll feel more comfortable about writing in more detail. More series should plan an end instead of overstaying their welcome. As much as I loved The Sopranos, I think they talked David Chase into stretching it out beyond reason, allowing for some slow patches. On the other hand, David Milch should have been able to complete his five-season plan for Deadwood. If you haven't watched Breaking Bad, don't start with the episodes airing now. Go watch the first two seasons on DVD. It's worth it.

Comments:
I'm looking forward to catching up with this show. It's soon to arrive from my queue. I have to always be watching some type of television series, and after finishing all five seasons of "The Unit", "Breaking Bad" is next.

It will be well worth your time and season 1 is short because the writers' strike at the time left it truncated.

I as well am coming late to BB. It's a good show from what I've seen so far. What really makes me happy, is that fact that some of these networks (amc, fox, usa, etc) are getting some brass to put shows on that go against the normal good guy/bad guy standard, blurring the lines. You won't see shows like this on abc, nbc or cbs.

Great article that sums it up. I too am a late comer to the series - I have yet one episode left until I am fully caught up. I agree also with 4 seasons.

I'd hate to see this show get boring and stupid. Depending on what happens in the Season 3's last episode (no spilling beans anywhere) and then subsequent season 4, I guess unless they "expand" it will be much of the same stuff. Gotta say, I agree completely with you peripheral cast emmy possibilities. Especially Giancarlo Esposito. Looking back at other roles this guy has played - how freaking good is he on this show? One senses there may be that one time, just once, where he finally loses it. But that's what makes him great. Jon Banks, Hank, Skyler - all great. When I start a show, I want Vince Gilligan's casting director.