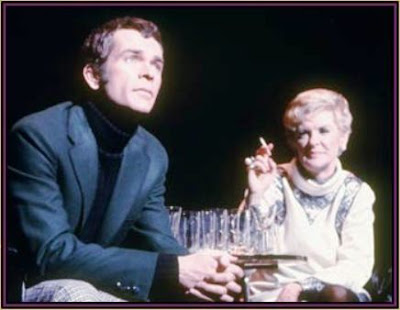 By Edward Copeland
On this date in 1970, the Broadway legend of Stephen Sondheim really began to be cemented as Company, the first musical that teamed Sondheim as both lyricist and composer with Hal Prince as director (though Prince had previously produced Sondheim's A Funny Thing Happened on the Way to the Forum) opened on the Great White Way.

Granted, Sondheim already was well respected for his lyrics for West Side Story and Gypsy as well as for serving as lyricist and composer for Forum, Company's look at an active bachelor named Robert (or Bobby) surrounded by the relationships of his married friends was a bit of a groundbreaker in terms of subject matter for a big Broadway musical. Some later versions even hint at his bisexuality, though he is strictly a heterosexual lothario in the show. It also began an incredible run for the Sondheim-Prince team in the 1970s. The following season brought Follies and two seasons after that A Little Night Music premiered.

As is sadly too often the case with Sondheim musicals, the score for Company proves much stronger than the show itself. In fact, the show's book by George Furth really has no plot and is more a series of skits. Still, the original production earned 14 Tony nominations and won six, including one for Furth's book.

I've personally only seen two productions of the show live: the 1995 Roundabout revival starring Boyd Gaines and a local production in Daytona Beach, Fla. Our own Josh R., not a big fan of the show, did think that John Doyle's radical rethinking of the musical in Doyle's 2006 revival made him see the show in ways he'd never imagined before. "From this point on, I don’t think I’ll ever be able to be blasé about Company again, or regard it with anything close to indifference," Josh wrote in his review.

Fortunately, Doyle's production was filmed and is available on DVD and I was able to see it that way and I wholeheartedly concur. Company isn't near the top of my favorite Sondheims, but its anniversary is worth marking as a key point in the artist's evolution as arguably the greatest gift musical theater fans have ever received. Sondheim recently turned 80 and a Broadway theater will be bearing his name, a rare honor for someone still living, but a much deserved one.

The Company score includes "The Little Things You Do Together," "Sorry-Grateful," "You Could Drive a Person Crazy," "Another Hundred People," "Getting Married Today," "Marry Me a Little" (which actually didn't join the show until later revivals) and probably the two best songs, "The Ladies Who Lunch," which originally was sung by the incomparable Elaine Stritch, and the powerful "Being Alive." Here is Raul Esparza performing the song from the 2006 John Doyle revival.