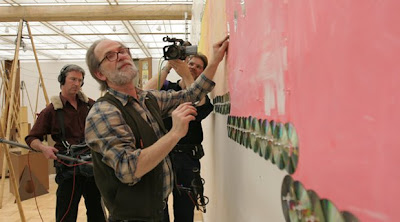 By Jonathan Pacheco
If you’ve ever been to the Seattle Experience Music Project, you may have seen this impressive display: a 60-foot-tall tornado of electric guitars, which all just happen to be playing themselves. The mastermind behind the ambitious project goes by his last name only, Trimpin. The German native is a...well, it’s hard to decide how to classify the artist. Is he a composer? Yes. Is he an inventor? Yes. Is he a sculptor? You could say so. The man’s work spans so many different media that it’s almost confounding. TRIMPIN: The Sound of Invention attempts to take a look at the man’s genius, observing him in his element as he creates personal projects and prepares for an experimental concert with the Kronos Quartet.

If you don’t know why this pairing is noteworthy, you should know that the music of Trimpin is very mechanical; the man creates machines that play automatic rhythms by beating tiny hammers inside wooden clogs. He converts piano player rolls to MIDI files and controls his pieces that way. Most impressive is the Seismofon, a giant array of tubes creating noise based on earthquakes around the world. Yes, you read correctly. Reading earthquake data from the Internet, different numbers on the Richter scale are interpreted into different notes, and earthquakes on different continents are played in different scales. The Kronos Quartet, as diverse as their musical choices can be, are still a string quartet (I know you’ve heard their work; they performed the legendary Requiem For a Dream score).

TRIMPIN does a surprisingly good job at building up to the concert event while still giving us insights into Trimpin’s other works and his process. You’ll see him gathering materials for a project and all of a sudden become infatuated with an accidental sound. He’ll discover new noises and ideas while polishing an almost-complete project. With cameras rolling seemingly all the time, there’s very little narration by Trimpin himself. Rather, it’s done by colleagues or fellow artists who are all as perplexed by the inventor’s process as we are. At times this can be a little to heavy on the praise, as the entire documentary can be. Really, the only negative you can find about Trimpin in this film is in a hilarious scene during the brainstorming sessions for the Kronos concert. For a grand finale, Trimpin suggests smashing a violin, mimicking the cliched smashing of the rock and roll electric guitar. The Kronos fellows all vehemently object and almost take offense. They’d never do that to their babies!

But this lack of conflict can keep the otherwise great documentary from reaching a new level of depth because really, most of the anticipation in the entire film is created by the ever-changing plans for the concert. That’s not to say that the documentary has to try and dig up dirt on what seems to be a good man, but if there was any conflict to be had, a film is better served by it. Otherwise, it just feels like you’re waxing the guy’s car for 90 minutes. The film would also benefit from a designing eye, or the work of a typographer. There are a good amount of titles on the screen, and, from an aesthetic eye, a lot more could be done to increase their impact. As they are created presently, I personally found them a little distracting in the “I just threw text on the screen” sense.

The only reason I saw TRIMPIN was because, once I received my SXSW badge Saturday evening, it was the only film I had the time to make it to, but I’m glad I did. It was surprisingly engaging and satisfying.