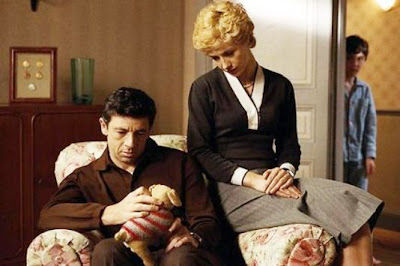 By Edward Copeland
Films relating to the Holocaust seem to have been more plentiful than usual in 2008. However, Claude Miller's French film A Secret doesn't go the usual route of depicting the horrors. In fact, it goes out of its way to strip the story of its drama and while the acting is good and individual set pieces are nice, the overall film is a puzzlement.

Told mostly in flashback, A Secret focuses on a Jewish family in Paris trying to survive and make a plan as the Nazis move in. The father Maxime (Patrick Bruel) is pretty much a nonpracticing Jew anyway and he'd like to keep it that way, but his wife Hannah (Ludivine Sagnier) is more devout and feels it's wrong to deny her heritage.

Much of this past is unknown to Maxime's youngest son Francois, who was born after the war and similarly rejects Judaism until he faces ugly anti-Semitism and the family's maid starts filling him in.

For a film with a title such as A Secret, you'd expect it to be a bigger one, but the strange thing about the movie is that it shows what happened in the past but then fails to depict a followup. We never see Francois' reaction to his family history or even a meeting of new understanding between the adult Francois (Mathieu Almaric) and the aged Maxime.

As a result, A Secret plays like a gun whose trigger has been pulled but whose chamber never empties.