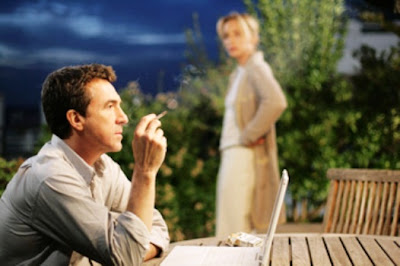 By Edward Copeland
Why does it seem that American films of late seem to equate suspense with gore and shock and you have to travel across the ocean, at least cinematically, to get a good dose of psychological thrills such as Guillaume Canet's Tell No One.

The French seem particularly adept at this genre and though Tell No One becomes too complicated for its own good once the resolution arrives, it's still a helluva ride getting there.

Francois Cluzet stars as pediatrician Alexandre Beck, completely in love with his wife Margot (Marie-Josee Croze) until they are attacked on a getaway and Margot is murdered, or was she? Eight years later, Beck begins to have doubts when he receives a mysterious e-mail that appears to show Margot alive and urges him not to tell anyone because they are being watched. The mystery deepens from there.

Beck was originally suspected in his wife's murder until a serial killer was convicted for the crime. When the strange happenings begin to occur again eight years later, Beck once again finds himself the innocent man wrongly accused.

It's hard to write in much detail about Tell No One since so much is dependent on the plot. Canet keeps the pacing taut, though he has take some of the blame for the ending muddle since he's also the screenwriter. It is based on a very popular novel in France, though I can't vouch for how faithful it is, but something really needed to be done to find some clarity in the final act.

The performers are all good including Kristin Scott Thomas as a wealthy and powerful lesbian who is the lover to Beck's sister. Thomas seems to be finding more of a career in French language films of late than in English language ones.

Tell No One is a pleasant surprise, especially for those looking for a couple hours of suspense without buckets of blood.