Not another film about penguins 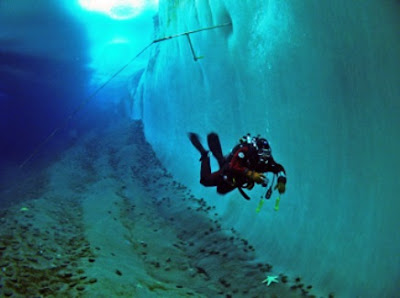 By Edward Copeland
The title of this post is what Werner Herzog told the scientist who invited him to make an expedition to Antarctica to make a documentary. Despite his initial protest, there is a brief section involving penguins in Encounters at the End of the World, but mostly it's about the least well-known continent.

While Herzog seems to be turning more and more toward documentary filmmaking in his later years, Encounters, while beautiful and fascinating at times, doesn't quite reach the levels he achieved with Grizzly Man or Little Dieter Needs to Fly.

The film boils down to anecdotes, which is fine, but sometimes the anecdotes aren't fleshed out enough for the viewer to maintain interest. There are many sequences with various scientists and researchers that don't really explain what it is they are specifically researching.

There are fleeting references to climate change and undersea life, but when scientists grab samples, we don't really know what the samples are from or what they do with them.

The most interesting part of the film turns out to be a portrait of a small town that has sprouted in Antarctica which even has, much to Herzog's dismay, a bowling alley and an ATM machine. No Starbucks was mentioned.

In the town, he meets all sorts of people who have just sort of found themselves in Antarctica, including a linguist who came there to try to record and save a dying language only to fail in his effort but stayed anyway.

Since Herzog called his film Encounters, maybe this is what he was after, but somehow it just doesn't really hang together well as a documentary. It has the same problem as fiction films that are a collection of unrelated short films: some segments are inevitably better than others.