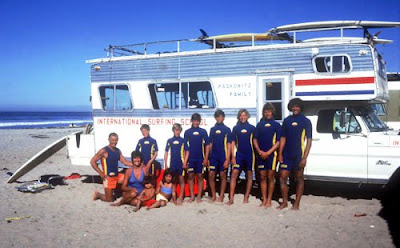 By Edward Copeland
When you hear about a documentary titled Surfwise, you'd be right to guess that its subject is surfing and while surfing is certainly central to the story it tells, this is more an exploration of the unusual Paskowitz family.

Dorian "Doc" Paskowitz, who became a doctor after attending Stanford Medical School in the 1940s, is an unusual character to say the least. We first see him nude, 85 and performing calisthenics. Obsessed with his Jewish heritage and sex (he says that a woman who taught him how to "eat pussy" changed his life), his third marriage was the charm and he began a nomadic life with wife No. 3 with whom he raised nine children in the cramped quarters of a series of mobile homes as they became known as the first family of surfing.

He didn't send his children to school, insisting that there was a difference between knowledge and education. I have to wonder if David Milch didn't get some of his inspiration for his HBO series John From Cincinnati from the Paskowitz family, though no one levitates here.

Needless to say, things aren't as hunky dory as they seem as first in Doug Pray's documentary as you soon realize that Doc is as unstable as the dad in The Mosquito Coast who finds it a betrayal each time a child grows up and decides to leave the fold for a life of his or her own.

Pray builds his film well, saving his suckerpunches for the second half, though the film's ending reunion seems slightly forced.